What are these large yellow circles painted across the runway?

There are not many yellow markings on a runway. This row of six is painted about 400m from the threshold at both ends:

What does it mean for a pilot? Why yellow?

That would be the "line" telling military pilots where the arresting cables are. If you look to the side of those circles, you can see the arresting mechanism these. It would be yellow so that it would still stand out to the pilot and not be confused with the white runway markings.

You can find more about them here.

A large number of airports in the world are used for both civil and military operations and quite a few of these have arresting systems installed on them. According to Boeing Aero No. 13:

Of the nearly 36,000 airports around the world that are classified as civil, military, or joint-use, approximately 3,800 are used for scheduled commercial service. Worldwide, an estimated 2,000 aircraft arresting systems are installed at facilities in 64 countries.

The location of the cable is marked on the runway by a series of reflective discs 10 ft (3 m) in diameter painted "identification yellow." These discs are laid out with 30 ft (9.1 m) between centers and extend the full width of the runway.

The location of a permanent aircraft arresting system that crosses operational runway pavement will be identified by a series of reflective circles 10 feet (3.05 meters) in diameter and painted solid yellow (striated marking will not be allowed) on the runway. The circles will be 15 feet (4.57 meters) apart from edge to edge and extend the full width of the runway. The middle two circles will straddle the runway centerline. 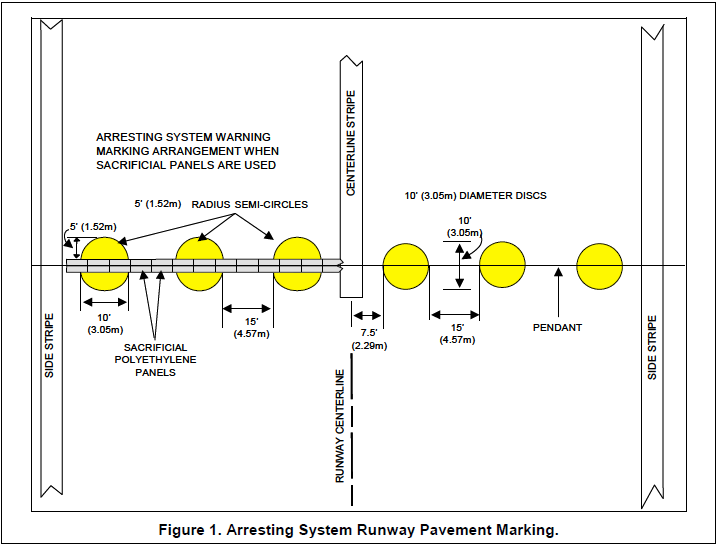 The distance from threshold indicates whether most of the operations are conducted under visual or instrument meteorological conditions.

Image from Boeing Aero No. 13

6
What is the rationale behind placing arrestor gear on a long runway?

12
Why five touchdown zone markings for only one aiming point?
10
How do pilots use stopway, EMAS, clearway and displaced threshold?
31
Does runway 32/33R at Madrid actually have a kink in it?
10
How will aiport operations at KOAK be affected when taxiway W is promoted to a runway?
13
Why is the aiming point distance shorter in the US vs. Europe for long runways?
3
What are these protuberances on the north edge of runway 10/28 at Mataveri?
29
Why is one of Madera Municipal's runways labelled with only "R" on both sides?
26
Why is it runway "1" instead of "01" in America?
11
Is there a standard for required repainting of worn runway markings? In USA
18
What's this turquoise stuff covering the overlap between the blast pads of KBOS runways 04L and 09?