What do the white dumb-bell signals indicate?

4.2.3.1 A horizontal white dumb-bell (Figure A1-4) when displayed in a signal area indicates that aircraft are required to land, take off and taxi on runways and taxiways only. 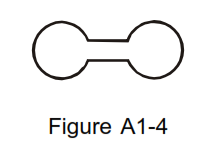 4.2.3.2 The same horizontal white dumb-bell as in 4.2.3.1 but with a black bar placed perpendicular to the shaft across each circular portion of the dumb-bell (Figure A1-5) when displayed in a signal area indicates that aircraft are required to land and take off on runways only, but other manoeuvres need not be confined to runways and taxiways. 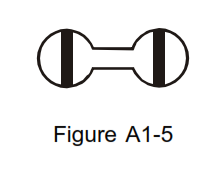 Please try to elaborate on the text from Annex 2, and give examples of practical use of these two signals.

These symbols are intended for old-fashioned "airfields" which just have a large grass area instead of a runway. This used to be the norm before the increasing weight of aircraft in the Second World War. The whole surface of such a site is suitable for the movement of aircraft, so you don't need to be on a particular runway or taxiway: you can just take-off and land in the wind direction.

This was the norm when the ICAO rules were drawn up, so the case of only being allowed to operate on a particular surface was the exception then, not the rule. The runway-only aerodromes probably wouldn't have their grass in good condition, so it would be dangerous to land on grass: you might put your undercarriage in a rabbit hole. Back then, when most aircraft didn't have radio, you would have needed a signal at the unusual runway-only aerodromes so that visiting pilots wouldn't assume it was OK to land where they liked. The signal would more likely be a permanent fixture at these aerodromes, rather than something flown at particular times.

Nowadays, the only situation where this is common is in glider flying. At a popular glider site, there might be a hard runway provided for the tow airplane or for winch launches, but gliders can land anywhere on the aerodrome. Or there might be a marked (hard or grass) runway for take-off and landing, but no taxiways at all: you just vacate onto the grass. As Jay Carr points out, a fly-in or a gliding competition would be an example of when a particular aerodrome might change from one to the other, but that might go either way. The same aerodrome where normally everyone lands on grass might be worried about the condition of the grass at a high-traffic event (and about the safety implications of a variable landing direction), so they might have people stick to the runway for that one event.

I keep thinking of some of the big fly ins (like Air Venture in Oshkosh) where pilots are allowed to park on the grass.

During the fly in they might use that second symbol (dumbbell with stripes) to let people know it's okay to park on the grass, but you still need to take off, land, and taxi on official taxiways and runways (as defined by the event rules). Thus significantly increasing capacity during the event.

But during other weeks that same airport probably doesn't want anyone taxing onto, or parking on, the grass. So they would display the first symbol (dumbbell with no stripes) to remind everyone that the exception is gone, and the rules have changed back to what you would normally expect at most airports. Thus people would be aware they need to stay off the grass and use official tie down areas for parking.

In essence, I think the first symbol exists mostly because of the second one. At airports where there are occasionally exceptions along the lines of those described above, they may also want a symbol to help pilots know when the exceptions are not in effect.

Not the answer you're looking for? Browse other questions tagged airport-markings or ask your own question.

38
What is this star shaped symbol on the tarmac?
15
What are these markings on the runway at Haneda Airport?
22
What are these symbols on the runway?
16
What are the areas marked in green around the taxiways?
28
What is this white rectangle painted on runway 23 at KCRW?
3
What regulations discuss the red/white marked areas on a tarmac at a terminal?
6
What is the meaning of this airport marking?
3
Does lack of a curved taxi-line indicate a turn is not permitted?