Radio communications lost on climb out in IMC: when can I turn on course?

My plan is to climb to 6000 as filed but I can't turn northbound on course because of obstacles. When can I turn on course? Is the proper procedure to fly the back side of the localizer westbound till I reach 6000 and then turn?

Your assumptions are insufficient.

If your clearance just states "CLIMB 6000 direct", and there are obstacles along the route, you have been given an incorrect clearance.

It should have included the phrase "EXPECT" and an altitude and possibly also a time that would permit you to clear the obstacles.

Also, from your Skyvector link, it looks the Direct course parallels V97 very closely, which has an MEA of 5000, so you should not encounter any obstacles at 6,000. Once you reach your clearance limit LOZ, you may initiate the approach. 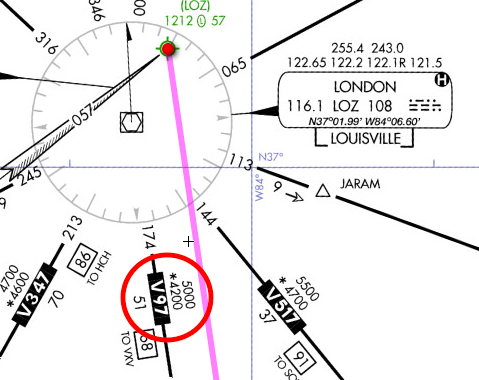 Nevertheless If you lose comms you are expected to climb to the hugest altitude of 1. Your last clearance altitude 2. Minimum IFR altitude. 3. The altitude you were told to expect

No, you will squawk 7600 and continue on your flight plan to your destination as filed. The airspace has already been cleared for you during your flight time.

The obvious answer is: turn on course when you can safely do so. In reality, though, you - hopefully! - shouldn't find yourself in this situation anyway, because it would mean that something strange happened with your clearance.

d. Route of flight. Specify one or more of the following:
1. Airway, route, course, heading, azimuth, arc, or vector.
2. The routing a pilot can expect if any part of the route beyond a short range clearance limit differs from that filed.

So your departure clearance should have both the clearance limit (KLOZ) and the route, maybe something like this:

Obviously the details may be different, but the point is that if ATC didn't give you specific instructions on the initial route - even if it was just to expect vectors - then you should have asked for them. Otherwise you're taking off into IMC with no idea which direction to fly in. KDKX is uncontrolled and there's no tower to give you an initial heading after takeoff, but it would be surprising if you didn't get something in your clearance, considering that taking off from 24 puts you under McGhee Tyson's class C almost immediately.

But let's say that you got the clearance I mentioned above and your comms failure happens after you enter IMC but before you can contact Knoxsville Approach for your vectors. 14 CFR 91.85 says you should fly:

If being radar vectored, by the direct route from the point of radio failure to the fix, route, or airway specified in the vector clearance;

In the absence of an assigned route or a route that ATC has advised may be expected in a further clearance, by the route filed in the flight plan.

That means ATC will expect you to fly directly to KLOZ but obviously they don't expect you to fly into a hillside or transmission tower if it's in your way (and they know as well as you do that those obstacles are there). As PIC you have to make a decision on what the safest thing to do is in the situation, considering the class C nearby, any traffic you heard (or can still hear), local weather conditions and your aircraft's capabilities. Personally, after squawking 7600 I would make a left turn back east - to remain clear of the class C and the towers NW of the field - and climb over or east of KDKX until reaching a safe en route altitude. Then I would continue directly to KLOZ as filed, still climbing if necessary to reach my cruising altitude. But that's just one option, another 'obvious' one would be to fly the published ODP:

But if I hadn't briefed the ODP - which I should have, especially in relatively low IMC - because I was expecting vectors, there's no way I would try to dig it out and brief it on the spur of the moment.

19
Lost radio communication after take-off in IMC - what are my options?

19
Lost radio communication after take-off in IMC - what are my options?
14
Can I do a VFR climb-out on IFR flight plan?
5
How soon can I start my turn after reaching the missed approach point, when missed approach procedure calls for a climbing turn?
2
What course of action to take when having to go missed during IMC and lost comms?
1
How can I figure out the take-off minimum when multiple minimums are listed in the TPP?
1
Can Instrument Approaches be carried out when RVR is not given for the full runway length? (Approach Ban)