Will optimising the weight distribution of a commercial flight save fuel?

Since the centre of gravity must lay in a certain location, I'm wondering if it would save fuel if it lays exactly in the right spot?

Let's assume that you have an A320 and weight distribution is fine (within tolerance). If ballast is shifted until COG is located at the perfect location, would you save fuel? How much would that be?

For precisely this reason the A310-300 had a fuel tank in the horizontal tail. However, the pilots I spoke with (Pan Am) did not understand the purpose and insisted that the tank is empty all the time. The A330 and A340 also have a tail fuel tank, and here its fuel level is automatically controlled. 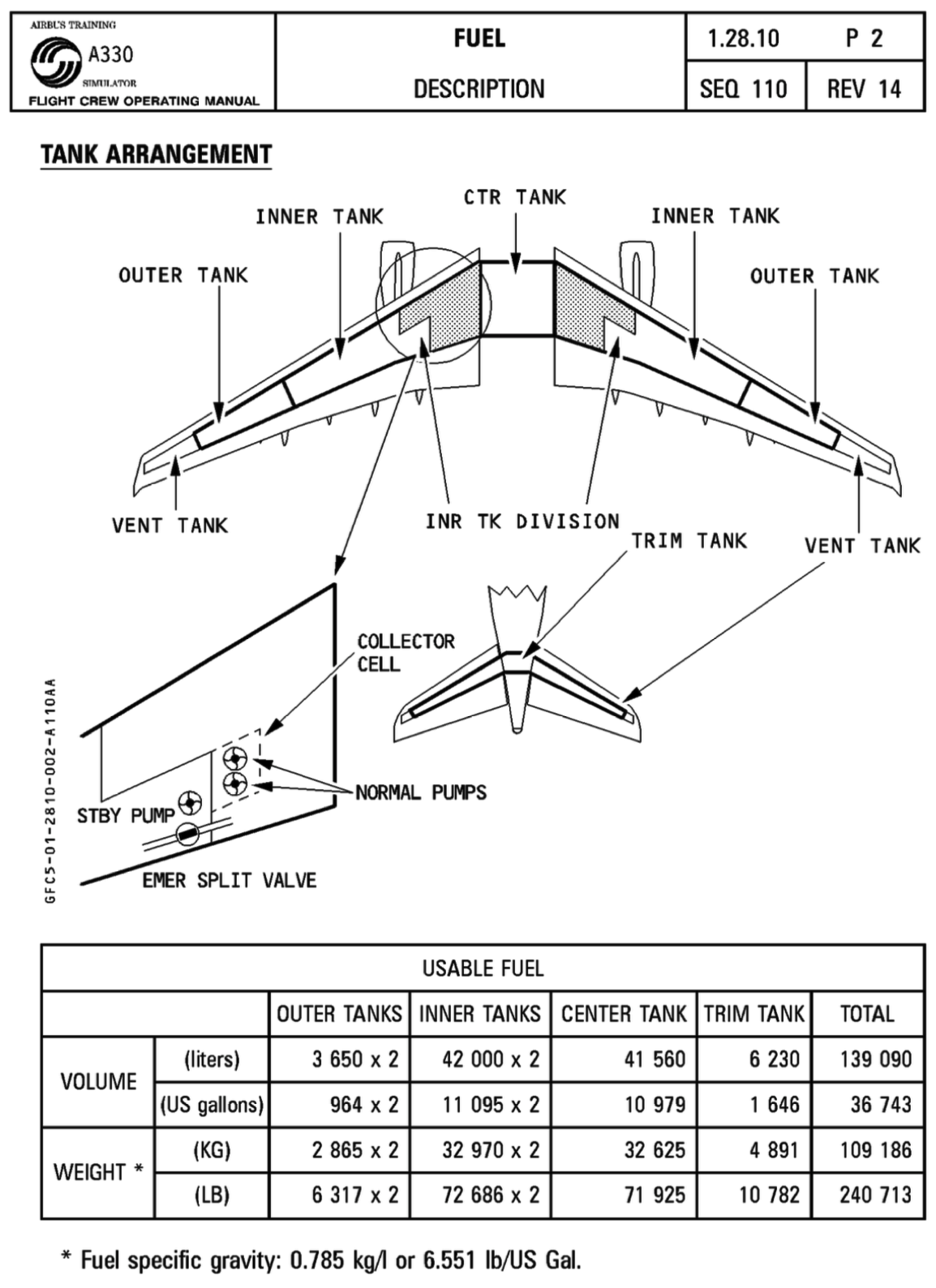 A330 tank arrangement (picture source). Note the trim tank in the horizontal tail.

Shifting the c.g. a little back reduces drag slightly (less than 2% reduction in fuel consumption, depending on initial c.g. position) but also static stability. This is no problem when the FCS adds enough stability, but in case of a system failure you should make sure that the rear tank can be emptied soon. Hand flying an aircraft with relaxed static stability is tiring.

The A350 did away with this feature because it was felt that the added complexity would outweigh the benefits.

Short answer: yes it can. Long answer: Yes, but this may not always be practical for a given passenger manifest and cargo. On a dynamically stable airplane, a aft CG is more beneficial, since it reduces lift generated by the tailplane, thereby reducing induced drag on the wings.

Not the answer you're looking for? Browse other questions tagged commercial-aviation weight-and-balance or ask your own question.

36
When might a pilot hand-fly a jet at cruise altitudes, and is it difficult?
12
Is A380's center of gravity really too far back?
-9
Chemtrail Conspiracy theory
2
Do horizontal stabilisers provide any lift?

29
Is passenger weight distribution important on a commercial flight?
0
If a tail dragger is converted to a tricycle gear airplane, what will be the effect on weight distribution?
3
How much weight does removing a vacuum system really save?
7
What is the typical weight distribution ratio between nose gear and main gear?
9
Does the avoidance of thrust reverser save fuel?
2
Flight Control Weight limitations
2
How is unusable fuel taken into account in weight and balance calculations?
1
How is the Max Zero Fuel Weight used in calculating weight and balance?