Would there be any advantages to a wing with a concave upper surface?

A wing with a concave upper surface could have the same area as one with the normal convex shape of an aerofoil.

I can think of many potential disadvantages: additional complexity of design and construction, reduced volume for fuel tanks, having rain fill up rather than run off the the wing.

Could there be any advantages to such a design? Has it ever been tried, or studied?

For clarity, this is the kind of cross-section I have in mind. Yes, it's ugly, and I don't think that better draughtsmanship would improve it.

The idea behind this design seems to be that the principal cause of lift of a wing is that the top has a larger area than the bottom, so if we substitute a top surface with a different shape but the same area, we will still get similar lift.

This is the idea behind the equal-transit-time theory of lift, which is incorrect, disagreeing in several ways with with actual observations of air flowing past airfoils and the lift forces that result. NASA has produced a basic but thorough refutation of this theory; among the points they make are

There are modern, low-drag airfoils which produce lift on which the bottom surface is actually longer than the top.

What you generally want in an airfoil is for it to establish streamlines that carry the air at very high speed over the top and shoot it downward past the trailing edge. The speed is not determined by the surface area or length along the top surface; the speed is determined by other things, and two air molecules that start near each other but go on different sides of the wing (one on top, one on the bottom) get to the trailing edge when their respective speeds carry them there, generally not at the same time as each other.

Putting a big hollow space on top of the wing where the air can pile up and then forcing it over a second hump to get to the trailing edge seems counterproductive. It might just lead to the wing stalling at relatively low angles of attack, which would limit the amount of lift you can get from it. But I am not an airfoil designer, and I don't know exactly what the result would be.

A wing with an inward (concave) surface on the top will generate negative lift for many positive angles of attack, and really not much lift at all. Curving the top surface is basically creating an upside down airfoil (because lift is negative). 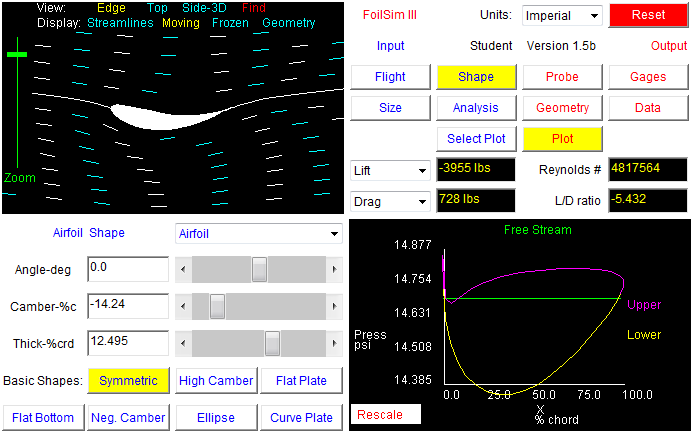 You can see we are generating a lot of negative lift (-3955 lbs) and a lot of drag, resulting in a large (negative) L/D ratio.

Lets increase the AoA until we get a slightly positive lift coefficient: 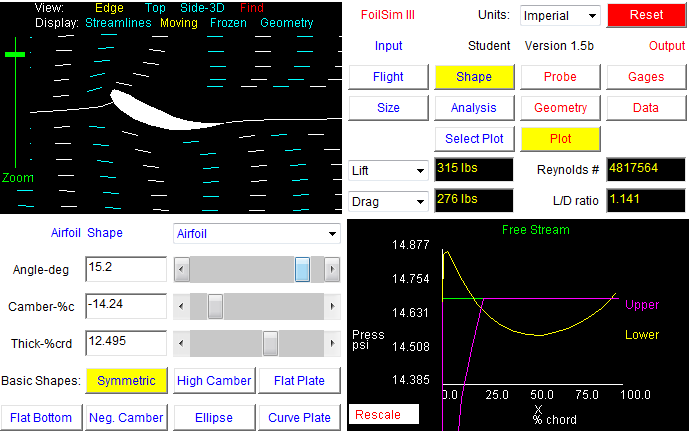 You can see that the AoA is extreme for a small amount of lift, barely overcoming drag. The AoA of 15.2° is required which brings the airfoil basically into stall because the flow is going to quickly separate from the wing.

Compare all this to a "normal" airfoil: 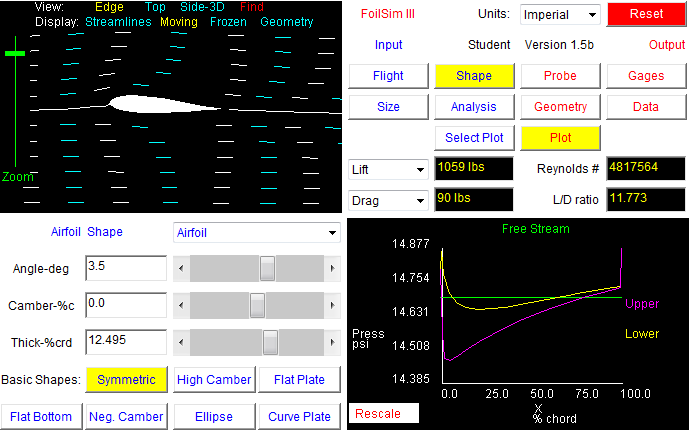 Well, wing produces lift by accelerating the air downward. That's a result of third law of motion (principle of action and reaction). And it applies at each point along the wing—the lower the pressure, the higher the lift, but also the downward acceleration of the air flowing over the wing.

Now that only works to a certain point. If the surface curves too fast, the air won't be able to follow it any more due to inertia, will detach and the pocket underneath will fill with stagnant air at ambient pressure, eliminating the suction and the lift with it. That is stall.

Your wing needs higher curvature at the two humps to compensate for the concave part generating negative lift. Mainly the first hump is critical, because increasing angle of attack only increases the curvature near the leading edge (while flaps increase it further aft). So I would expect your wing to stall earlier.

I would also expect the wing to have higher form drag, because there would be more changes to the flow conditions and each such change means losing some energy to viscosity.

Also above compares wings with the same coefficient of lift. To achieve it, your wing would probably have to be thicker as it needs to compensate for the negative lift in the middle part. Which is another reason for having higher form drag, too.

No advantage in sight anywhere.

10
How would an airfoil react if it was flown backwards?

9
Are there any contemporary advantages in favor of wing warping?
12
Is there any application where the crescent wing would be the best wing planform?
12
What advantages come with the wing on the Boeing Bird of Prey?
0
If we use upper surface blowing and externally blown flap on the same wing will lift correspondingly be very high?
3
Does a rotating control surface change the wing area?
8
What are the circled features on the upper surface of the A380 wing?
2
How do wing tip vortices that interact with the wing surface affect drag?
23
How would a belt sander wing perform?