What happens if Solar Impulse II encounters un-expected head wind and runs out of battery power?

I noticed that battery charge level dropped to fair levels in some occasions in this article. It dropped to around 20% at the end of day 5 before morning of day 6.

To what extent will a flight be affected by unexpected strong head wind that results in lower Eastward ground speed and delaying time to next sun shine and battery runs out? 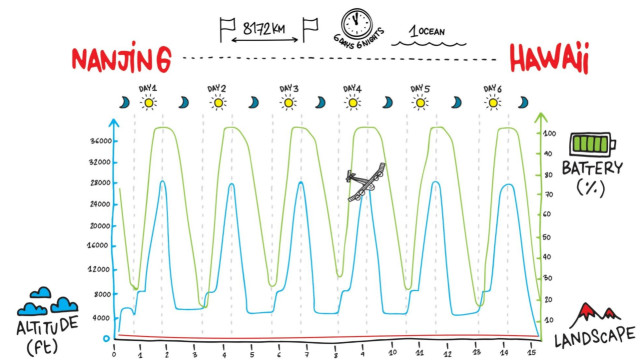 I tend to think weather prediction is quite good nowadays, what is the plan if this happens on long ocean flight? Does the ocean have thermals where a glider can stay up 'forever' while waiting for morning sunshine?

On Solar Impulse, or similar 'experimental' (at the edge of limits) flights, like the solo circumnavigation balloon flight, do they usually have a 'chaser/spotter' plane flying along?

Solar Impulse has two means to store energy: Batteries and altitude. Weather permitting, both will be fully charged at sunset, and mostly depleted over the night. The rate of depletion at sunrise depends only on the time between sunset and sunrise, not on the direction and strength of the wind.

Headwind only means that less ground is covered. Solar Impulse is optimized to fly at a certain speed and will not fly much faster or slower, regardless of wind. If the wind is strong enough, it will simply not cover any ground but be blown back. But the wind will not cause the batteries to be depleted earlier, and the next day they will be recharged if the sky is clear.

Wind speed and direction vary with altitude, so the aircraft might well overcome a wind that had prevented it to make any progress the night before by flying at a different altitude the next day. After all, flight duration is limited by the pilot, not the power source.

If the battery level goes to low, due to poor planning or an bad weather forecast (winds end up less favorable than forecast) then solar impulse doesn't make it to its destination. If they are over water they crash into the water.

Look, solar impulse is a totally impractical aircraft, built to give the two pilots some records. Everything about the aircraft is impractical and dangerous. There isn't enough power for a decent climb rate or cruise speed. Even a quite common low altitude headwind would be enough to have the aircraft flying backwards. There isn't enough energy storage for sufficient range to safely go any reasonable distance. The structure had to be built extremely light weight so the aircraft is fragile (can't take much turbulence). And there is no way to overcome these limitations with further development.

The maximum solar power reaching earth is about 1kw/sqM, and this is only achieved in clear sky's, when the solar cells are directly facing the sun. Since there is no way to have the solar cells face the sun on an aircraft (the cells have to be flush with the airframe) this means that most of the day you will get even less than 1 kw/sqM (half of the day you will get zero).

To put this in perspective this would mean a light aircraft, like a Cessna 172, would receive a maximum power of 10-15kw of solar energy over the entire airframe. In reality, using very expensive cells with the best efficiency available, the actual energy collected would be more like 3-5kw. A Cessna 172 is a very low powered, low performance aircraft but even still, it gets about 120kw of power from its little 4 cylinder Lycoming engine. The 3-5 kW of electricity that a solar Cessna 172 could collect in the most favorable conditions wouldn't be nearly enough to keep the airplane in the sky. And again, this comparison is not about trying to make a solar powered commuter airliner or something of similar performance, there isn't enough sun for even the lowest performing human carrying aircraft.

Not the answer you're looking for? Browse other questions tagged weather glider solar-impulse or ask your own question.

10
How does lowering altitude conserve energy in Solar Impulse 2?

10
What considerations drove the choice of the Solar Impulse engines configuration?
5
What is the reason for different engine configurations seen on Solar Impulse?
4
What would be the stall speed of Solar Impulse?
8
When the winds aloft are light and variable, what wind direction and speed should I use for flight planning?