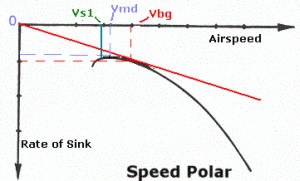 Thankfully, quiet flyer reminds me in the comments that I need to point out that I always talk about true air speed here. If you want to set your speed using the speed indicator, reduce the value by the applicable density correction.

(it's simpler than it may looks) 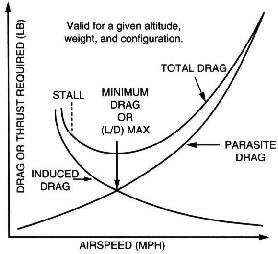 In this answer, we'll confine ourselves to steady linear flight with the wings level.

Because that is where D (Drag) is at a minimum. Nothing else matters.

Keep in mind that Drag is proportional to the product of the drag coefficient-- which increases as we increase the angle-of-attack-- and the square of the airspeed.

Other answers give additional insight as to why the point of minimum Drag occurs where it does-- it is the point where Induced Drag and Parasite Drag are exactly equal.

By the way, the ratio of L/D is exactly equal to the ratio of Cl / Cd, where Cl and Cd are the coefficients of Lift and Drag. Unlike Lift, Cl is not nearly constant across a wide range of angles-of-attack or airspeeds. It is always much greater at high angles-of-attack (low airspeeds), at least until we get very close to the stall angle-of-attack. Cd is also always much greater at a high angle-of-attack (low airspeed) than at a low angle-of-attack (high airspeed). So we can also say that the maximum glide ratio occurs at the maximum ratio of Cl to Cd. Lest there be any confusion, we should also observe that this is the point of minimum Drag, but not the point of minimum drag coefficient. If we were flying at the angle-of-attack for the maximum glide ratio, and we then moved the stick or yoke forward to reduce the angle-of-attack (and increase the airspeed), this would reduce the drag coefficient (as well as the lift coefficient), but this would also increase Drag, and would decrease L/D and Cl / Cd.

In comments you indicate that you want to know how best glide speed varies with weight. A good approximation is that it scales up or down in proportion to the square root of any change in your wing loading. In gliders where we don't have drag from a windmilling prop to complicate things-- or in any airplane where we've stopped the prop-- this should be exactly true, except for effects due to changes in Reynolds number.

For completeness, we should say something about where the minimum power-off sink rate occurs. That turns out to happen at the angle-of-attack that gives the maximum value of (Cl cubed) / (Cd squared). This always occurs at a higher angle-of-attack (lower airspeed) than does the best glide ratio.

Not the answer you're looking for? Browse other questions tagged aerodynamics flight-dynamics cessna-152 or ask your own question.

41
Why would a glider have water ballast? If it is trying to stay aloft without an engine, wouldn't it be better to be as light as possible?
19
What is the stall AoA for the space shuttle?
17
Why is max endurance different for jet and props?
9
Is induced drag essentially nothing more than a specific type of form drag?
13
How are the glide polar and L/D ratio charts related?
6
Is the maximum lift-drag ratio found at minimum drag?
3
Is V(L/D)max equivalent to best glide speed regardless of weight, engine, height, etc.?
1
How do you calculate the optimal cruising speed of an airfoil?

2
Regarding the 1902 Wright glider. Why is the airspeed, Va, calculated adding the ground speed, Vg, and wind speed, Vw?
9
Comparing the Lilienthal and Wright gliders, which one had a better glide ratio?
15
What is the optimal bank angle to accomplish a given turn in a glide?
16
Why is the magneto drop check done at 1700 RPM?
4
Does full nose up trim yield best glide in Cessna 172/152 for a given load?
3
Which is safer? The Piper Tomahawk or the Cessna 152?
9
How can best glide speed be lower than best rate of climb speed?
3
Is it feasible to replace a C152's engine with multiple small turbine engines?
5
How can L/D Max be both Best Glide speed and Max Range speed?