How does the angle of attack vary in turns?

Just to avoid some confusion that I feel in your question:

That is, it doesn't happen by itself. The pilot or autopilot must actively pitch up (and possibly do other adjustments, e.g. increase thrust). Without active control, the angle of attack will stay about the same (initially), and the airplane will start descending if it enters a turn, because the lift becomes insufficient for level flight (see pictures in other answers).

The aircraft turns to change its speed vector. The absolute value of the vector stays the same, but its direction is changed. A force is needed to change the direction of movement of any mass, and the wing is used to provide this force in addition to the lift force. This is why lift is increased in a turn. 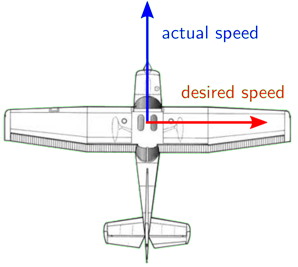 For turning, the aircraft needs to add a force in the direction of the red vector in the sketch above. This it can either do by pointing its nose to the right, and then the fuselage will create a small lateral force, albeit at a heavy price in drag. Or the airplane uses its wing to provide this force, which is a much cleverer way of creating the desired force because the wing is by far the most efficient "force generator" of an aircraft. 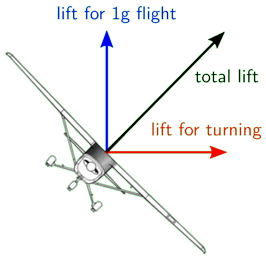 Note that as the turn progresses, the red vector will point in the opposite direction of the initial (blue) speed vector, which means that the speed in the initial direction is reduced to zero when a 90° turn is completed. The horizontal component of the lift force accelerates the aircraft in the new, desired direction and decelerates it in the old direction.

The AoA in a turn will be higher than in level flight IF the same airspeed and level is maintained. Reason being, in a turn some of the "upwards" (relative to the lateral axis) force generated by the wing is used to turn the aircraft around, so more lift needs to be generated to maintain altitude. To generate more lift at the same airspeed, the angle of attack has to increase.

This image illustrates it nicely: 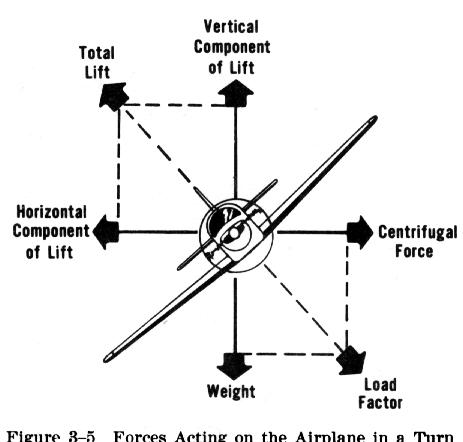 (consider the "Total Lift" vs. the "Vertical Component of Lift")

24
What does it take to turn a 747 around 180 degrees?
13
What is the method to calculate a finite wing's lift from its sectional airfoil shape?
4
Can hypersonic aircraft be agile without the G forces harming the pilot?