What is the longest range single-pilot certified (FAA and/or EASA) business jet?

I suspect the single-pilot business jet with the longest range is the SyberJet SJ30x:

But I am not sure; also, there are many negative reviews regarding SyberJet company and its aircraft of which, by the way, only a dozen have been produced for now. Are there any single-pilot certified jet with longer range in comparison with SyberJet SJ30x?

There aren't any civilian, current-production jets that come close to the range of the SJ30 for single pilot operations based on my research, although one or two turboprops have comparable ranges. I consulted Aviation Week's "Business Airplane's 2012" and the only other light jets listed with a long range are the Embraer Phenom 300 with a range of 1,954 nm, and the Cessna Citation CJ4 with a range of 1,913 nm. The Cessna CJ3 comes in at a respectable 1,869 nm. The PC-24, which is still undergoing certification in 2016, is listed here with an NBAA range of 1,950 nm. All of these are (or will be) single-pilot certified in at least one cockpit configuration, to my knowledge.

Is there any reason you're restricting this to jets and not turboprops? (Speed is one of the biggest differences between the two categories.) The King Air 350IER has a range of 2,239 nm. Several other turboprops have ranges that are comparable to average light business jets, like the PC-12 NG which has a range of 1,544 nm.

Here's a graph of my own making to show these statistics: 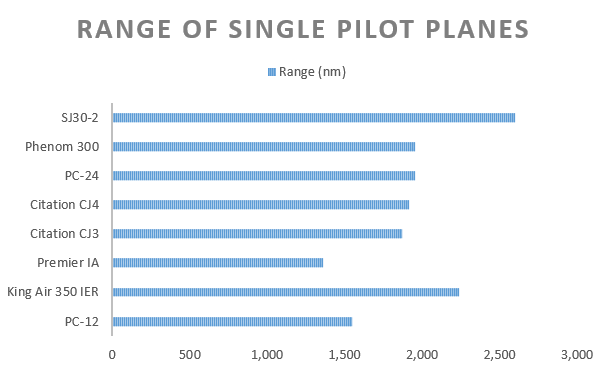 For any readers unfamiliar with the restrictions regarding FAA approval for single-pilot operations, here's a good source: http://www.flyingmag.com/single-pilot-jets . The biggest stipulation is that transport category aircraft (12,500+ lb MTOW or not commuter category) are assumed to be two-pilot aircraft.

There are only a hand full of single pilot jets in production currently and the SJ30x seems to have the longest range by far. The other competitors in the space, the Cessna Citation Mustang, The Honda Jet and the D-Jet come in roughly in the 1300-1500 mile mark which is far less than the SJ30x.

Depending on how far you are willing to stretch the planes you include many military fighters, many of which you can own (which are generally single pilot planes) have a range that competes with or exceeds the SJ30x.

There is another caveat to this as well. All of these planes can in theory be fitted with ferry tanks which can greatly extend their range for a single mission. Its generally impractical to do this on a constant basis but it can be done in one off scenarios.

The CJ4 is, with nearly 2000 nm. Some would say the SyberJet SJ30 but since you can't buy one yet the Cessna CJ4 is the winner in jets. And in turboprops the Beechcraft 350ER.

The SyberJet doesn't exist for practical purposes. The design has changed hands through at least 4 different manufacturers and only about 15 were ever built IIRC. Try looking for one on www.controller.com for one and you'll see that the brand isn't even listed because they've never sold one used.

If you want a long range single pilot jet, the best game in town is the Citation S/II with the Williams Engine FJ-44 engine mods by Sierra (called the Super S/II) or similar modder. They can hold ~5800lbs of fuel and with the new engines, they climb faster, cruise faster, and burn less fuel. They can go 2300-2600nm, depending on the upgrades. This is basically the same airframe as the Citation 1 & Mustang (500/501 airframe) and Citation II & Bravo (550 airframe, longer than 500), but with more fuel capacity and a very efficient supercritical wing.

The Citation Super S/II (Sierra's modded plane) has a maximum takeoff weight of 15000lbs, so it has stricter standards to meet than a "Part 23" aircraft which must be under 12500lbs. There is no jet that you can actually buy that weighs under 125000bs and can go 2600nm that I'm aware of, and believe me I have looked. That makes the Super S/II the closest thing I've found to an affordable single-pilot jet for long missions.

Not the answer you're looking for? Browse other questions tagged aircraft-certification range private-jets or ask your own question.

0
Does the SyberJet SJ30 really exist?