What course should be taken to make estimated calculations? 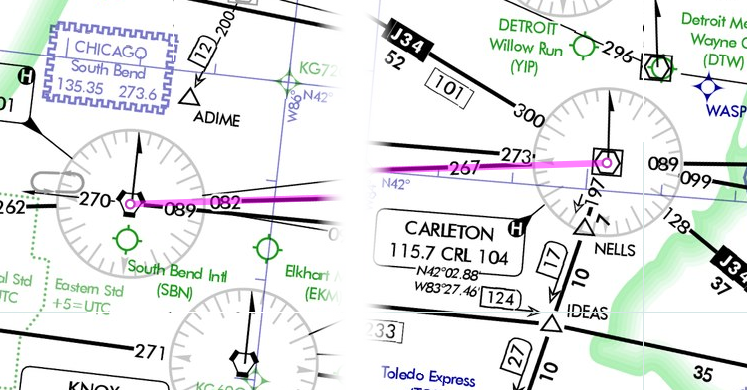 What I would normally do is to enter in the CX-2 flight computer the true course (calculated with a plotter) in order to get the ground speed; but I want to know if it is correct to get the true course by converting the known (shown on the chart) magnetic course by adding or subtracting to it the magnetic variation, whatever be the case.

I would calculate that leg in two segments. From GIJ to BENJO flying a course of 082 magnetic (50 NM), thence from BENJO to CRL on a magnetic course 087 (79 NM).

In addition, the magnetic variation is only applicable to hand plotting an arbitrary course using the map's orientation as a reference; IFR charts list true magnetic courses on their airways for ease of reference.

After that, you just need the winds aloft and you're off to the races!

I want to know if it is correct to get the true course by converting the known (shown on the chart) magnetic course by adding or subtracting to it the magnetic variation, whatever be the case.

It is not correct. When it comes to VOR stations, the 82 and 267 figures on the chart are magnetic radials, not courses.

RADIAL OUTBOUND FROM A VHF/UHF NAVAID

All Radials are magnetic

whereas for an LF navaid for example (note the distinction, radial vs. bearing):

BEARING INBOUND TO AN LF/MF NAVAID

All Bearings are magnetic.

Compass Roses are orientated to Magnetic North of the NAVAID which may not be adjusted to the charted isogonic values.

As the last quote reads, VOR stations may not be realigned after a change in the magnetic variation, this is also explained in the post 'Is my understanding of magnetic variation and declination (for a VOR) correct?'.

I think your plotter method you mentioned is the better estimate.

If you want a more official proof that discusses that specific problem, look no further than this FAA InFO. The issue became apparent to some users with RNAV procedures that use a VOR merely as a geometric point, and not a radial source dependent on when it was last aligned. The example they give is rather a big one: 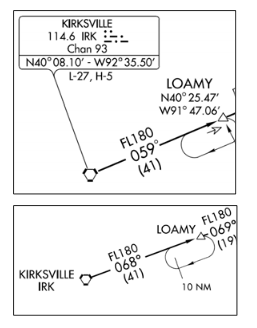 Not the answer you're looking for? Browse other questions tagged flight-planning aeronautical-charts flight-path magnetic-variation or ask your own question.

6
Why isn't the course fixed along an airway?
5
Is my understanding of magnetic variation and declination (for a VOR) correct?

18
After an emergency landing, what procedures should the pilot follow?
8
Are there any widely applicable models for plausible aircraft auto-routing?
7
What factors besides tail/headwinds cause the time taken to fly some routes to be different from the time it takes to return?
2
What criteria make an airport suitable for a technical stop for a large airliner?
8
How are you supposed to get the East/West variation on this question in the FAA PPL written exam?
4
Is this the correct sequence of steps to convert from true course to compass heading?
7
What should be the minimum time spent in cruise (for e.g. a B737)?
2
What official government document should a pilot check to determine what magnetic north a VOR was set to when it was commissioned?
19
Why would an airliner make a 90° course change?
0
When I use a plotter to identify a direction from a VOR, what heading or course is it exactly?