What level of damage to an aircraft is acceptable to let it depart?

Yesterday (28 June 2016), a Bombardier Q400 from EPGD to EPWA made an emergency landing because of a blown tire, spotted by a passenger. Everything went smoothly and the plane landed successfully assisted by fire trucks.

You can see the article and video here (in Polish).

In addition to the damaged tire, I've spotted that there is some damage to some parts of the plane: 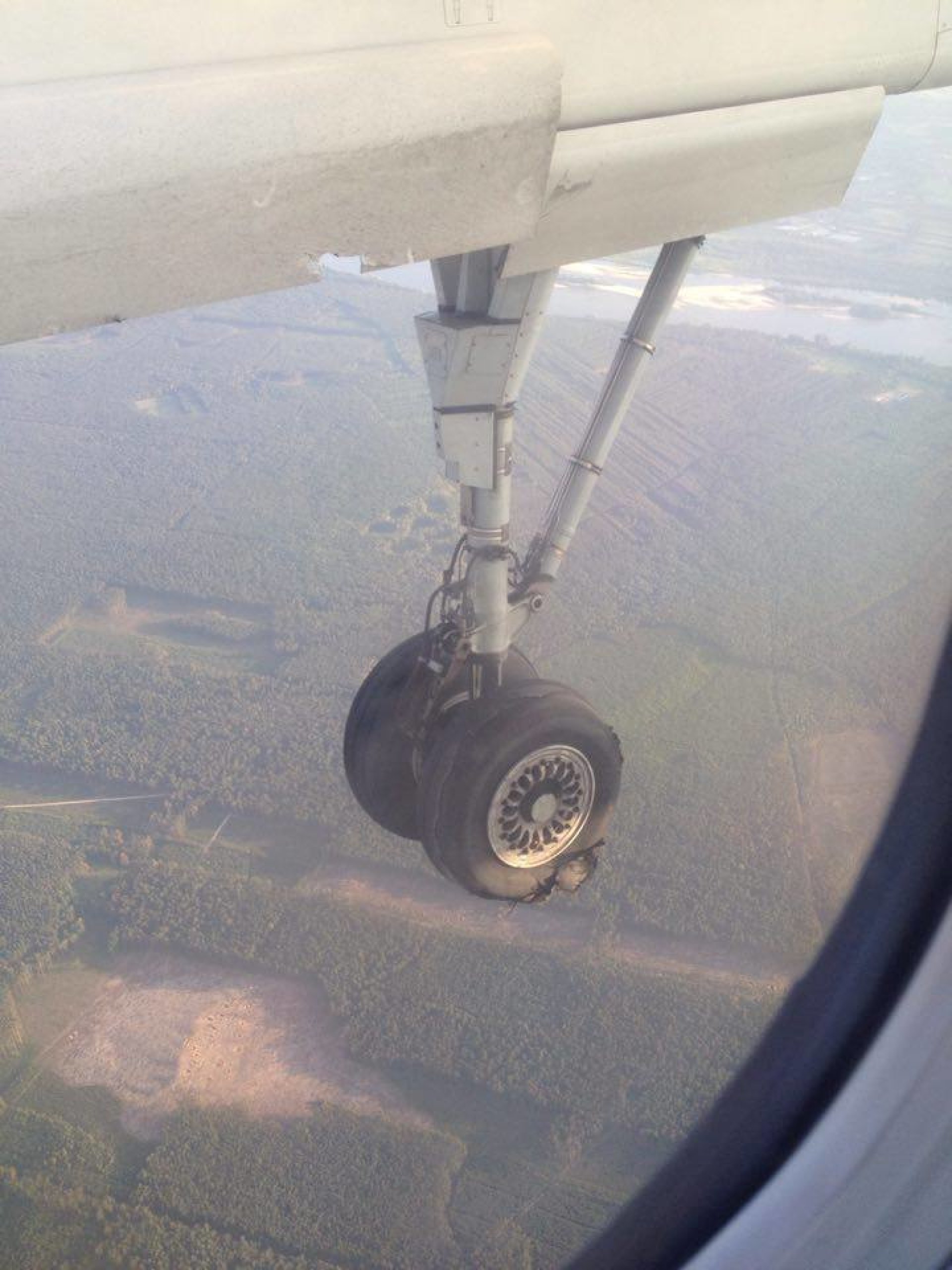 To evaluate if an aircraft is safe to fly we use three main reference documents:

This document contains the list of elements that are allowed to be inoperative.

For example a pneumatic valve, a computer, a seat, etc...

All unserviceable elements will have to be fixed within a predetermined duration/limit. (Usually 1, 3, 10 or 120 days)

If the failure is not fixed by the due date, the whole aircraft will not be released to fly. (No matter how small the fault is)

This document contains the list of components that may be removed from the aircraft.

For example a damaged refueling service door can be removed, if the maintenance team is unable to fix it before departure.

These will usually be associated with performance penalties.

CDL defects will also come with a deadline.

This manual contains all information needed to evaluate structural damage such as dents, scratch, lightning strike.

This manual will also give you the information needed to evaluate if a damage is "no-go" (meaning the aircraft is not safe for flight) or if the damage is within tolerance.

The plane will not be allowed to fly with a blown tyre. A blown/damaged/worn out tyre is a no-go.

However, airliners are designed to land safely with one blown tyre. Aircraft incorporate lots of redundancy so as to eliminate single points of failure — for example, most commercial jetliners are designed to be able to land safely even if they lose an engine. Efficiency, comfort, and ease of operation may be reduced but the situation can be kept under control and is still within the aircraft's design specifications.

The aircraft should also receive extensive inspection before departure and after landing.

The other answer goes over the MEL/CDL/SRM, but I'll address your specific questions:

Is it okay to fly with that?

(I assume you are talking about the gear door, not the tire) That depends, specifically in this instance I doubt that there would be any issue flying with that small amount of damage considering it is on a gear door on the bottom of the engine pod. I would, as a pilot though, want my maintenance people to look over it for damage you can't see on this side, perhaps rubber flew up into the gear bay and broke/dented a hydraulic line, etc. If it really is as superficial as it looks, it would probably be OK.

I guess it isn't important for the safety of flight (it looks like some landing gear cover or something), but what damage of airplane is considered safe for flight?

Gear doors can tear off and rip through other parts of the fuselage, like the tail, so they can be safety critical if damaged enough. As far as what damage is considered safe for flight it really depends on the damage and its location. Some damage that cannot be seen like JAL Flight 123 which had a damaged aft pressure bulkhead from a hard landing 7 years prior. Hard landings may not have any outward appearance but hide dangerous internal damage.

The only way to find out if its safe to fly is to have it inspected. Only then can it be determined if the damage would render the flight unsafe. I don't know of any pilot that would look out the window, see damage, and determine it was safe to continue. Typically after noticing damage the next thing you do is look for a place to put it down and inspect it.

Is it possible to force the airline to repair non-critical parts?

I'm not sure who you are talking about doing the forcing? If it is you as a passenger, you could simply bring it to the attention of the crew and if you don't have a satisfactory answer, re-book your flight. You could even tell other passengers you don't feel safe due to XXX. Considering how many times I've been delayed because there was an issue with the pilots seat sliders on an ERJ, I'm guessing most times the crew knows about it and maintenance is on its way. However if you notice something, speak up, it may save some lives. Just be discreet (don't scream and yell because you see dirty rivets), crews are pretty good about wanting to make it there alive and will take any concerns seriously.

If you are talking about the airline doing the repair versus the manufacturer, this happens pretty often. Most airlines have maintenance crews for that reason.

47
Why aren't flights continued after losing a tire on rotation?
22
What sort of issues related to extreme heat (115°F, 46°C plus) would prevent takeoffs or landings?
18
Can an empty 747-400 with minimal fuel take off on two engines?

23
What are the accident rates for kit built aircraft vs. normal aircraft of the same model?
5
What is the minimum power system required to fly a commercial aircraft?
27
What emergency situation can pilots encounter in gliders/non-powered aircraft?
4
What could these possibly incorrectly translated numbers for aircraft speed have been?
3
Before a flight, what are the most important things to check in an aircraft (walkaround)?
10
What are good resources on causes of private aircraft crashes?
4
What first aid equipment is on a commercial aircraft?
0
What aircraft model is this that crashed?