What are the effects of headwind on ground speed and take off run? [closed]

I'm just making sure I got this right.

For the take-off roll, having headwind is preferable, so there is a positive airspeed.

For the en-route segment, a headwind is not ideal and increases time to destination, whereas a tailwind is more favorable.

Short Answer: Yes, you have it right.

For a longer answer consider an example aircraft that has the following characteristics:

Note that all the speeds are airspeeds, which are what we usually measure in flight.
To find the groundspeed you add or subtract the effect of wind, which will become important as you'll see:

A headwind gives the plane a lower groundspeed for a given airspeed.

If our example airplane has a 10-knot headwind it has the following practical effects:

A tailwind gives the plane a higher groundspeed for a given airspeed.

If we reverse our earlier example and give the aircraft a 10-knot tailwind it has the following effects:

A chart of the effects of headwinds and tailwinds on takeoff and landing can be found in the Pilot's Handbook of Aeronautical Knowledge, it's reproduced below. 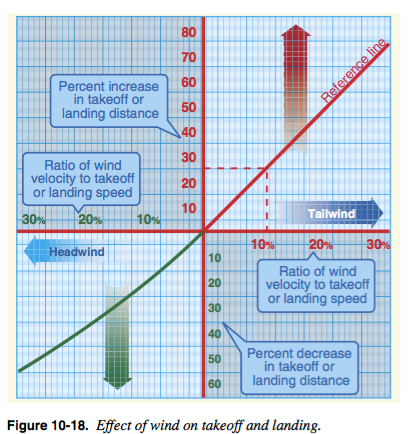 Not the answer you're looking for? Browse other questions tagged landing takeoff wind cruise or ask your own question.

2
What is the difference between ground speed and airspeed?

31
What is the proper procedure after a bird strike in a single engine plane during takeoff?
8
What are the meanings of various reference lines and sections in a take-off distance graph?
3
How do head- and tailwinds affect airspeed?
6
Under which conditions is full rated power instead of METO power required for takeoff (DC-3/C-47 with Pratt&Whitney 1830 twin wasp engines)?
2
What are the effects of headwind strength on landing?
5
What qualifies as a “takeoff” and “landing” in currency requirements?
13
In light aircraft, non-instrument flight, apply (nearly) full aft elevator before beginning the takeoff roll or at some predetermined speed?
6
What are the pros and cons of practising figure-eight landings on perpendicular runways?
2
Which direction of a forward slip is safer during a turn to final?
3
Does the Enroute Phase begin at a 30NM distance from the departure airport?