What is the relation between the boundary layer and lift of an aerofoil?

I wouldn't say that the boundary layer is responsible for creating lift, even if the real world friction enables the creation of circulation and therefore lift. It is mainly responsible for the drag.

However, you do need a boundary layer to explain drag. The no-slip condition on the airfoil surface creates a layer with a high velocity gradient (from zero on the surface to $V_\infty$- the freestream velocity). Its thickness depends mainly on the viscosity the fluid around the airfoil:

I think the better way of putting it would "viscosity" is essential for lift rather than boundary layer is essential. If it were not for viscosity, the fluid wouldn't want to follow a curvature, leading to acceleration and decelerate and consequently decrease or increase the pressure. The pressure difference creates a net force in different directions. The force normal to free stream direction is lift (or could be negative lift depending on direction). The one parallel to the free stream is thrust or pressure drag (depending on direction). The layer of fluid closest to the surface sticks to the surface and an average momentum exchange with molecules above it leads to deceleration of flow and consequently the growth of the boundary layer. The boundary layer is essentially our concept of how far this effect is significant above the surface. And this is what causes skin friction drag. From point of view of the surface moving through the stationary fluid medium, the fluid molecules are trying to stop it from moving through the fluid and that force is the skin friction drag.

Also regarding the relation between lift and boundary layer, the boundary layer alters the apparent shape of the aerofoil surface, which can change the expected lift production.

You're right--the boundary layer is related to lift production since, in a subsonic example, "guides" the air relative to the airfoil shape and enables the necessary flow accelerations that create the pressure differential and downwash. However, a thick boundary layer is not necessarily a good deal, especially on an airplane wing.

I think that this answer makes a good reference here. The thicker than a boundary layer is, the greater the velocity and pressure gradient across it. Therefore, the chance of flow separation (think of stall, when flow is no longer following the airfoil contour and is creating a ton of drag and not much lift) is also higher.

The boundary layer is related to lift production, but indirectly. The incoming flow not only sees the shape of the airfoil but also the slow-moving air adjacent to the geometry. This effect is captured by the displacement thickness, as illustrated in the image below: 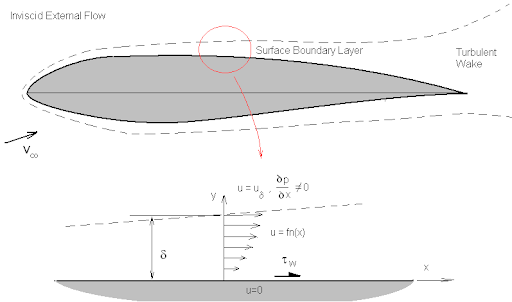 The formula of the displacement thickness is given by:

This is the equivalent thickness that when added to the airfoil captures the effect of the boundary layer on the external flow.

As you can see, the airfoil + boundary layer is thicker, and also has lost part of the curvature that is present in the airfoil. The airflow leaving at the right of the image will not be pointed downwards as would be the case without a boundary layer. The amount of downward turning that is experienced by the airflow is directly proportional to the amount of lift being generated.

It is not the boundary layer per se that creates lift. It is the circulation around the airfoil. For that to get started, a starting vortex that is left behind on the runway, has to be produced. And that is created through boundary layer separation near the trailing edge of the wing.

Without boundary layers we would have a circulation-free flow around the airfoil with very high flowspeed where the flow rounds the trailing edge to a stagnation point near the trailing edge on the upside of the wing. With an absolutely sharp trailing edge, flowspeed would go towards infinity, and we would need exactly zero viscosity to avoid the production of a boundarly layer that would separate to create a starting vortex.

5
Will air accelerate over a wing and generate lift, if the air has zero viscosity?
44
Why does supersonic flight detach airflow from a wing?