I want to compare two types of engines: Turboprops and piston engines. I want to know which one is more efficient. There are many types of efficiencies, so I will specify: thrust (in newtons) per fuel consumption (kg/second).

Right now I don't care about power/weight ratio or max speed or horsepower. Those are all valid concerns for aircraft design, but I'm trying to pick exactly one criteria and figure which engine is more efficient in its terms and its terms alone. I don't want to mix criteria. I want to focus on one aspect, get an answer to it, then move on to the others later.

A complication is that piston engines usually give their output in horsepower. I have no idea why this is. What's ultimately needed is thrust. I realize that a propeller engine's job is to create torque, and thrust will depend on blade length and airspeed. In that case, I can't understand why those engines don't specify their output in torque.

Citing engines that actually exist (and citing their specs) will answer this question as long as the choices are modern, good engines.

(I did not include turbojets or turbofans for fear of being too broad. I picked two propeller engines and don't want to mix them with jet engines.)

One more thing. I realize that engines are capable of varying levels of thrust. It's my understanding that max thrust is usually more inefficient than cruising thrust. Therefore, I will ask for thrust/fuel-consumption figures of an engine at typical cruise conditions.

No, piston engines are more efficient.

Their output is given in kilowatts or HP because this does not change much with speed, unlike the thrust of a propeller. By running a piston engine a few times on a dynamometer stand you can get reasonable numbers which are valid over the full operating range. If you want to characterize them by their thrust, you would need to look at an engine-propeller combination at one particular speed, which is not very helpful.

Now you ask for specs of contemporary engines. The funny thing is that the efficiency of aviation piston engines has not changed much over the last decades. If you assume 250 g of fuel per kWh at full power for gasoline engines, this figure holds already for good WW II-era engines like the Jumo 213 A which was run on 87 octane gasoline. The low octane number restricted compression to 6.93:1, while the higher octane number of contemporary AVGAS allows for an 8.5:1 compression ratio in engines like the Lycoming O-360, which consumes 280 g of fuel per kWh. Adding fuel injection enabled Lycoming to reduce fuel burn to 240 g per kWh in the IO-390, which was first run in 2002.

Diesel engines are even more efficient; they typically consume 220 g per kWh. This low value was already possible with the venerable Jumo 205 of the 1930s which consumed only 213 g per kWh at its most efficient speed. Modern aerodiesels run at similar efficiency: The Thielert range of engines which have been taken over by Continental consume 220 g per kWh.

Even the best turboprops rarely achieve less than 300 g per kWh. The most modern version of the venerable Pratt&Whitney PT6 consumes 308 g per kWh, and only very recent developments can close the gap to piston engines. The Progress D27 claims a specific fuel consumption of 231 g per kWh while the Europrop TP400 one of 237 g per kWh. Note that here the remaining thrust from the exhaust has been converted into an equivalent power rating to achieve such good values.

There is no small turbine engine that has anywhere near the specific fuel consumption (Lbs/Hp?Hr or Grams/Kw/Hr) of a gasoline or diesel aircraft engine. Turbines are light (lbs/Hp or KG/Kw) but burn considerably more fuel. Turbines are also extremely smooth, almost no vibration. But as to efficiency, even our antique technology small aviation piston engines, turbines just aren't very good.

Typically the smaller the turbine the worse the specific fuel consumption. So the Allison, now Rolls, C250 family, are terrible, sometimes getting 0.8 Lbs/Hp/Hr in low cruise setting. The big turbines, like the AE2100, can get down to 0.4, but these engines are rated at 5,000hp, much too big for light aircraft.

One particularly troublesome aspect of turbine specific fuel consumption is that it is worse at lower power settings. This is one of the reasons that most turbine aircraft tend to fly as high as possible, because at high altitude they are running much closer to max power to achieve best aerodynamic efficiency. Piston engines tend to achieve their best specific fuel consumption at relatively low power settings, so flying low and slow does not hurt range nearly as much as on a turbine aircraft.

With several new diesel aircraft engines coming into use the efficiency of piston aircraft engines has gotten much better. Some of these diesels have specific fuel consumption in the 0.35 lb/Hp/Hr range, better than even the most efficient large aircraft turbines, and close to half of a small turboprop at low cruise. 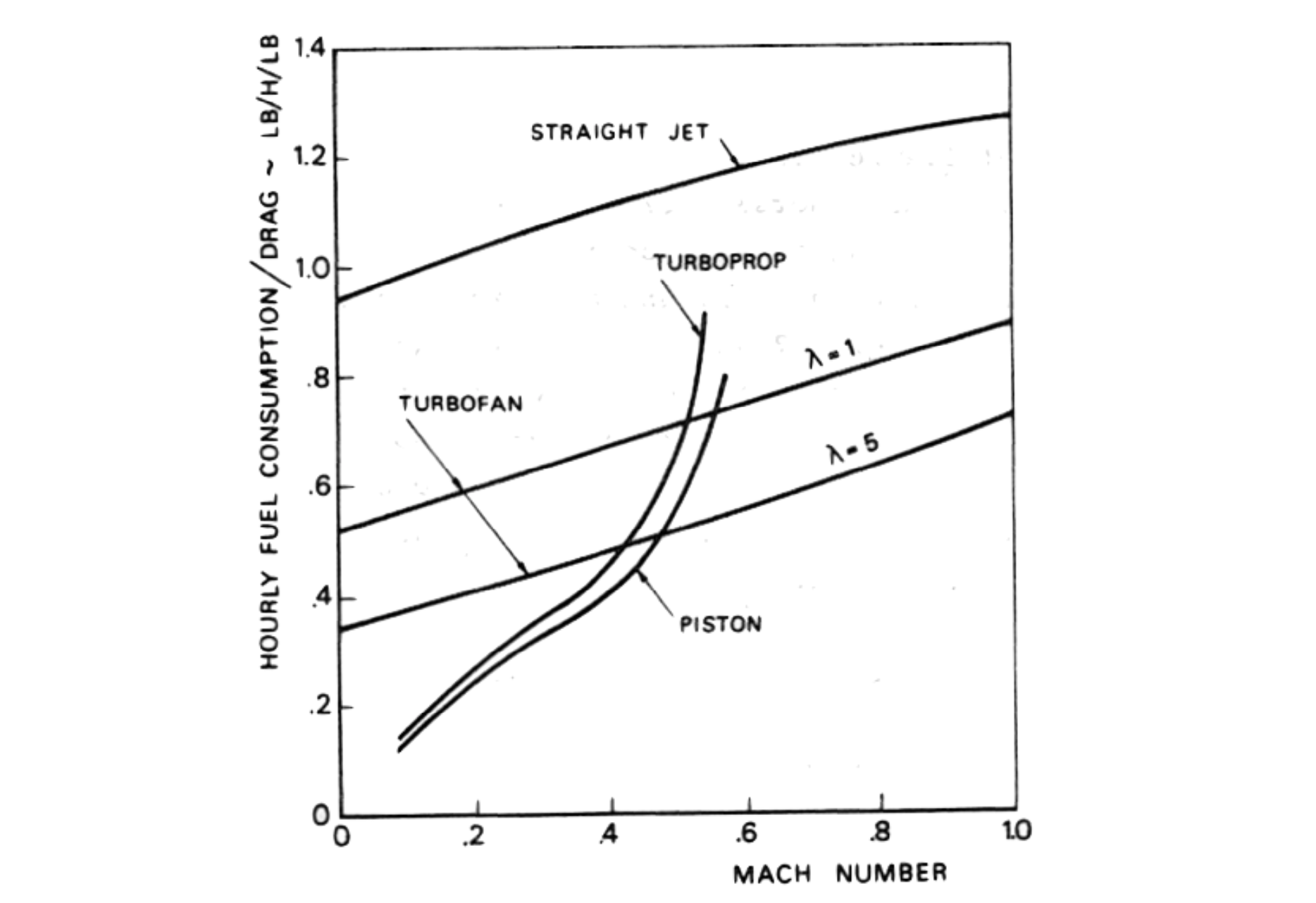 Above graph is from Torenbeek, Synthesis of Subsonic Airplane Design:

Fig. 4-1 shows the quantity of fuel used per hour by some representative examples in the categories mentioned above, the figures being for cruising flight at a given thrust which is equal to the drag.

The graph shows that turboprop engines have a slightly higher fuel consumption than piston engines, which at the time of publishing of the book were exclusively avgas engines. The graph shows the state-of-the-art of 40 years ago.

Turbines aren't as efficient as piston mills, but the difference isn't as much as you might think if you consider the improved performance. At optimum altitude, the Meridian [turboprop] burns about 31 gph compared to 20 gph on the Mirage [piston], roughly 50% more. That's because piston engines are more efficient and offer a lower specific fuel consumption (.43 lbs./hp/hr) compared to turbines (.58 lbs./shp/hr).

So for the fuel consumption criteria, a piston engine is more efficient. But a turboprop can fly faster, i.e., get there on less fuel.

If you want to rate an engine by the thrust it makes, you must know the propeller efficiency at the given criteria for your test. The engine performance and thrust performance both change with altitude and speed. Only a jet engine or turbofan engine should be rated by thrust, and even then, it changes with altitude and speed. Don't accept book numbers for prop efficiency, because it changes all over the map.

I went and broke down how much fuel is burned to create one hp in the lycoming 720 vs the pt6 and the piston engine came out to be between 7-8 percent more efficient than the turboprop.

Not the answer you're looking for? Browse other questions tagged engine efficiency or ask your own question.

38
Why increase the number of cylinders in an engine instead of increasing their volume?
6
Why aren’t diesel piston engines used on aircraft like the Saab 340 or L-410?
6
Why are the top speeds for jet engines higher than for propellers?
11
How does the range of a single- and twin-engine for small aircraft compare?
7
Why is my calculated seat-miles per gallon of small aircraft higher than of big aircraft?
1
How to calculate the thrust of a piston or turboprop engine?

4
Are the Boeing 747-8 engines more efficient than the 747-400 engines?
1
How do turbofans and piston-engines compare in terms of maintenance costs?
17
Why is max endurance different for jet and props?
1
Propeller Curve Modification on Test Rig
19
How does increasing the size of a jet engine make it more fuel efficient?
18
Why would a B-29 consume more fuel at 17 kft than at 9 kft?
16
Can the plane Celera 500L be eight times more fuel efficient than a jet of similar size and capacity?
16
Why is thrust inverse to speed in piston engines?