What are the landing stall speeds of a Cessna 172?

I understood from Why is stall speed listed in a POH? that the Cessna Skyhawk POH lists stall speeds for specific conditions due to a lack of AoA indicator. However, what's unclear to me is what the stall speeds actually are.

In page ii of the Cessna 172 POH it lists 48 KCAS for the Flaps Down, Power Off-configuration:

Then on page 2-5 it lists the white arc spanning 40 - 85 KIAS, with Lower limit is maximum weight Vs0 in landing configuration.: 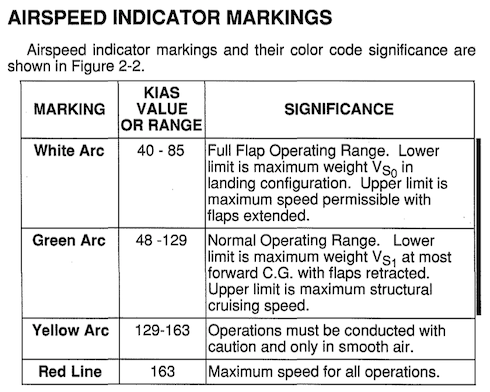 According the V Speeds Wikipedia page Vs0 is Stall speed or minimum flight speed in landing configuration. I understand that KCAS is not the same as KIAS, but this is quite a significant difference.

Question: what is the actual stall speed for a Cessna 172 while in landing condition and what do these two data points in the POH mean?

At low speed, near the stall, 40 KIAS (the low end of the white arc) and 48 KCAS (Vs0 in the POH) refer to the same actual speed. While there is a limited divergence (0 to 2%) between CAS and IAS at medium and high speed, this difference can be as much as 20% at low speed, when the aircraft pitch is large.

In your question, you mention:

The end of the white arc is also Vs0. That's a bit confusing indeed as two types of measures are used, but in fact they refer in practical to the same actual airspeed.

Unless computations are done, airspeed values displayed to the pilot IAS (indicated airspeed). 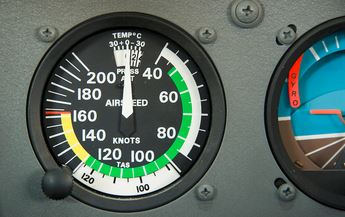 All V-speeds are defined in term of "calibrated" airspeed (CAS). The aircraft manufacturer provides tables to find the CAS from the IAS read on the airspeed indicator. These tables defined for different drag devices status (e.g. flaps values) are valid at sea level and 15°C. They are included in the POH. I found this C172N one online:

As you realized, the difference between KCAS and KIAS becomes larger as the air speed decreases, because the angle of attack and the errors in pressure measurement increase.

TAS depends on parameters and need to be computed. However it can be approximated by the indicated airspeed. IAS is close to the TAS in favorable atmospheric conditions (sea level air density), and at low angles of attack.

The IAS is easy to display to the pilot using the an aneroid cell. For higher angles of attack, the calibrated airspeed (CAS) corrects for instrument and probe placement errors. CAS can be obtained using manufacturer tables. CAS, as IAS, is valid at sea level and 15°C.

When the air temperature or pressure are not close to the ideal ones (15° and 1013 hPa), then CAS differs from TAS.

The ASI usually has a window (see above) for reading the TAS after the outside temperature and altitude pressure have been selected.

(At speed higher than 200 KCAS or altitude higher than 10,000 ft, the compressibility of air becomes significant, and the equivalent airspeed (EAS) is better suited to describe the aerodynamic effects.)

Vs0 is determined assuming the maximum landing weight and the most unfavorable CG location. It is expressed in KCAS. If the Vs0 CAS were unknown, the pilot wouldn't be able to correct it to include the effect of weight and balance changes.

The ASI, because no correction is done, can display only IAS. So the IAS value for the lower speed of the white arc (Vs0) is in KIAS.

The answer for the POH you provided is on this page.

The page you are referencing is a revision made by someone who decided to use CAS for some reason.

Your stall speeds at max gross with max forward C.G. are:

The design stall speed for a Cessna 172 at maximum weight with flaps fully extended is 40 knots indicated air speed.

Not the answer you're looking for? Browse other questions tagged cessna-172 v-speeds poh or ask your own question.

8
Why is stall speed listed in a POH?
7
Would biplanes be of use in VSTOL applications? What is the down side to biplanes? ex. Bush Pilots or VSTOL competitions