In the June 16, 2016 Washington Post news article A rare, risky mission is underway to rescue sick scientists from the South Pole difficulties of flying in and out of the south pole in winter are discussed. The article describes an earlier emergency evacuation in April of 2001:

The replacement doctor for the station disembarked, and the ailing Shemenski clambered onto the plane. But as they started up the engines, the crew realized they couldn't take off. The Twin Otter's skis had stuck to the ice beneath them, and the grease on the wing flaps had frozen them in the fully extended position. While the station workers hacked at the ice on the skis, the plane's mechanic jerry-rigged the controls to allow it to take off. It was one of the longest, slowest take-offs any of them had ever attempted, but eventually, they were in the air.

How did the jerry-rigging of the controls of the De Havilland Twin_Otter allow it to take off from the south pole in winter with its flaps fully extended because of the frozen wing flap grease?

Is there a better description of the problem and the actual solution that was implemented?

note 1: According to the article, the current rescue mission can be monitored at https://flightaware.com/live/flight/CGKBO
update: apparently this hasn't actually been the case.

note 2: The article also says there are actually two planes involved in the rescue mission.

Two small bush planes are flying to the South Pole this week to evacuate workers at the Amundsen-Scott research station — a feat rarely attempted during the middle of the Antarctic winter.

Flying with the flaps extended is perfectly possible, just inefficient. At that point they were probably just trying to get in the air, not worrying about their fuel efficiency or airborne speed. Otters normally land and take off with flaps somewhat extended. The main problem is that with flaps fully extended, acceleration will be low, so it will be a long, slow takeoff. One issue is that if the plane has any icing, being in a full-flap condition can lead to a stall.

Once things get down to -50F or below, stuff really starts to freeze. For conditions like that you need to start replacing grease with graphite lubricants. Even fuel freezes so the planes have to use special heaters.

Here is a more technical description of the event by an electrician:

We then refilled the smudge pots and brought out tanks containing about 1,000 gallons of fuel to refuel the plane. They also brought out 3 Herman-nelsons, portable diesel heaters used to warm up planes and other big equipment. At about 2:15AM, the plane was started but some of the hydraulics in the tail controlling the flaps were frozen. We called to get the Herman-nelsons back to heat up the flaps. They ran their engines the whole time, and we had to bring out another 100 or 200 gallons of fuel.

Finally, at about 5:00 AM, the plane was working right and was ready to go. But then it appeared the plane was stuck in the snow. So a couple of guys stood on a car-like vehicle with tank treads, and shook the plane's wing. This caused the whole plane to rock back and forth. But finally the plane broke free and taxied to the skyway. The plane turned around and took off and flew in the -64F air.

There are no hydraulics in the tail, obviously, so the electrician is confused about something. The hydraulic system in an ski-equipped Otter is used for the flaperons (in the wing) and for the ski controls. 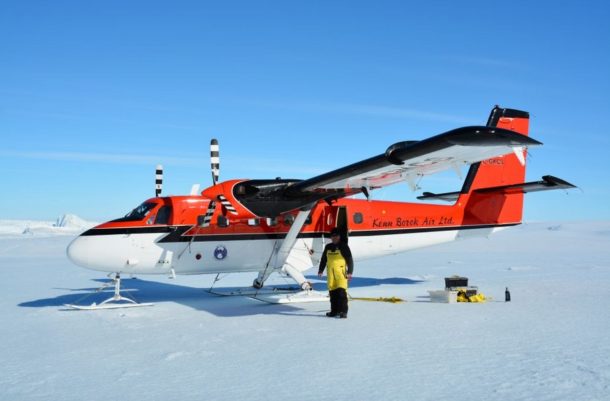 Not the answer you're looking for? Browse other questions tagged emergency icing cold-weather or ask your own question.

2
Where can the highest air density be found on Earth?

80
How miraculous was the miracle on the Hudson?
3
How to relay an emergency to ATC while on the ground?
14
How is the emergency locator transmitter of the A320 fixed, activated and carried away?
15
How long after the last departure shall the airport stay open for an emergency return?
1
How close to the envelope and the ideal was US1549 on ditching in the Hudson?