How does an aircraft move on the ground? [duplicate]

Does an aircraft such as Airbus or Boeing have motors similar to cars, so that they turn the wheels? or do they move on the ground with their engines, the same way they fly?

For movement on the ground the aircraft uses it own engines, however since the aircraft cannot move backwards on its own, there are pushback trucks on the airport 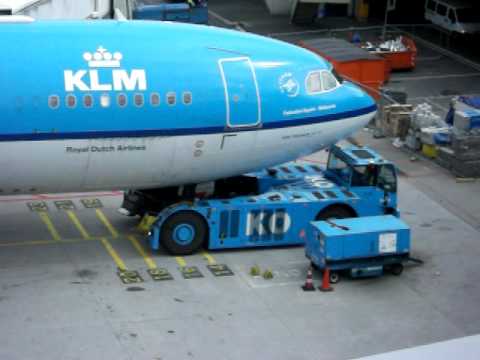 A pushback truck lifts the front weel of the aircraft, their role in most airports is to move the aircraft away from the parking spot on to the taxiways. Here the truck is removed and when all platform staff is out of the way the engines are started one by one. From here on the aircraft moves on its own power to the runway. In the aircraft you will hear the engine spinning up when power is demanded for acceleration.

Not the answer you're looking for? Browse other questions tagged ground-operations or ask your own question.

16
How does an aircraft taxi?
0
How do plane landing-gear tyres roll before take off?
1
How do aircraft steer on ground?

32
Can large airliners be operated without ground support?
25
How are airliners secured on the ground during hurricanes?
14
Do airliners have horns for use on the ground?
12
Why must some aircraft get permission to start their engines?
3
How do typical ground marshaling signals differ for helicopters?
8
How does the 3 pin ground power connector (AN2551) work?
7
How do airlines bring spare parts to aircraft stranded outside their main facilities?
4
How does ATC direct aircraft on ground from the parking to the runway?
19
Can a completely drained battery be recharged via ground power on an airliner like the B737?