The flight dispatcher is known as the ground pilot. 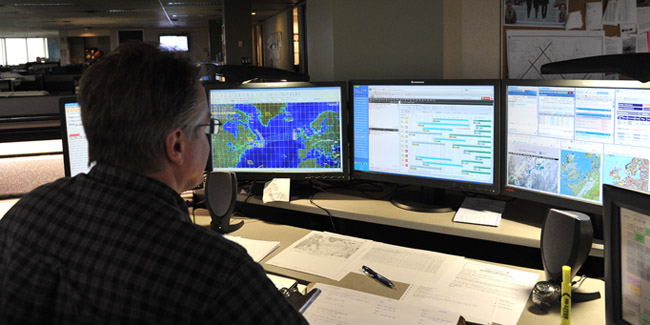 It's not clear to me what is their role related to a given flight, or where are they working from, how the interactions occur between the flight dispatcher and the flight crew, or the maintenance team.

Have you ever been waiting for your flight at an airport and noticed that big roll of paper being printed up at the counter? That is called the "Flight Release". That roll of paper has all the information that the pilots need to fly their flight. It has their fuel, their route, the weather information, probable payload, and everything else they need. A Flight Dispatcher put that together for them.

The pilot looks it over and calls the Dispatcher if there are any questions. The aircraft cannot push back until both the Captain and the Dispatcher agree that it is safe to do so.

Once the flight is airborne the Flight dispatcher keeps an eye on that flight and makes any recommendations to the Captain regarding any change in route, altitude, speed, destination or anything else relating to flight safety and the efficient operation of the flight. This is called "flight following". If ATC gives the Captain a route change, the Dispatcher will calculate the new fuel burn. If the flight has to hold, the dispatcher will calculate how long the flight can hold before it has to land somewhere.

The Captain and Dispatcher communicate with each other while the aircraft is in flight primarily by ACARS. Think of it as an instant messaging system between the Flight Deck and the Dispatcher's computer. They type messages back and forth to each other and each sees the message on a screen.

The Flight Dispatcher is also there to help if there is a problem with the flight, i.e., a sick passenger, a mechanical issue, a change in the weather, or any other problem that the Captain may be facing.

The Captain and Dispatcher have joint authority to initiate, delay, continue, deviate, or cancel a flight. Nothing can happen until they both agree on a plan of action. Because of this the FAA considers the dispatcher to be a "crew member" and the Dispatcher's base of knowledge is very close to that of the pilots. Because of this, Dispatchers are allowed to ride up in the Flight Deck if they want to and are required to do it at least five hours a year.

No, the Dispather is not an Air Traffic Controller. However, the Dispatcher's plan for the route is given to ATC. ATC then takes all the flight plans filed by all the Flight Dispatchers who work for the airlines and put them all together for the big picture and then make it happen.

In short, the Flight Dispatcher works for an airline to plan flights and give that information to both the flight crew and air traffic control, monitor the flights while they are airborne, and work with the Captain to solve any problems that may arise. Their main concerns are, in order, flight safety and flight efficiency.

So in a sense they are the bridge between the technical and business side: instructing the technical people on what to do to keep the operation cost-effective.

On the image, the left screen is a map, most likely showing where each aircraft is, the middle looks like scheduling tool with timeline for each aircraft and pilot and the right is probably some flight planning software.

Update: @mins found this video about the flight planning process. And it is a lot of work. When flying multiple short legs, there is no way pilots could do it themselves when with smaller aircraft they may only have around 40 minutes turn-around time.

Not the answer you're looking for? Browse other questions tagged airline-operations commercial-operations dispatch or ask your own question.

4
Do airliners get substantially different weather briefings from the rest of us?

20
What work besides flying planes does an airline pilot regularly do?
36
How are duplicate call signs dealt with?
13
How much time is a commercial aircraft (e.g. A320 / B737NG families) flown manually?
5
Why do airlines require passengers to return to their allocated seats for landing?
1
What is the reapplication process for a suspended dispatcher certificate?
7
How are crews managed after a diversion (far from hub)?
1
Variable versus fixed costs in the airline industry