Have B-25's and B-26's been converted for private business use?

In the movie Cash McCall, the main character, McCall, owns an aircraft that looks remarkably similar to a B-25 or B-26, but is painted yellow and has no turrets.

Have these aircraft been converted for private business use or were there business aircraft based on the design of WWII bombers?

McCall's plane is a demilitarized Douglas A-26 Invader, a type used in WWII.

Since the film was made in 1960, I imagine there were plenty of them around.

Yes. After World War 2, surplus aircraft were cheap, plentiful, and offered great performance compared to pre-war designs, and many were converted to use as executive transports.

The A-26/B-26 was no exception, being the basis for the On Mark Marksman series. Some of the On Mark conversions involved pretty serious modifications like a new wing spar carrythrough and a new (and much uglier) cockpit.

The B-25, to my knowledge, had no comparable program carried out, but many became water bombers for use in fighting forest fires. There were undoubtedly some executive conversions made as well!

Other types like the Lockheed Hudson/Ventura/Lodestar transports and patrol aircraft were also popular conversion choices.

The aircraft is a modified Douglas A-26 Invader. As mentioned in an earlier reply there were several companies which undertook such work. Most well known was On-Mark Engineering of Van Nuys, CA. The 26 in question, N36B was one of several (at least two used the same reg.) owned by citrus tycoon Willis (Bill) Bailard of Santa Barbara, CA. He had at least three of them over the years. Possibly four. Including an unpressurized On-Mark Marketeer. This example does not have the ring- spar mod as later versions did, and I suspect that it is an earlier Grand Central exec. version. Note also in the movie that the 26 still has the fittings for the upper turret installed.

Here is a list of surviving B-25 which may provide some references. It looks like Redbull has one that they fly around (arguably for business reasons) 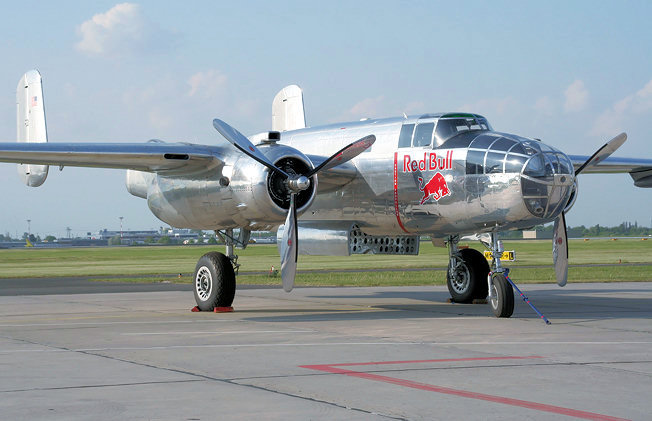 I remember Air Spray Ltd., at Red Deer, Alberta, had a highly modified A26 bought from the Mexican government that used to fly around call girls as the interior of the plane had a fully plush white shag carpet everywhere and you could fully stretch out with your hostess. It also had curtained windows in the back area and a bed type platform in the sealed bomb-bay area. It also had an extra long nose cone with a small kneeling shower stall that had heated water pumped from a water tank in the nose section. Just enough for rinsing off. The A26 outside color was white with a nose to tail medium blue stripe half way up and Mexican registration.

The question leaves it unclear as to whether the "B-26" reference was meant to apply to the Martin B-26 Marauder, or the Douglas A-26 Invader, later renamed B--26 after the retirement of the Marauder. Both were converted for use as executive transports (see https://en.m.wikipedia.org/wiki/Martin_B-26_Marauder , and https://en.m.wikipedia.org/wiki/On_Mark_Marksman ), as was the B-25 (see http://www.joebaugher.com/usaf_bombers/b25_31.html ).

So, regardless of details, the answer to the title question is "yes".

Not the answer you're looking for? Browse other questions tagged bomber aircraft-identification or ask your own question.

11
What are some disadvantages that come with a design like a B-2 spirit bomber?
7
What are the differences in design considerations for ground attack and air dominance aircraft?
16
What is the story of this aircraft?
5
Do you know the exact model and use of this rotorcraft?
9
How effective was WWII bombers self defense anti-air armament?
21
What aircraft was used as Air Force One for the flight between Southampton and Shannon?
4
Identify canard, low-wing, single pusher-prop plane over Upstate NY
4
Is it likely that an aircraft could have been near 10° 08' north at local midnight August 26/27, 2003?