What are these autonomous, shape-shifting indoor neutral-density craft I read about?

This may be on the edge of off-topic. I am trying to read more about a technology where generally autonomous (though could be sent commands), neutral-buoyancy craft were navigating indoors, in large spaces. The image I have in mind - vaguely - is of huge, transparent whales swimming around in the air in a giant atrium, never colliding with each other or the walls or floor or ceiling.

I'm trying to read more about how the sensing was done and the algorithms used, and how it was made to be so light weight, and what kind of propulsion they used that was also so light weight.

I seem to remember that they were possibly even changing shape in order to change direction.

But all I have is this image in mind from roughly 3 to 6 years ago, and so far I can't find search terms that give me anything even close. There were several articles and videos about this at the time.

The comment by @Andy suggesting they were Festo Air Rays almost nailed it.

They were Festo Air Penguins! 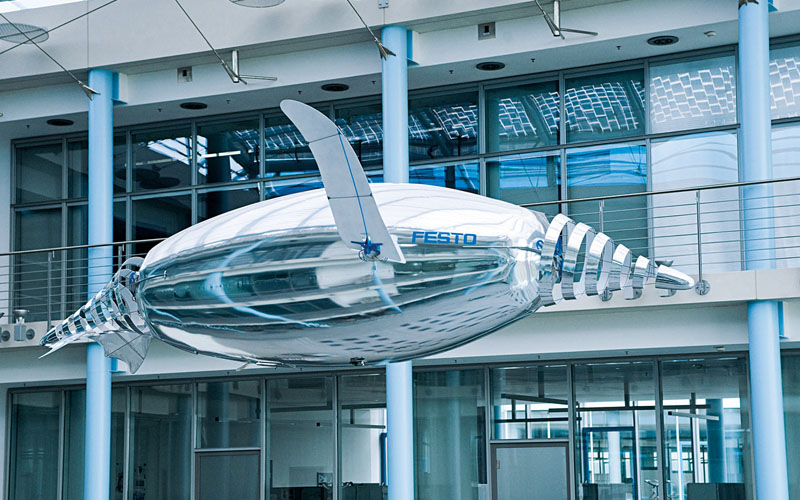 They can be seen maneuvering in these videos:

The article http://www.robaid.com/bionics/airpenguin-flying-robot-penguins-whats-next.htm describes the mechanism:

A strut to which the two wings are attached passes through the helium-filled balloon. This new type of wing design can produce either forward or reverse thrust. Each wing is controlled by two actuators: a flapping actuator for the up-and-down movement of the wings, and a further unit that displaces the wing strut to alter the pressure point of the wings. There is also a central rotational actuator for the two flapping wings that direct their thrust upwards or downwards, thus making the AirPenguins rise or descend.

The wing strut, which is supported at the pivot point of the torso, can be moved either towards the front or rear edge of the wing. Displacing the strut towards the front, for example, causes the wing’s pressure point to migrate forwards. The air-stream pressure bends the cross-section of the wing in such a way as to produce a profile that generates forward thrust. If the wing strut is moved towards the rear edge of the wing, the pressure point is likewise moved to the rear and the AirPenguin flies backwards. With this design a self-regulating, wing pressure-controlled, passively twisting adaptive wing has been realized for the first time.

The AirPenguins are also equipped with complex navigation and communication facilities that allow them to explore the space they float in on their own initiative, either autonomously or in accordance with fixed rules.

While they can be autonomous, and fly in formation, they can also maintain a "ground link."

By means of XBee, based on ZigBee, large volumes of data can be transmitted between the penguins and the transmitting stations by 2.4-GHz band radio. The penguins recognize each other on the basis of their distances to the transmitting stations. The rapid, precise control allows the AirPenguins to fly in a group without colliding, while also mastering height control and positional stability. As an alternative, they can act synchronously as a group. A comprehensive central surveillance system provides security in case of sensor failure. When AirPenguins are on low energy supply it prompts the penguins to return to the charging station.

The ongoing development of sensor and control technology is thus also being promoted along the road to decentralized, autonomously self-controlling and self-organizing systems thanks to the inspiration from nature.

While searching for information I found this even more advanced, articulated light (but not neutral buoyant) craft, the BoiniCopter, also http://www.robaid.com/bionics/festo-bionicopter-robot-dragonfly.htm which states a mass of 175 grams and wingspan of 70cm :

note: I have no affiliation with these sites or companies. This answer is a bit long I know, but the material is a bit unique. I felt that in this particular case the extra background may be helpful.

Not the answer you're looking for? Browse other questions tagged balloon ultralight or ask your own question.

6
Why does Google's Wing drone have dimples?

23
What kind of balloons are these?
10
Why do gliders have bungee cords in the control systems and what do they do? Are they on all control surfaces? What about ultralights?