How does GPS measure any plane's ground speed?

How does GPS measure an equipped airplane's ground speed assuming that the plane in question actually uses GPS as opposed to an inertial navigation system or other method?

(This was originally part of another question)

GPS is primarily made to determine the position of the receiver.
Therefore, GPS uses several satellites with exactly known positions which send very precisely timed signals. From the time difference between the signals when arriving at the receiver, the own position in space can be calculate, typically given in earths coordinate system.

Get the position two times, calculate distance, divide by time difference, and you have speed.

Another way is to measure the frequency of the signals from the satellites, since it slightly varies with speed due to the Doppler effect. This is similar to the shift in pitch of the horn of a police car passing you. This method gives you a speed value directly with your position.

As side note: GPS often is not that precise and gives your position with some offset. BUT the offset is mostly constant, so while the position is not correct, the distance traveled and so the speed is.

Exactly the same way that your car GPS measures your ground speed. 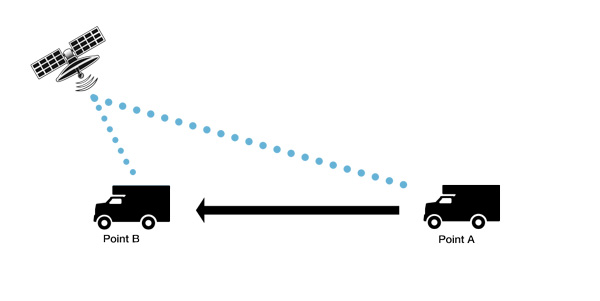 The receiver can evaluate the location at two successive times, and simply compute the velocity vector from differentiation. This gives a precision of several meters per second.

This velocity can be derived from the Doppler shift of the L1 carrier frequency. This true measure is far more accurate, up to centimeters per second, but is less simple to implement, as the frequency shift must be smoothed over a period of time.

Reference: How does a GNSS receiver estimate velocity?

Not the answer you're looking for? Browse other questions tagged aircraft-performance navigation gnss or ask your own question.

24
How did planes measure their speed relative to the ground before GPS?
16
How is the actual ground speed of an airliner measured?
13
What are the dimensions of the protected space provided by a holding pattern?

19
What is an Inertial Navigation System? How does it work?
10
How does an FMS shift after losing all external navaids?
24
How did planes measure their speed relative to the ground before GPS?
5
Is there any reason to have ADS-B out that is not based on GPS?
13
How is varying modulation depth achieved by localizer ground transmitters?
3
What are some of the longest flights without modern navigation systems?
6
Why RNAV SIDs and STARs are RNAV 1 instead of RNP 1?
0
What kind of airspeed does a (3D) GPS measure?