Why are Inline Engines more commonly used than Radial Engines?

Back in the early days of aviation radial engines were very popular, it seemed like all of the big planes of the 20s, 30s and early 40s used them. But some time during WWII (or so it seems to me) aircraft manufacturers switched from radial engines over to inline engines.

Why was there a switch? Why do modern manufacturers rarely, if ever, use radial engines?

Example of a Radial Engine for those who are unfamiliar: 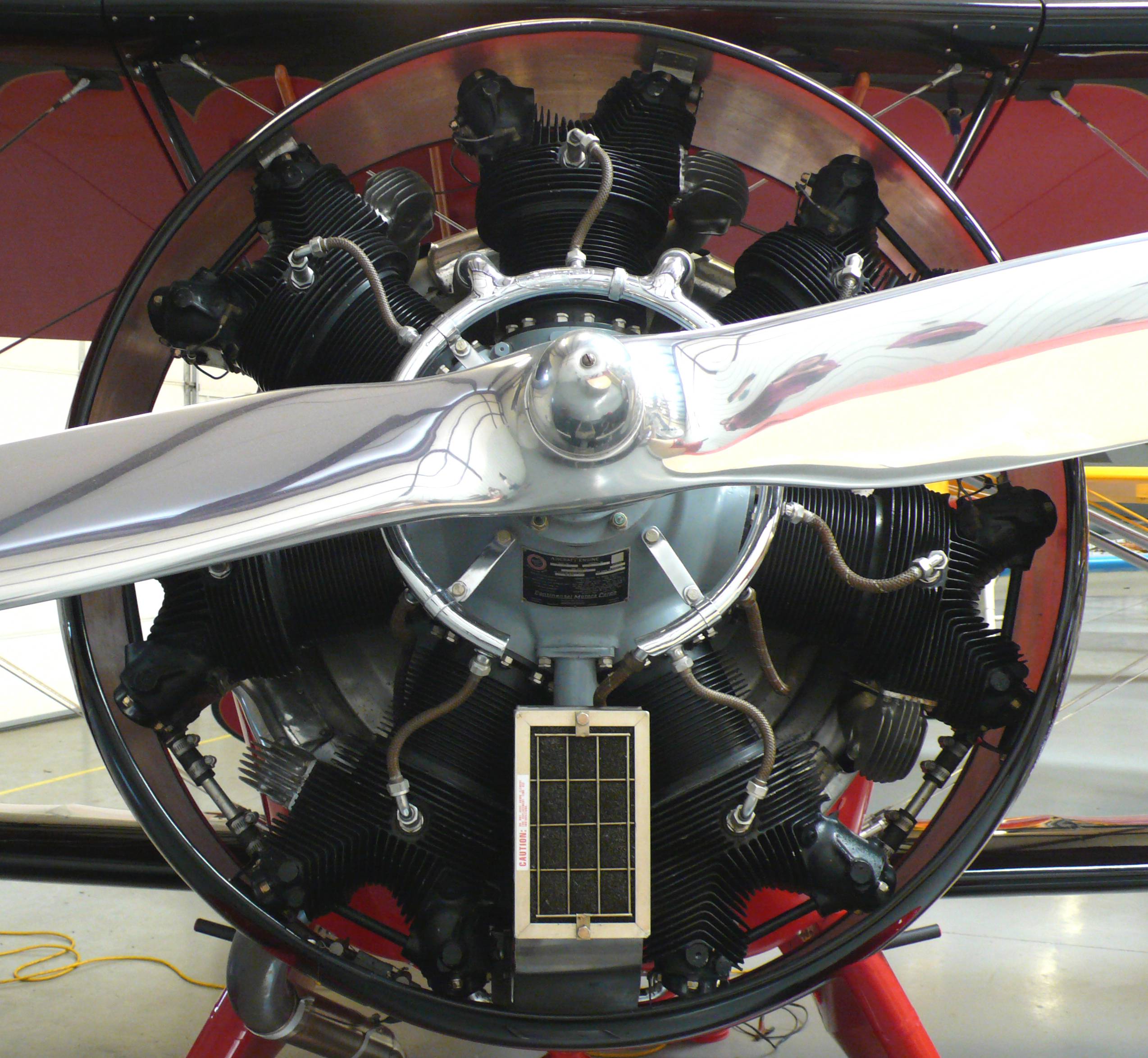 The big advantage of radials at the beginning was their large frontal area, which meant they could be air cooled. An inline air cooled engine can run pretty hot on the rear cylinder. The bigger the engine, the more of an issue cooling becomes. There are some huge air cooled radials, in sizes that would be unthinkable for an air cooled inline engine.

As technology advanced, more complex water cooled engines became more popular. However air cooling was still a big advantage in military planes, due to the absence of a delicate cooling system that could be damaged, enabling radials to persist in this arena. Of course these days no-one would dream of putting a piston engine in a fighter.

Nowadays liquid cooling is almost universal for piston engines in general applications, with small aircraft being one of the few areas where air cooling has managed to hold out to some extent (see below.) In the absence of a military application that prefers air cooling, the large frontal area has become the radial engine's downfall, due to the large aerodynamic drag it produces. The other problem is that the valve gear is quite complicated, which means overhead camshafts and multiple inlet/exhaust valves per cylinder are impractical. This makes efficiency vs power to weight ratio a big issue as follows:

For an engine to have good power to weight ratio it must run at high RPM. To run at high RPM it must breathe effectively. To do this with just two valves they have to open wide. To stop them colliding with the piston, the compression ratio must be low, which limits efficiency. Hence most modern engines have more than two valves per cylinder to get around this problem.

Excellent animation of the valve gear, which also tends to illustrate the difficulty of putting more than 2 valves on a cylinder. Also, lots of history (obviously.)

In World War II both Double Wasps (46L air cooled radial) and Merlins (27L water cooled V, licensed from Rolls Royce in Britain and built locally by Packard) were used by the American military. I once read a very good authentic World War II discussion about the tactics of when to use air cooled radial fighters and when to use water cooled ones. Unfortunately I can't find it. Here's one of the many discussions on the subject. Note that the Merlin had overhead camshafts and 4 valves per cylinder, like modern engines, whereas the Double Wasp obviously did not.

I am more of an engine guy than a plane guy, but I've just been looking at modern air cooled aviation engines. They are only available in much smaller sizes than typical WWII fighter engines. Typically they have 4-6 cylinders, too few for a radial, but enough to cause cooling problems on the rear cylinder in an inline.

The compromise is a flat (boxer) engine with 2 or 3 cylinders on each side. This also overcomes two other problems with radials: upper cylinders obstructing pilot view and oil collecting in the lower cylinder when stopped. You also have at least one of these problems with an inline, depending if you mount it upright or inverted.

Small aero engines can be either water cooled or air cooled. The designer has to ask: given the issue of reliability in aviation, does the weekend pilot really want an engine as complicated as the one in his car, with water cooling, cambelts and engine management, all of which could go wrong?

Radials tend to have a great power to weight ratio, but they are still heavy and complex.

Another big issue is their surface area. Compare a 300HP radial to a 300HP opposed 6-cylinder and you'll see that the radial probably has 9 cylinders and a big round crank case that must sit upright, facing into the air stream. That causes a lot of drag. The opposed engine, however, can be placed inside a small aerodynamic cowling with openings only for cooling air (or none, if you water cool it).

I think what it all comes down to, however, is that radials are great at producing loads of horsepower and torque. You can stack radials up to something like 50 aircraft-engine-sized cylinders before the friction causes diminishing returns. But what aircraft on the market today needs 5000hp and a two-ton engine? Radials that produce lower HP can be replaced by significantly smaller opposed engines that work just as well or better, and radials that produce large amounts of HP can be replaced with turbine engines that vastly outperform them on the higher end.

The only real use for a new radial engine today is to hear the sweet music they produce.

It's hard to find a general pattern in radial vs inline engines in WW2. Each country had engine manufacturers that produced the engines they were good at. An important consideration was how the engine performed at altitude, which required complex superchargers or turbochargers. In the US, the radial was far more developed. The only US inline engine to see much service was the Allison V1710, which lacked a quality supercharger. Turbocharged V1710s powered the P-38, making it an effective fighter at altitude. The Pratt and Whitney R2800 radial was used in the Hellcat, Corsair, and P-47. The Hellcat and Corsair were supercharged and performance fell off above 20,000 feet, not a problem for a naval fighter. The P-47 was turbocharged. The great size of the Thunderbolt was due to turbocharger ducting leading from the engine to the intercooler and back to the engine. The turbocharger allowed the P-47 to be effective at high altitude. The P-51 switched from the Allison V1710 to the Packard V1650, a license built Rolls Royce Merlin. The V1650 had a better supercharger for altitude performance.

In the UK, Rolls Royce produced the superb Merlin. It was so good that the Seafire and Barracuda carrier aircraft used it. As the war progressed, RR produced the Griffon, Napier the inline Sabre, and Bristol the Hercules and Centaurus radials. All of these engines were capable of driving a high speed fighter.

Germany switched the FW-190 from radial to inline in the D model in search of altitude performance as the BMW radial lacked a good high altitude supercharger. The original FW-190 owed its existence to not using the valuable inline engines needed for the Bf-109.

Japan and Italy never developed effective inlines. The Ki-61 fighter was mediocre with a German designed inline and became the effective Ki-100 with a radial. They also switched the D4Y dive bomber from inline to radial.

While the inline was more streamlined the radial could use the air cooling to produce thrust. The air comes in cold and leaves hot (like a jet). The radial saved weight by eliminating the liquid cooling system but the inline could be run more intensively because the engine cooling was more effective, resulting in smaller engines for the same power output. The radial was less vulnerable and eliminated the logistics of liquid coolant. By the way, about 50% of the cooling in a radial is from the oil, so even a radial is partially liquid cooled.

After the war, every airliner before jets used radials with one exception (I can't remember which) powered by the RR Merlin. Modern manufacturers don't need the massive power in the smallest weight and volume possible so they choose simpler designs.

Radial engines are better from the durability/mechanics point of view: having radially distributed pistons distributes the loads better and the shaft will be stressed equally from all directions. For resonance reasons you will (almost) always have an odd number of pistons.

Times have changed and manifacturing techniques have improved*. The benefits of the radial design justify no more the additional complexity and design effort required**, but even then some are still produced today. Also, in some cases engines are simply car engines re-adapted for an aircraft, cutting sensibly on development costs.

As Ratchet mentions, you have also the limited space for the pistons radially arranged, something that in the linear arrangement is limited only by the length available (and you could always switch to an H arrangement to double the number of pistons). Even if some multi-row radials exist.

On wiki they also raise some interesting points concerning mostly the cooling system, but also concerning placement of the engine and pilot field of view.

*: mostly metallurgy (better materials) and construction techniques (less imperfections in the components). Also, a better understanding of the science behind combustion has led to more efficient designs of the combustion chambers that, together with the fuel, has increased the overall efficiency of the engines.

**: on a radial engine you have the pistons all around (duh) and thus you need to have a distribution line that reaches all sides of the engine (one side only for a standard inline) and an injection system , especially for the bottom pistons, that does not suffer from being "upside-down" for all the time. Something that the inline approach does not (normally) need to take care of.

bottom cylinders can get oil that leaks above the piston after setting idle. If this is not managed, damage will result. They walked the prop through by hand in old wwII planes to clear this oil.

JazzyJazzy
1
$\endgroup$
1
Add a comment  |
Highly active question. Earn 10 reputation (not counting the association bonus) in order to answer this question. The reputation requirement helps protect this question from spam and non-answer activity.

17
Why are delta wings not commonly used in commercial airliners?
18
Why do reciprocating aircraft engines have more than one spark plug?
2
Why are ethanol piston engines apparently cheaper to maintain than avgas piston engines?
56
Why do most radial engines use an odd number of cylinders?
5
Why don't air-cooled radial engines use fuel to cool the oil?
5
Was the adoption of conventional tailplanes as 'everyday aircraft' inevitable, or are there other designs that can be just as good?
5
Why weren’t large, high-power radial engines built to take advantage of the Meredith effect?
7
Why are radial engines louder than inline engines?