Mitsubishi's Air Lubrication System blows a fine sheet of bubbles below the hull of a ship. The bubbles form a "carpet" on the hull, reducing friction. See Gizmag (yes, sorry) for some more information.

Let's assume that such a similar mechanism - something like the surface of an air-hockey table perhaps - would be feasible to implement on an aircraft.

What aerodynamic effect would it have? Could it, assuming it were feasible, provide any benefit to an aeroplane/helicopter/dirigible? 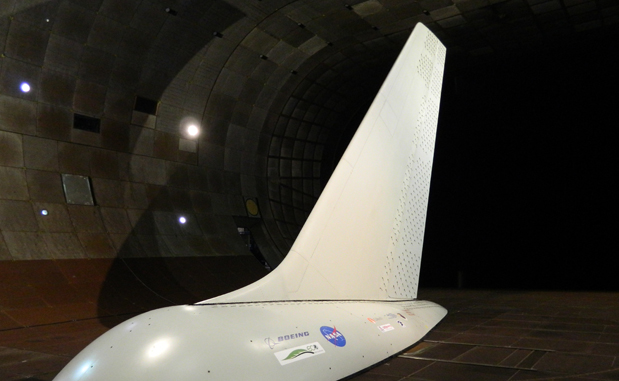 NASA tested a similar concept. They call it Active Flow Control, or AFC.

A full-scale 757 tail, equipped with active flow control, has demonstrated increased rudder effectiveness in wind-tunnel tests by Boeing and NASA that could lead to smaller, lower-drag vertical tails.

"Sweeping jet" AFC actuators were mounted on one side of the fixed stabilizer, just upstream of the rudder hinge line to blow on to the leading edge of the deflected surface. The 37 actuators were supplied with variable mass-flow pressurized air from an external source and were individually addressable so that different spacings and zones could be tested.

Tail fins are huge to help compensate for engine failures. But with such system blowing pressurized air out of holes upstream from the rudder, manufacturers can design smaller tails to save on drag and weight.

Another system that works by suction (not blowing) at the leading edge is on the 787-9/10. It is used for both the horizontal and vertical stabilizers on the -9, but Boeing dropped the horizontal stabilizer system on the -10. There were plans to use it on the upcoming 777X, but Boeing dropped it. That system is called hybrid laminar-flow control (HLFC).

4
Has research into the aerodynamic properties of non-smooth surfaces suggested any promising directions for future aircraft design?
0
Which tail type is better in order to obtain higher speed?

10
What is the benefit of spoilerons compared to ailerons?
42
What stops planes from being stolen?
10
Can airliners benefit from vertical take-off and landing?
21
Why is the Mooney's signature tail profile different from most planes?
6
Does the air resistance of a jet engine air intake count towards the jet's total air resistance?
21
How can we calculate the benefit gained from taping glider wing roots?
4
Can airplanes benefit from this “roughness” on bird wings?
3
Induced drag reduction from tandem wing