How does compression ratio change, if at all, from sea level to higher altitudes?

As I understand it, compression ratio is the max pressure inside the engine divided by the ambient air pressure. This is for turbojets and turbofans.

Sea level pressure is about 100 kPa. An altitude of 10 km would have an ambient air pressure more like 26 kPa.

So you would think the compression ratio must drop 4x, but the thing is, does the turbine spin any faster at high altitudes to compensate?

So how does compression ratio change, if at all, from low to high altitudes?

Edit: Maybe I should have started with hard figures. What are typical compression ratios for turbojets and turbofans?

The compression ratio of the turbo machinery will not change with altitude as long as the speed of the compressor does not change (excluding Reynolds number effects). This will lower the maximum pressure in parallel with the outside pressure.

However, to create the same lift at altitude, the aircraft has to fly faster. In 10 km, where the air density is roughly 1/4 of sea level density, the airplane has to fly twice as fast. Also, air temperature drops with altitude, so the flight Mach number increases even more. And this Mach number determines how much ram compression happens ahead of and in the intake. Flying fast will increase the intake pressure level, which partially compensates for the lower atmospheric pressure. Since the pressure rises with the square of the Mach number, fast airplanes have a clear advantage here.

Take the Concorde: Its Olympus 593 had a compression ratio of measly 12, but the precompression around the intake added another factor of 7 at Mach 2, so the total pressure ratio between the peak pressure in the engine and outside air was over 80! Admittedly, this air pressure was only 76 mbar at the cruising altitude of the Concorde, so the absolute peak pressure in the engine was a much less impressive 6 bar.

To answer the question about typical compression ratios: This correlates strongly with the age of the design: The first operational turbojet, the Junkers Jumo 004 of 1943, had a compression ratio of just 3.2 using 7 compressor stages. The more recent Eurojet EJ200 of the Eurofighter achieves a compression ratio of around 26 with a similar size and weight using 8 compressed stages, but produces almost 7 times more thrust. The main difference is better aerodynamics.

The most recent civilian engines achieve a pressure ratio of around 50 using 15 compressor stages. They can afford to compress the air more because they try to heat and accelerate the air as little as necessary during the combustion process. Since the maximum heat inside the engine is limited by the materials used, a higher compression in military engines would leave less thermal margin for combustion heating. The higher nozzle velocities of supersonic-capable engines are best achieved with less compression and more combustion heating.

Here is a plot of the pressure ratio trends for commercial transport engines (Epstein, 1998) 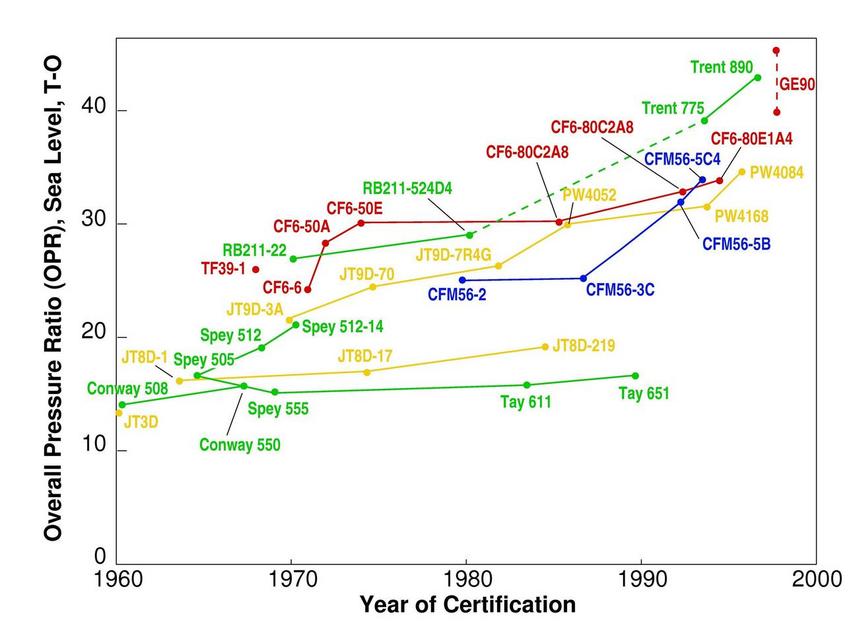 68
Why do jet engines get better fuel efficiency at high altitudes?
17
Can high-bypass turbofans cruise at high altitude?
12
What is a ramjet?
4
How does altitude affect the speed of sound?
1
Mach Factor - Factor increase of thrust due to the ram effect

9
Which aircraft endure the highest Max Q's (aerodynamic pressure)?
21
How are temperature differences handled in a jet engine?
18
How does contrail formation differ from turbofan to turbojet?
9
How is bleed air used to start a jet engine?
4
Does the P&W F100 turbofan engine of the F-16 really produce this much power?
4
Would this be a dangerous impeller to use for a drone?
33
Why don't modern jet engines use forced exhaust mixing?
3
How does fuel economy quantitatively depend on altitude for a jet?
2
How does altitude affect the TAS and thrust of an electric fan powered aircraft?