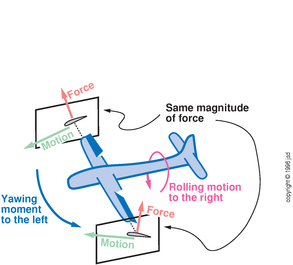 15
What is it called when you roll without yawing or pitching?
12
Can an aircraft be turned without rudder input?
7
What is aerodynamic damping?
5
Is there a formula to calculate how big a ventral fin should be?
3
Why does a banked aircraft create sideslip?
4
What factors determine the direction of the resultant force vector?

10
How does a tiltrotor yaw while in vertical flight?
6
Do aerodynamic forces and moments change aircraft pitch and yaw in the same way?
11
Do aircraft using only spoilerons for roll control, with no conventional ailerons, have a crossover airspeed?
5
Why is the 707’s yaw-damper-out lateral controllability marginal to nonexistent with flaps and spoilers extended?
3
What is the term for an aileron that’s also used as a ground spoiler?
15
How controllable is the 737 in single-engine manual-reversion flight? Is it controllably landable (or go-around-able) in this condition?
2
Why does a steady-state non-zero body yaw and/ or roll rate induce side force?
1
Is "excess thrust" possible in a steady state vector diagram?
2
Is the turning motion of a banked airplane caused by true centripetal force?