I've noticed on many military and commercial jets, the trailing edge control surfaces (ailerons and flaps) are separate from each other.

Why is this? Can't both serve the same function? It would save weight and complexity if one combined control surface ran the length of the trailing edge, instead of being split in half.

A particular example I found is the F-102 Delta Dagger. There's no conventional tail to experience disrupted airflow, so why have separate ailerons and flaps? 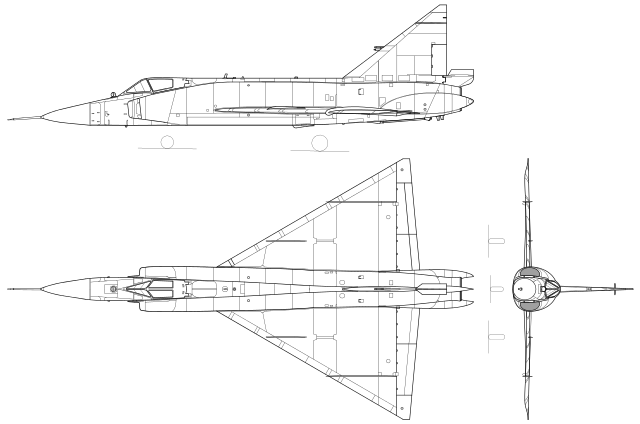 A similar idea that I know exists is the V-tail, such as in the F-117, which has "ruddervators"---combined elevators/rudders. It can still control yaw and pitch at the same time by somehow averaging the deflections. Presumably, combining and averaging ailerons and flaps should be even simpler, since they're both deflecting on the same axis.

Same reason you have split ailerons on most big airliners. The inboard surfaces deflect at higher speeds and the outboard ones are locked, reducing the twisting (torque) forces on the wings. It also allows for finer control (in fly-by-wire cases) as well. Like a lever, a small deflection of the outboard surface results is higher rate pitch/roll (in this delta wing elevon example) compared to same deflection of the inboard surface.

There is no "usually" here. For every aircraft with split control surfaces you come up with, I believe it would be possible to come up with an aircraft that either has one combined control surface (eg F-16 has flaperons), an aircraft that has some kind of a combination (eg F-18, which has an inboard flap and an outboard flaperon as can be seen here - warning headphones users -

or even an aircraft that doesn't even use ailerons (eg F-14, that only uses elevons and spoilers on the top of the wing for roll authority).

What you may consider to be less complex structurally might end up being more complex as much as the Fly-By-Wire software logic is concerned.

It would save weight and complexity if one combined control surface ran the length of the trailing edge, instead of being split in half.

If the trailing edge real estate is there, it makes sense to split control surfaces along their functionality. The issue is maximum deflection: at full flaps, a flaperon cannot command any additional aileron down input. Combining two or more surfaces poses issues such as identified in this answer.

Having said that, combining control surface functionality and applying computer controlled functionality means that the flight controls can be reconfigured, in case of battle damage for instance. That would increase weight and complexity, and also redundancy and survivability.

Not the answer you're looking for? Browse other questions tagged aircraft-design flaps control-surfaces ailerons or ask your own question.

5
Why aren't there V-tail airliners?

9
Why do the F/A-18 and the F-22 Raptor have horizontal stabilizer as well as canted rudders for pitch control?
16
What is the purpose of this aileron trailing edge strip?
14
Why are the outboard Krueger Flaps retracted before the others on the B747?
16
Why were the 747SP's trailing-edge flaps so much different than those of the -100/-200?
7
Why does the A320’s maximum allowable aileron deflection decrease, rather than increase, when the flaps are extended?
3
Aerodynamics of Flight Control Surfaces
6
How are the 737’s elevator and aileron cables attached to their control tabs without impeding the control surfaces’ motion under hydraulic power?
4
Why do almost all overwing exit slides open over the trailing edge of the wings, and almost none over the leading edge?
5
Why have high lift devices on both leading and trailing edge?
0
Elevator or Aileron?