What could cause a distinct tube of condensation over a wing?

I recently saw something I've not previously encountered: shortly after take-off, for a few seconds, an extremely dense tube of condensation rose from about 75cm in front of the wing, in-board of the engine, to a height of about 50cm above the wing and then raced back over it.

The tube of condensation was exceptionally well-defined. It appeared to have a diameter of around 15-20cm, which hardly varied, and a very circular cross-section. Its surface was smooth, and it appeared and a few seconds later disappeared as abruptly as if controlled by a switch.

As an illustration of some of the airflow over that portion of the wing, it was quite remarkable - I expected it to be more turbulent than that.

What was the likely source of this well-defined condensation? It appeared to originate from below and in front of the wing.

I've seen condensation form and travel across portions of the wing many times before, but never in this fashion, so I was thrilled to see it. 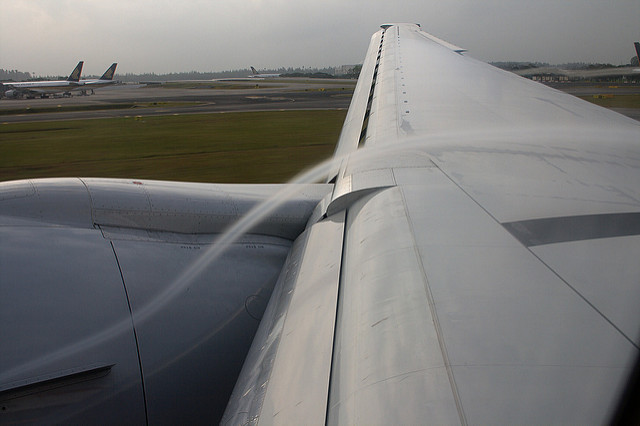 47
What is this flange on the engine?
28
What causes a plane's wing tips to leave a small white vapor trail?

13
What are the advantages and disadvantages of an oblique wing over a swing wing?
8
Why does condensation form on the wing especially during take-off and landing?
3
What does the pressure distribution over a glider's wing look like?
1
Are there multiple reasons for the decrease in pressure over a wing?
2
Why does the use of reverse thrust in flight on the DC-8 cause areas of separated/reversed airflow over the wing?
2
Visualising downwash over a finite wing
1
In which direction does air flow over a wing as observed from ground?
2
Why is air accelerating over the wing surface?
1
For jetliners, how is a swept wing justified over a thin wing?