How does the efficiency of a turbofan compare between take off speeds and optimal conditions?

I know turbofans are less efficient than propellers due to accelerating a smaller mass of air faster. So my question here is not comparing turbofans vs other engines, but compare how inefficient is a turbofan operating at take off and low speeds compared to that same turbofan in its optimal conditions?

In other words, how much is the efficiency loss? Are we talking about 5% or about 50%?

Also, why exactly that loss of efficiency happen (again, compared to the same engine at optimal cruise conditions)? Is it just the speed differential between the exhaust and aircraft airspeed, or is it something to do with the compressor/turbine efficiency?

To compare the efficiency we need to use the thrust specific fuel consumption (TSFC). It's the fuel per unit time per unit thrust. 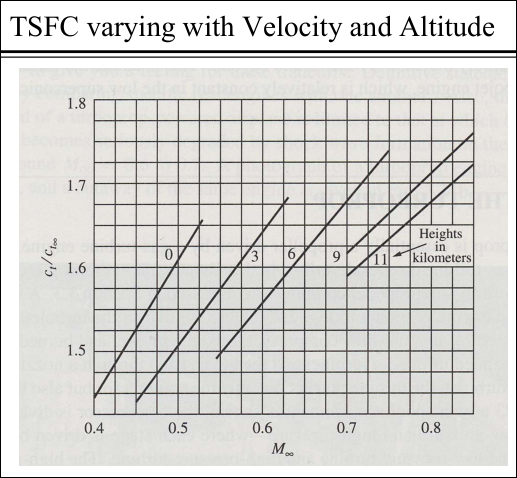 The lower the y-axis value (TSFC/TSFC0), the more efficient the engine is. TSFC0 being TSFC at sea-level and standstill. Speed increases TSFC, whereas altitude (more precisely: decreasing ambient temperature) lowers it a bit.

Taking the extremes from the example above:

On ground a turbofan engine is more efficient than in cruise when it comes to fuel consumption per thrust given.

But if you're comparing different airplanes, then the distance covered is also taken into account.

Fuel consumption per [distance] can be a more appropriate comparison for aircraft that travel at very different speeds. 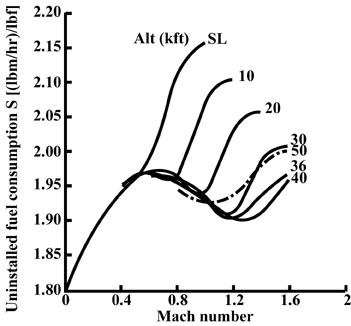 For supersonic jet engines it's different as shown above.

Not the answer you're looking for? Browse other questions tagged turbofan efficiency or ask your own question.

17
Why is max endurance different for jet and props?
11
How do contemporary Russian jet engines compare to Western ones?
1
Why is the ratio of TSFC at altitude vs. sea level different for hi-bypass vs. lo-bypass turbofan engines?

47
Why is the Tu-95 so efficient despite having propellers that spin faster than the speed of sound?
1
How do turbofans and piston-engines compare in terms of maintenance costs?
7
Why aren't there any single turbofan airliner?
4
Does the P&W F100 turbofan engine of the F-16 really produce this much power?
3
How does the power distribution change for a turbofan engine from being stationary to going at full speed?
2
What mechanism did the turbine reversers of early high-bypass turbofans use?
2
Does jet engine exhaust velocity relative to itself remain constant despite speed changes?
0
How does 'standalone' propeller efficiency change with altitude?
0
Why is tangential velocity a loss of kinetic energy in a turbine section?