Is it centrifugal force that allows a non-aerodynamic body to achieve lift purely because of thrust? [closed]

If a body has a greater than one thrust to weight ratio, then is the centrifugal force acting perpendicular to the Earth's gravitational pull that allows it to fly ?

Or are there other forces that I am not aware of being at play here ?

So, when a body is moving on the surface of the Earth, we can assume that it adheres to some semblance of circular motion.

Any body in circular motion will experience an outward force perpendicular to the direction of motion. 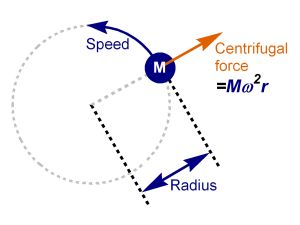 So, given enough thrust, can any body fly because of the centrifugal force created against Earth's gravitational force ?

Basically, you're asking 'Can you achieve orbital velocity in atmospheric conditions?'.

Orbital velocity is approximately equal to

The current speed record for sustained atmospheric flight is just shy of 2200mph (which, interestingly, stems from 1976 and was set by the SR-71 Blackbird). This means we're still a factor 8 short. Since drag is roughly proportional to the square of your velocity, this means we're a factor 64 short of thrust on a similarly designed airplane. But I think by that time you'll be running into all sorts of interesting exotic effects, not the least of which is that your airplane will desintegrate by the massive amount of compressive heating (basically, you're doing a 'sustained' orbital re-entry maneuver in a much thicker part of the atmosphere).

The answer is then, hell no. Not as long as Earth has an atmosphere.

Note: if you're asking about vacuum conditions, then the figure you're looking for is delta-V, not thrust-to-weight ratio. The delta-v of your craft must exceed aforementioned orbital velocity. Your T/W ratio doesn't come in to play at all.

It is not centrifugal force that allows a non-aerodynamic body not designed to be aerodynamic to achieve lift by harnessing the energy from thrust unless it is going so fast that it is in orbit.

If an object is moving fast enough, it would eventually get to the point where it would be in a low orbit; in that case I suppose you could say it is the centrifugal force keeping it at that height (orbiting), and of course, the lower it is the faster it must move, and the more thrust is required to counter the air resistance.

Typically when we talk about something moving through the air, the thing providing a constant height would be the aerodynamic force acting on it. Even a brick can fly aerodynamically by creating lift from striking air molecules if it has enough thrust to keep its speed high enough to do so.

I don't mean to exclude thrust vectors here. Of course, the angle of thrust will play a part even when there is Newtonian aerodynamic lift.

If you're talking about orbital properties, check this out in the space section of SE.

So, given enough thrust, can any body fly because of the centrifugal force created against Earth's gravitational force?

Yes, but it would be called orbiting, not flying.

Not the answer you're looking for? Browse other questions tagged aerodynamics lift aircraft-physics g-forces groundspeed or ask your own question.

4
How to handle the formula for computing net thrust of closely coupled engine systems for an engine with a nacelle that has non-circular dimensions?
2
Why is the force that moves an airplane forward called THRUST and not PULL?
1
Forces “felt” by pilot, G-meter, inclinometer--are they the aerodynamic forces generated by the aircraft, or the sum of weight+centrifugal force?
1
Is drag the only aerodynamic force that acts upon an asymmetric body (a glider in particular) travelling through the air?
2
Why does a steady-state non-zero body yaw and/ or roll rate induce side force?