How to calculate angular velocity and radius of a turn?

How can I calculate with known tangents of different angles and by rules of thumb?

Which formulae should I use for fps and NM?

Your terminology is a little confusing, but I'm going to assume you're asking how to calculate turn radius and rate of turn based on airspeed and bank angle. These formulas can all be found in the FAA's Pilot's Handbook of Aeronautical Knowledge which is available for free online.

The Handbook gives the formulas for rate of turn and turning radius on page 4-34:

The "magic constants" in these formulas ($11.26$ and $1,091$) are conversion factors for the units involved (knots, feet, and degrees). Physicists would use unitless formulas involving $g$, acceleration due to gravity (roughly $9.8m/sec^2$).

You can also rearrange the formulas above using simple algebra to figure out the required bank angle given a desired rate of turn or turn radius.

Finally, note that things get a lot more complicated if you factor in winds aloft. Rate of turn will always be the same regardless of wind, but turning radius no longer applies because the aircraft will trace a spiral path along the ground, not a circle. The turn will be "sharper" on the upwind portion of the turn and "wider" on the downwind portion. This is why turns around a point is a complex maneuver taught in basic flight training: in order to fly a circular ground track, the pilot must constantly vary the aircraft's bank angle according to wind: lower bank angle upwind, higher bank angle downwind. The pilot must also use the rudder correctly to keep the turn coordinated at all times.

There are also some "Related Questions" over on the right-hand side of this page that might be useful.

After all these answers with Imperial Units, let me explain it with SI units, starting from first principles. R is the radius, v the flight speed, m the mass, g the gravitational constant, Φ is the bank angle and L the lift. 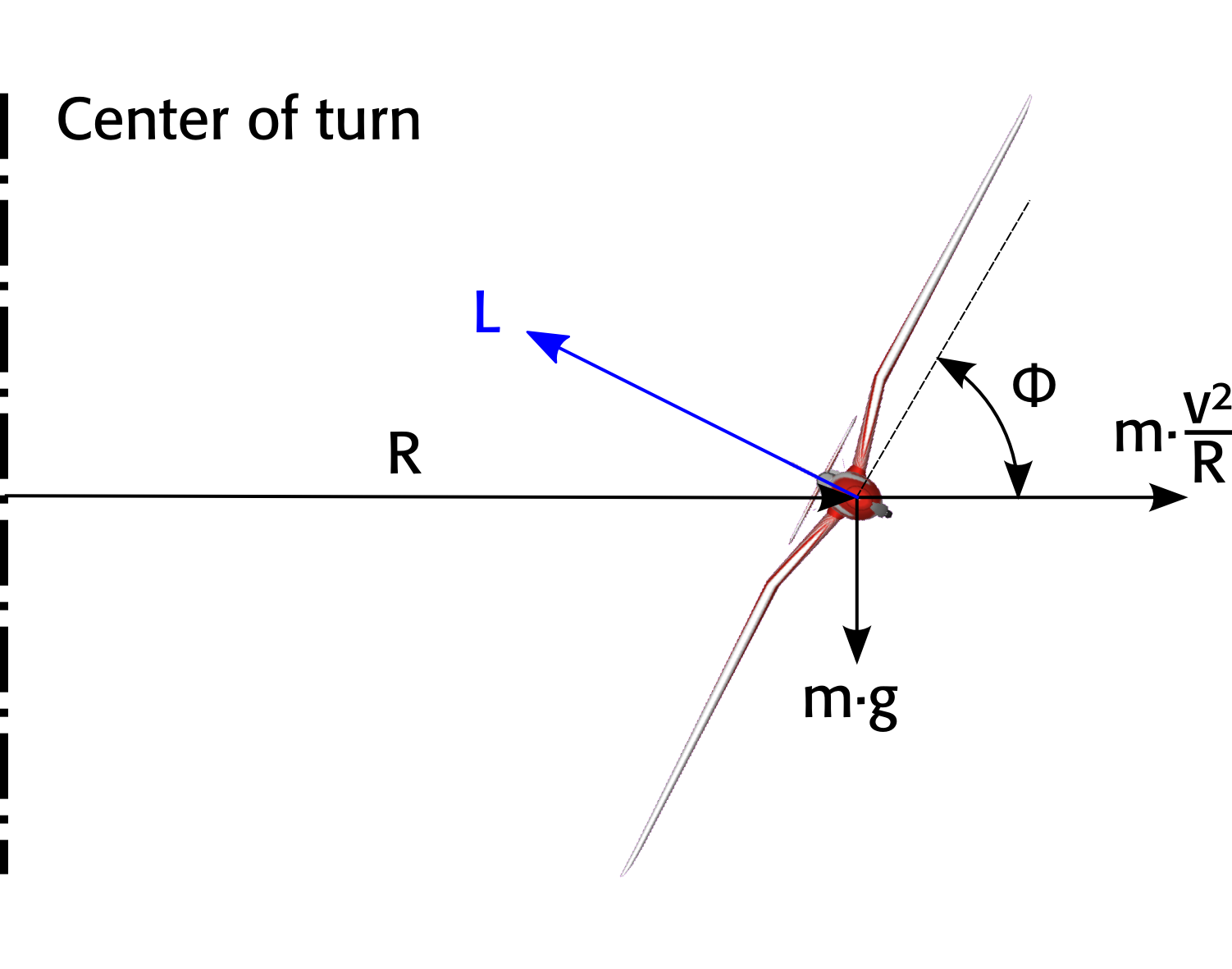 with ρ the air density, $c_L$ the lift coefficient and S the surface area of the wing. Now convert so you get v:

Now you can see that the nominator cannot become zero or less, which gives you the minimal radius for a given speed and maximum lift coefficient $c_{L max}$:

This is like a "radius barrier": Turns cannot be flown tighter than that. This is due to the increase in centrifugal force which comes from flying steeper turns. The steeper the turn, the faster you must fly to create enough lift to compensate both weight and centrifugal force.

What does still increase is your angular velocity ω:

Below I have plotted them for a glider. You can clearly see the radius barrier at 40 m. Trust me, it looks just the same for an airliner, only the numbers are bigger. 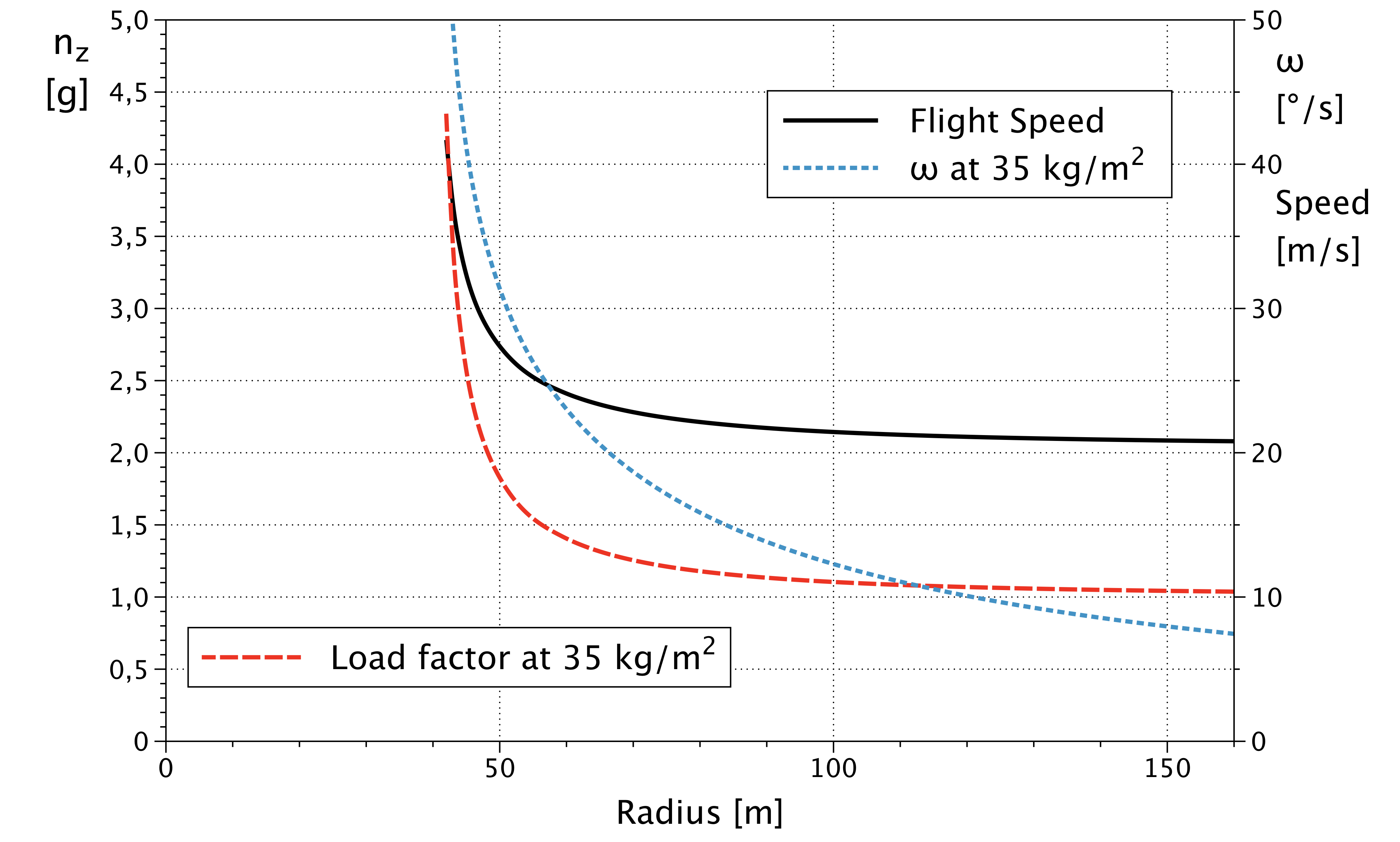 For the turn rate in degree per second, divide 220 by your airspeed in meters per second. Flying slower allows for a higher turn rate.

Now for the other extreme: Hypersonic aircraft need lots of space for maneuvering. I have here some values, just for fun:

The high speed makes this almost tolerable, after all, a half turn at Mach 6 and 2 g takes only 336 seconds, that's under 6 minutes. Airliners bank to only 30° or less, so the first column is valid if you fly your hypersonic vehicle like an airliner.

If you're going to do this in a cockpit, a good rule of thumb will help more than an exact formula:

Turn diameter is 1% of the speed.

Another approach is to just note that in any level turn, the relationship between total aircraft G ($G_T$), radial G ($G_R$), and God's G must conform to Pythagoras.

total aircraft G, of course is just the Lift divided by the aircraft weight. and if we are below maneuvering speed, (lowest airspeed at which we can generate placard G-Limit load factor) and turning at the maximum Angle of Attack (AOA), then aircraft Lift is $C_{Lmax} p V^2 S$ and the weight, of course, can be represented by the Lift generated at at $C_Lmax$ when at Stall speed or $C_{Lmax} p V_s^2 S$.

Graphing, it looks like the below: This is for an aircraft with a stall speed of 58 kt (true) and a placard G-limit of 3.8 Gs. (The kink at 122 Kt is due to the fact that once we are faster than maneuvering speed, we are limited by placard G and can no longer reach $C_{Lmax}$ without breaking or over stressing the airframe.) 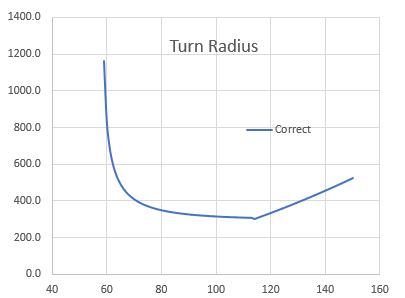 A simple rule of thumb for turn radius for a standard-rate turn is to divide airspeed by 180. For example at 90 kts it is .5 nm, and at 120 kts it is .66 nm. The turn radius is useful to decide when to lead a turn when approaching a fly-by fix. So for example at 90 kts, when .5 nm from the fix, begin a 90 degree turn. This is calculated by considering the speed of 90 nm per hour = 90/60 nm per minute, for 2 minutes for a standard rate turn, gives a 3nm circumference circle, which is approximately pi, so the diameter of that circle is approximately 1, and the radius is 0.5 nm. Substituting x for 90 in the original formula gives pi*2x/60 approximately equals x/180. Note that this does not account for wind or true airspeed.

0
How to find Radius of Turn given groundspeed and bank angle?
27
What is the maximum safe bank angle of a 747?
12
Are the functions of ailerons and rudder similar?
7
By aircraft design, excluding engine power, how do you make planes that have a tight turn radius while maintaining speed?
4
How can I compute the minimum possible bank angle for a turn with a given radius?
2
How do I make a simple model to simulate a banked turn?
3
How to calculate the inaccuracy in the "standard" turn radius equation, for supersonic airspeeds
1
What is the maths behind Loitering of Aircraft?
0
How can one calculate the maximum instantaneous bank angle a plane can do in a certain time?
0
How to anticipate the radius and rate of turn under specific conditions?
See more linked questions