Where is RC aircraft flying allowed in the US?

In the US, where are you allowed to fly RC aircraft? AMA says you should stay away from airports and below 400 feet. Is there any actual law about this?

I'm guessing you are free to fly on your own property. How about other places? Does it have to be an actual RC field? Can it be a park, as long as you don't endanger anyone?

If this varies with local rules, is there some reference for finding more information about which areas allow/disallow it?

Everything in the second section (my original answer) used to be true (well, except for the first statement), but doesn't consider that the FAA Modernization and Reform Act of 2012 made this regulatory.

The FAA has a webpage that discuss it in more detail , but here is an image that covers the basics: 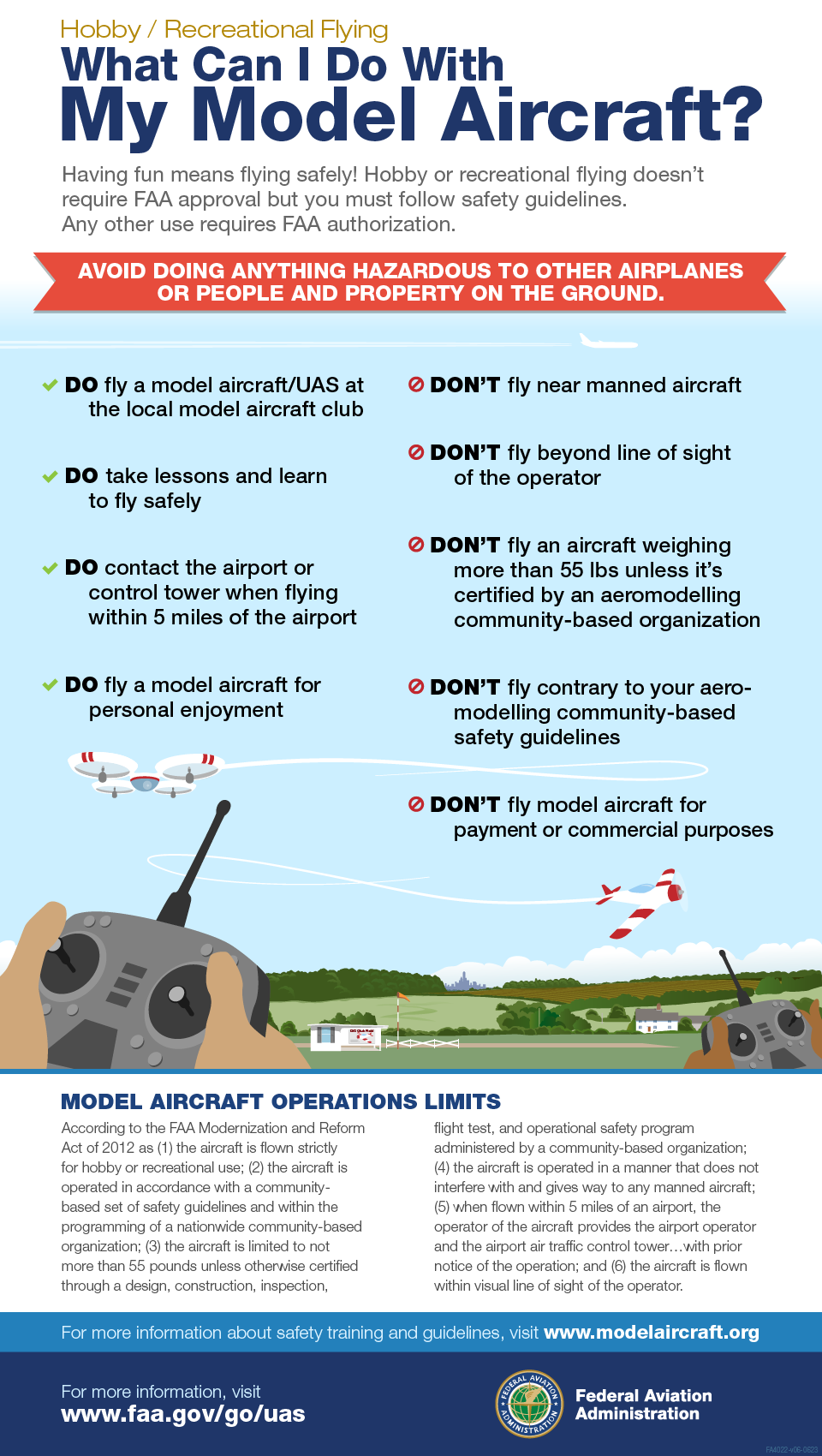 There is also a much more detailed letter of interpretation from the FAA which discusses their ability to enforce the regulation and many other parts of 14 CFR 91 if a model aircraft endangers another aircraft, flies within 5 miles of an airport without receiving a clearance, flies into a restricted area, etc.

The short version is that it isn't regulated (yet). For more details, read on.

FAA has an Unmanned Aircraft (UAS) Questions and Answers page on their website which addresses this:

Do I need permission from the FAA to fly a UAS for recreation or as a hobby?

There are two ways for recreational or hobby UAS fliers to operate in the National Airspace System in accordance with the law and/or FAA regulations.

Option #1. Fly in accordance with the Special Rule for Model Aircraft (Public Law 112-95 Section 336). Under this rule, operators must:

Fly for hobby or recreational purposes only

Fly the UAS within visual line-of-sight

Give way to manned aircraft

Provide prior notification to the airport and air traffic control tower, if one is present, when flying within 5 miles of an airport

Fly UAS that weigh no more than 55 lbs. unless certified by a community-based organization

Register the aircraft (UAS over 0.55 lbs. and less than 55 lbs. can be registered online at registermyuas.faa.gov; UAS 55 lbs. or greater must be registered through the FAA's paper-based process)

The other option is to obtain a pilot certificate and comply with part 107 UAS regulations.

1 - PURPOSE. This advisory circular (AC) provides guidance to persons operating Unmanned Aircraft (UA) for hobby or recreation purposes meeting the statutory definition of “model aircraft” contained in Section 336 of Public Law 112-95, the FAA Modernization and Reform Act of 2012. This AC describes means by which model aircraft may be operated safely in the National Airspace System (NAS). Nothing in this AC changes the requirement to comply with the statute or any applicable regulations.

b. Model Aircraft Hazards in the NAS. While aero-modelers generally are concerned about safety and exercise good judgment when flying model aircraft for the hobby and recreational purposes for which they are intended, they may share the airspace in which manned aircraft are operating. Unmanned aircraft, including model aircraft, may pose a hazard to manned aircraft in flight and to persons and property on the surface if not operated safely. Model aircraft operations that endanger the safety of the National Airspace System, particularly careless or reckless operations or those that interfere with or fail to give way to any manned aircraft may be subject to FAA enforcement action.

(1) The aircraft is flown strictly for hobby or recreational use;

(3) The aircraft is limited to not more than 55 pounds, unless otherwise certified through a design, construction, inspection, flight test, and operational safety program administered by a CBO;

(4) The aircraft operates in a manner that does not interfere with, and gives way to, any manned aircraft; and

d. Public Law 112-95 recognizes the authority of the Administrator to pursue enforcement action against persons operating model aircraft who endanger the safety of the National Airspace System. Accordingly, model aircraft operators must comply with any Temporary Flight Restrictions (TFR).

f. All other operators and for additional information on Unmanned Aircraft Systems please visit: http://www.faa.gov/uas/ .

Note that this is "guidance" and recommended procedures that the FAA "encourages voluntary compliance with" in order to "reduce the potential for hazards and create a good neighbor environment with affected communities and airspace users."

That being said, any city/county/state could have rules on their books, but there is not national guidance for this.

General American law: it's legal if it ain't illegal. And there's no overarching law that covers all RC airplanes. So the law is you can fly them except where you can't. That may sound unhelpful, but my point is that unless where you are has specific laws or rules against it, you're fine. There's also a general restriction on commercial use.

What many people don't know about is Temporary Flight Restrictions(TFRs). TFRs happen all over the country for all sorts of reasons, and they are just what they sound like: a temporary restriction on flying over a certain area. They could be for wildfires, or large events, or VIPs. When the President of the US travels, there is usually a 30 mile radius TFR put up around the area.

The reason I bring this up is these TFRs almost always include "no RC airplanes" as a restriction. So the President visits a city 25 miles away, you fly your RC airplane in your backyard, and you're technically breaking federal law.

The short answer is: commercial flights (money is involved) are almost always illegal. Hobby flights (no $) are not controlled by very many binding laws, but "strong guidance" is given in the above poster, including 1) not over groups of people, not near airports, etc., and (more controversial) always below 400 feet. The legal basis for the statement that you "must follow safety guidelines" does not exist. People in my club go out in the desert and fly several thousand feet high, for example. But they would never do that at our regular field, because they know it is stupid, unsafe, and will upset the local helicopters! This is a very controversial and evolving area. The FAA is attempting to assert much greater de-facto jurisdiction, for example by proposing a definition that on paper might regulate unpowered balsa wood aircraft. It is pretty clear that the FAA has the right to forbid commercial flights, although a recent court case has cast some doubt on the actual limits.
Check out the Academy of Model Aeronautics for the organized hobbyist's view. http://www.modelaircraft.org/documents.aspx

I have to comment some of these answers. I fly "real" aircraft as well as R/C aircraft.

Flying at thousands of feet of altitude in violation of regulations IS dangerous, whether over an airport or in a desert. VFR airplanes and sailplanes routinely fly only a few thousand feet up, and the operation of RC aircraft at those altitudes is reckless. I personally nearly collided with an RC aircraft during a VFR flight as I approached an airport for landing. At the time I was at approximately 1500' AGL. The R/C plane missed my windshield by less than a wingspan.

Evan an unpowered balsa wood toy aircraft is dangerous. If an aircraft propeller blade hit it, it could damage the prop, causing it to become unbalanced, resulting in damage to the engine. While extreme (and probably very unlikely scenario), it is valid. Just because an object is lightweight or unpowered does not mean it does not present a danger to real world aircraft. Just because you "safely" broke the regs 1000 times doesn't mean it will be safe the 1001st time.

While I agree that many government regulations are overbearing and may overreach their authority, encouraging people to flout regulations is not a good way to build credibility for R/C enthusiasts. It will just end up hurting the sport for all of us.

15
What damage can occur and what penalties will you face for flying a quad rotor into a restricted airspace?
12
How do you contact ATC if you want to do RC flying in the US?
7
Can foreigner fly model aircraft (quadcopter) in US without being part of an organization (like AMA)?
1
Why aren't AMA certified radio-control club sites shown on aeronautical charts?

5
Is there any combination of aircraft and airports where no alternate landing airport would be possible?
8
What are the limiting factors when flying a model UAV plane to high altitude?
10
Where is a missed approach point for circling while flying ILS?
7
Is commercial domestic service using foreign registry aircraft allowed in the USA?
1
Why aren't AMA certified radio-control club sites shown on aeronautical charts?
8
Is it allowed to scatter human cremains (ashes) from an aircraft?
6
What is the maximum allowed difference between two altimeters for flying in RVSM airspace?
3
If an aircraft has two altimeters what is the allowed difference between them?
2
What is the maximum roll rate for an RC aircraft of low maneuverability?