What does "storing an aircraft" technically mean?

I have read on wikipedia about airline fleets and you sometimes see that they have aircraft which they declare that have been stored.

Technically what does this mean? How do you store and aircraft? Being the plane out in the open air and susceptible to weather, wouldn't delicate parts and even the fuselage degrade quite quickly?

Are stored airplanes then reused or resold in the future?

Wouldn't it be more feasible just to sell them instead of storing them for a period of time?

Depending on how long you are storing the plane, there are different options.

Some planes may be used or sold in the future. They are just waiting for the market conditions to improve so that the owner can afford to operate it again, or someone else would be willing to buy it. Some planes are too old for anyone to want to buy them. In this case, they are most useful to the current owner, so they store them in case they will be useful in the future. Another possibility is spare parts. While the plane is stored, it can be slowly disassembled to provide parts for other aircraft still in service. Once all useful parts are removed, it will be chopped up into scrap metal.

Recently, some new aircraft are being stored until they can find more pilots. There is also a case where the Air Force decided to purchase some planes, but later decided they didn't really need them. It's cheaper to send them to storage than cancel the contract, so straight to the desert they go.

You can rent hangar space somewhere to store the plane. This is much harder to do for larger planes, and hangar space is expensive and limited. However, it obviously offers the best conditions for the plane, where it can be protected from the weather. This is more likely to be a short term solution unless the plane is very important (or the owner has deep pockets).

Another option is the "boneyard:" 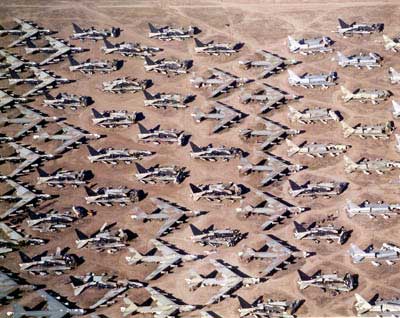 Areas like the US southwest have very low humidity year round, which reduces the amount of corrosion on an airframe. Airplanes are designed to be outside most of the time anyway, so they will hold up pretty well. Windows may be covered to keep the internal temperatures down, and certain gaps may be covered as well. Small airplanes may be completely wrapped in plastic.

Some examples of this include the boneyard at Davis Monthan AFB in Tucson, AZ, where the US military parks its planes, and nearby Pinal Airpark, where many civilian aircraft are stored.

Here there are some nice considerations. You can basically divide stored aircrafts in two main categories: short-term and long-term.

From the link, for long-term:

When discussing parked or stored aircraft, it is safe to assume one is referring to an aircraft that is no longer in operation and has been placed by the owner, airline or lessor into a manufacturer-approved storage regime to preserve maintenance and asset value.

However, some will also refer to stored aircraft as those that are between owners. [...] a transition [...] takes time and [...] As such, an aircraft will often be stored and out of revenue service for six to 12 weeks.

Additional or unusually lengthy checks can delay the aircraft from revenue service for many months, during which time they are sometimes referred to as parked or stored.

but in the end, to answer why they are not sold:

With the exception of these transitions, the majority of aircraft in storage are there because they are no longer economically viable to operate; it is cheaper to put the aircraft into a storage programme than to fly it.

You keep it safe so that you can scrap it.

Not the answer you're looking for? Browse other questions tagged aircraft-storing or ask your own question.

4
What do airliner manufacturers do with aircraft for which have no buyers?

3
What is the minimum distance between two civil airplanes parked in a hangar?
25
What is the most economical way to store a small aircraft in a place with severe weather?
15
Why keep the doors open for aircraft in boneyards?
5
What kind of container should be used for storing a disassembled Cessna 172?
2
Can all airborne aircraft be stored at their origin or destination airport?
2
Why are some parked aircraft angled away from the taxiway center line?
32
Why do these aircraft in long term storage have air and power connections?