Should a pre-flight inspection spot snakes on a plane?

In January 2013, a python hitched a ride on plane, unfortunately exposed on the wing after getting sucked out of its hiding place.

Having done walk-arounds for a Cherokee, I would like to think that I wouldn't allow such an event to happen on a small plane. On the other hand, I realize that it would be impossible to do a thorough inspection on, say, an Airbus A380.

What is a typical preflight inspection checklist for a Dash 8 or similar plane? Would it have included, for example, a visual inspection of the flaps that would have allowed the snake to have been spotted?

Given the location of the snake from the photos/video in the article and the height of the wing/engine assembly (as shown below) I think it's entirely possible to miss this critter in preflight. A visual inspection of the control surfaces is certainly a part of the preflight, but unlike on a small aircraft (say a Piper Cherokee or Cessna 172) you will probably not be getting "up close and personal" with the control surfaces - you would need a ladder to to so, and the sort of in-depth examinations that would require getting up on that ladder would probably normally be performed by maintenance personnel.

A pilot doing a preflight might get up on a ladder if they noticed something amiss (say a snake obviously hanging from the wing), but on a simple pre-filght visual inspection from the ground this unfortunate critter could easily be missed - particularly if it was curled up tightly in a small space as snakes are wont to do, and didn't have its body hanging out where it could be seen. 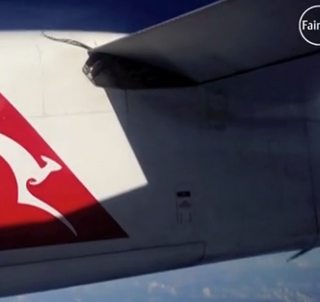 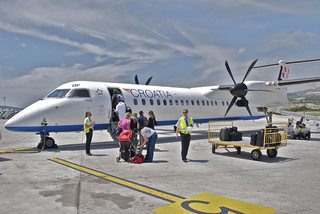 Not the answer you're looking for? Browse other questions tagged airline-operations preflight dash-8 australia or ask your own question.

7
Could an EFB-based pre-flight check be automated?
22
What scientific evidence is there about the effectiveness of pre-flight walk-arounds?
15
How does one test a stall warning during pre-flight?
0
What should I expect to happen when I get on a skydiving flight
9
Why was this commercial plane highly delayed mid-flight?
1
Difference between general visual inspection and pre-flight check inspection
19
Why are propellers de-iced before the engines are started, and does ice on the fuselage affect the flight characteristics of the plane?
4
Why might flight schools prohibit you from testing pitot heat during pre-flight?
6
How do fighter jets pre-flight so quickly?
3
Inspection panels and meaning of "free" in pre-flight check list