How large and heavy is the B737's built-in stair?

Some version of B737 have built in stair, which allows passengers boarding and exit without jet bridge or stair car.

How much do the stair systems weigh? And how much volume do they occupy?

A number of 737s are fitted with forward airstairs (and aft ones too). The Boeing Airplane Planning Document gives the airstairs opening as 0.41 X 1.12m, while the airstairs can be folded to less than 2.5m length. This should give the volume occupied by the airstairs. 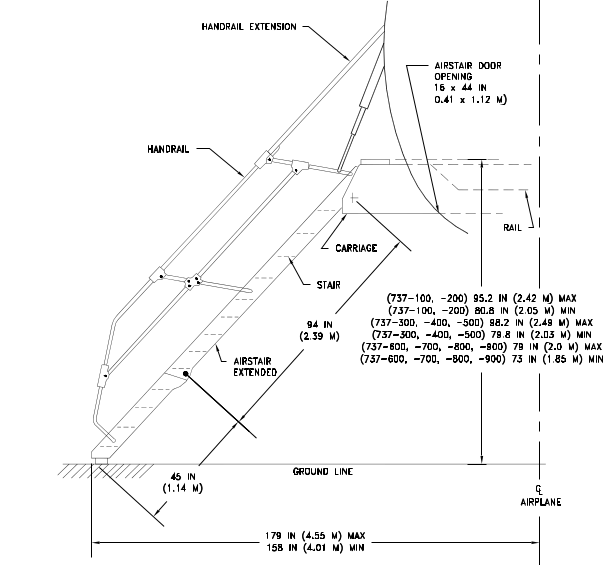 According to an article in aviationpros, the total system weighs in around 200 lbs:

Aircraft such as the DC9, MD80, MD90, and 737 aircraft have had a long enough history that many of them were built with the forward passenger air stair assembly. Many aircraft were also converted to non-airstair versions Ñ a 200+ lb. weight savings for the operator.

24
What is different between a B737 and B757?
16
Is it possible to do a barrel roll in a large aircraft like a B737?
4
Do real aircraft have something close to the GPS/NAV modes in FSX?
4
Why do the 737-100/200’s thrust reversers blow fully open if hydraulic pressure is removed while the reversers are partly open?
4
How much was the engine moved in the B737 Max w.r.t. older versions?
7
Are the Boeing MCAS and Airbus Alpha Protection systems the same?
6
What turn to intercept a radial and how to tune in B737ng sim?
5
How are the 737’s elevator and aileron cables attached to their control tabs without impeding the control surfaces’ motion under hydraulic power?
2
How does the B737's 'throttle offline' setting work?