Why does this plane not pitch up after a dive?

I've tested my RC plane yesterday. It's a canard. After hand launching, the plane goes straight, then I change the elevator to go down and it's going down, but when I pitch up the canard doesn't work and the plane crashes. 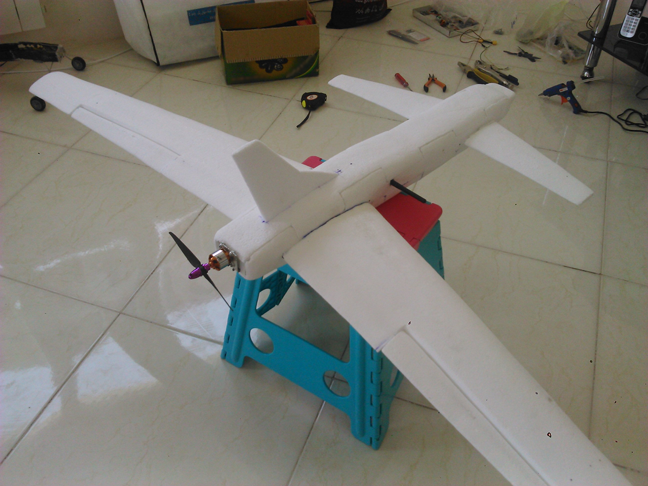 Thank you for giving more information, but I still have to resort to speculation. Here are some things you might want to consider:

However, from the picture it might well be that you use a full-flying canard. In that case, the incidence is set automatically by trimming, and a nose-up command means increasing the incidence further. Now the control commands do not change the camber of the canard wing which reduces both the amounts of maximum and minimum lift possible. Better use a canard with a stabilizer-elevator combination to increase control power.

You talk of cutting and sanding. Are the wings and canard made from styrofoam? Then @TipStall is right: The plane lacks stiffness. Commanding a descent (what you described as "going down") increased the dynamic pressure and thus the forces warping wings and canard.

For now, I think you suffered a canard wing stall, but I am not able to say why. Either it was aeroelasticity (twisting of wing and canard) or insufficient control power. In that case, use a stabilizer-elevator combination for the canard, throttle your engine and maybe consider a less stable aircraft by shifting the c.g. back a bit.

My vote is that the surfaces aren't rigid enough and get twisted so much that the control surfaces can't overcome the effect. How floppy (non-rigid) are the wings and the canard surfaces? The wing looks to be sagging under its own weight! My thought too is that you're tail heavy, tail heavy will pitch both ways and you can get stuck in either positive or negative stall (or tuck). Tail heaviness causes the plane to tend towards going or falling flat like a leaf; it's usually strongest (leeast recoverable) when under the influence of negative G's. It doesn't matter whether the craft is upright or inverted; it's still "negative G's" including the caused airflows. Still, my best guess is weak surface rigidity. Good luck with your cool project!!!

I would suspect a combination of a very nose heavy CG, and not enough up elevator control throw, but it's impossible to determine based on the information given.

To add to Greg's answer (which points to the two most obvious suspects), I'd say that a typical stable canard should have a higher incidence on the canard than on the wing. You can offset it with a constant pitch up trim, but apparently you don't have enough of it (for the chosen CG position).

Not the answer you're looking for? Browse other questions tagged model-aircraft or ask your own question.

1
Why is white light more visible than red and green on this Cessna model on a sunny day?
3
How can I fix the stalling of an RC plane after the addition of floats?
19
How does this RC helicopter keep itself upright?
5
What does this formulation mean?