How is TACAN different from the VHF Omnidirectional Range (VOR) system?

A very short question, but the answer calls for describing several techniques which are by themselves difficult to summarize without taking liberties with reality, so the post is rather long and should be read by sections of interest rather than totally at once. And for those not interested in the design techniques, fortunately there is a...

I'll focus on explaining bearing determination systems, and explain the DME as an integral component of the TACAN. In addition there are two types of VOR, conventional and Doppler, which work very differently even if they deliver compatible signals to the (unsuspecting) common receiver.

The common principle of bearing determination is to send two signals from the ground station:

The receiver determines its relative bearing by comparing these two signals. Both signals are sine functions, the orientation value is represented by the current phase of this function. Both VOR and TACAN use this basic principle, albeit they realize it differently.

The signal phase has the major role in this story, so let's be sure we agree the meaning:

Phase angle of a sine wave

From that, it is clear that comparing phases of two signals with the same frequency (simple to do with electronics) is equivalent to comparing how much time one lags behind the other (time is actually difficult to measure).

Conventional VOR (CVOR) and Doppler VOR (DVOR) stations are perceived identically by the receiver, though they transmit very different signals. The DVOR use tricks to mimic a CVOR and deceive the CVOR receiver. CVOR have nearly disappeared from sight because, due to their sensitivity to reflections, they cannot be located on airfields or close to roads. However en-route/high altitude CVOR can be found at isolated places, the reason is they are more compact and have a smaller cone of silence than DVOR and reflections can be minimized, e.g. when the VOR is located at the top of a hill.

Understanding the DVOR tricks without knowing how a CVOR works is difficult, and doesn't give clues on how the bearing is really determined. So I'm afraid we need to understand the CVOR before the DVOR.

Early CVOR antenna used to be an array of four Alford loops at the corners of an imaginary square, known by their conventional names: NW, NE, SW and SE. NW+SE loops form the first pair, NE+SW loops form the second pair.

Recent generations of CVOR use a slotted antenna, which is a fixed cylinder with vertical slots (generally four slots):

CVOR with slotted antenna and the DME antenna on top. Source: AviaTecho.

CVOR creates and uses reference and variable signals this way:

The lack of precision of the VOR is rooted in two design choices:

In the Doppler VOR (once again... there are two types of DVOR, the single sideband and the double sideband, I'll describe the DSB here):

In order to be compatible with the CVOR receiver, other changes had to be made:

The principle of a Doppler VOR is to create the frequency modulation by Doppler effect rather than by electronic modulation. The Doppler effect occurs with a moving wave source: In spite the source has a constant frequency, when it comes closer to the receiver the apparent frequency is higher than the actual frequency. How much higher depends only on the closure rate.

Doppler effect on train noise: Sound is higher-pitched at the front than at the rear

In the DVOR, pairs of opposed antennas (still Alford loops) are constantly switched on/off, scanning the full array anti-clockwise, the full scan being done 30 times per second. Actually there are two groups of antennas rather than two antennas involved to allow for blending (smooth transition from one pair to the next), but let's simplify for a second. From a receiver standpoint, the signal seems to come from a moving source, and therefore a Doppler shift will occur in a proportion which depends on the apparent direction of the move.

To allow for compatibility with the CVOR receiver, this shift must be at most 480 Hz, 480 Hz being the FM swing of the subcarrier in the CVOR. A simple calculation shows the array diameter must be about 14 m (46 feet).

To generate the FM modulated signal, the unmodulated 9960 Hz subcarrier is sent on the "rotating" pair of antennas. The Doppler shift is maximum when the receiver direction is tangential to the pair trajectory and minimal when the pair is perpendicular to the direction of the receiver. This shift is exactly representative of the aircraft bearing and is the variable signal modulation we need.

From a radio signal perspective, only the sideband frequencies are used to transmit the 9960 Hz subcarrier (VOR frequency f +/- 9960 Hz). The carrier is itself sent on the central antenna, AM modulated by the reference signal. This way the carrier is not subject to the Doppler shift.

Bottom line... Like in the CVOR, the receiver sees the composite signal: A carrier AM modulated with a 30 Hz (which is the reference instead of the variable signal), with a subcarrier FM "modulated" as the result of the Doppler effect, at 30 Hz (the frequency of the scan, it now represents the variable signal instead of the reference) and with a swing not far from the expected 480 Hz.

Blending: If a pair of antennas were used one at a time, the number of measurable bearings would be equal to the number of antennas in the array (about 50). To create a more continuous scan (and therefore a larger number of measurable bearings), the antennas which precede and follow the main antenna are also fed by the subcarrier signal, but with a smaller power. This "blends" the transition from a scan position to the next one.

See also What causes the phase to change in a VOR? for a better explanation of the DVOR.

A TACAN is based on a stationary antenna plus a rotating parasitic system. The base antenna is vertical and common to the distance and bearing measurement instruments. 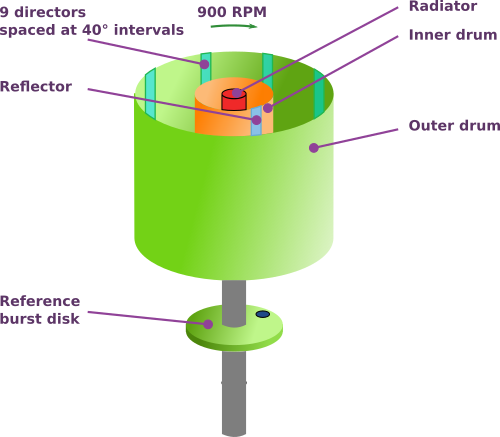 with an asymmetric duty cycle. 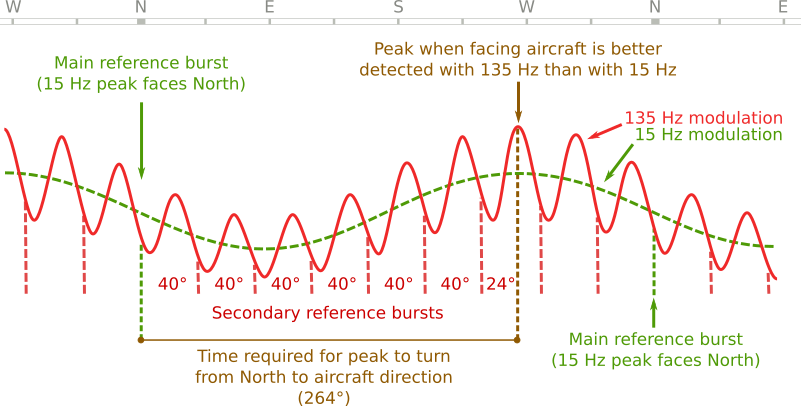 The DME principle is to measure the time a radio signal takes for a roundtrip to the ground station. As radio waves travel at light speed, knowing the time is knowing the distance. "The aircraft interrogates the ground transponder with a series of pulse-pairs (interrogations) and, after a precise time delay (typically 50 microseconds), the ground station replies with an identical sequence of pulse-pairs." (Wikipedia).

3
What is the primary means of IFR navigation for private pilots?
8
Is a VHF NAV receiver inherently capable of processing a LOC signal?
21
What is the difference between conventional VOR and Doppler VOR?
5
How to trigger warnings on an unplugged aural warning unit?
3
Are VOR frequencies static?
4
Is it legal to install a TACAN receiver on a civilian aircraft?
1
How do navigation displays depict turn anticipation?
2
Why are the VHF and UHF airbands directly adjacent to frequency bands used by vital radionavigation aids?