How long will one remain conscious in the event of a sudden cabin depressurization?

I know the usual scenario is where an airliner suffers from an explosive decompression and the oxygen masks drop and the plane descends to a safer altitude but.....

This is a purely hypothetical situation but if a passenger plane was cruising at 39000ft+ and it suffered a cabin leak that somehow went unnoticed by the crew and passengers and the oxygen masks didn't drop, how long roughly would it be before the passengers were incapacitated, and how long before the lack of oxygen became fatal.

The question you're asking roughly translates to What is the time of useful consciousness at 39,000 feet?. The answer is "About 15-20 seconds, once the pressure bleeds off." The FAA has a handy table for this: 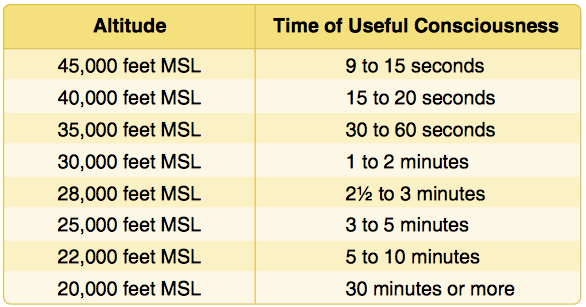 From Chapter 16 of the Pilot Handbook of Aeronautical Knowledge.
You can get a PDF of Chapter 16 here, or you can grab the whole thing from the FAA

The Time of Useful Consciousness will vary depending on personal physiological factors (e.g. if you're a smoker your blood doesn't oxygenate as well - you will probably have less time. If you're a mountain climber in excellent shape and used to breathing rarified air on your climbs you'll probably have a little more time).

In the case of a non-explosive decompression (say a pressurization system failure) you'll probably have more time than this from the start of the event to the point where everyone is unconscious: the cabin pressure will take time to bleed off. Whether that time is seconds or minutes depends on the nature of the leak.

Presumably while the pressure is bleeding off the aircraft's systems will complain about the loss of cabin pressure and give the pilots a chance to address the problem (fix the pressurization system or descend to a safe altitude). Unfortunately the effects of hypoxia can start setting in before the crew realizes what's going on (which is one of the contributing factors in the loss of Helios Flight 522, which suffered just this kind of gradual depressurization).

36
Would failure to put on an oxygen mask during loss of cabin pressure result in death?
14
How long does it take for pilots to become unconscious after an uncontrolled depressurization at FL 340?
15
What can I do to save my life if oxygen masks fail to drop down? Is it possible?
9
Cabin crew : how do they get Oxygen in the event of decompression?

14
Should depressurization be considered in the event of an inflight cabin fire?
7
What can ground personnel do in the event of in-flight depressurization?
8
Why do pilots' masks have more oxygen?
15
How fast does cabin air pressure leak after a total engine failure?
7
Have any commercial airline passengers ever been injured from hypoxia due to a depressurization event?
9
Was the safe landing of Southwest flight 1380 extraordinary or expected?
13
Is if safe/legal for an aircraft to return to cruising altitude after passenger oxygen masks have been deployed?