When to slow down to Va for turbulence?

I'm trying to figure out when it is safe to continue at normal cruise speed and when I should slow down to avoid over-stressing the airframe due to turbulence. (of course I have asked instructors but I'd like to get some more opinions)

My aircraft has a maneuvering speed listed, Va, also listed as the turbulence penetration speed. When should I actually slow down to this speed (i.e. light, moderate, severe turbulence)? How long should such turbulence occur before I slow down (after a bump or two, when the turbulence is observed to be intermittent or continuous, should I slow down immediately)?

For the scope of this question I'm asking specifically about light single-engine general aviation aircraft that cruise around 140 kts. Va is 112 kias. I'd be interested in hearing about larger/smaller aircraft too though.

Answers from actual pilots with experience in this area, please (I would hope all pilots have some :-) ).

To help you understand this, I feel like we should discuss how Va is determined.

(1) 0.4 times the positive load factor for the normal utility and commuter categories; or

(2) 0.5 times the positive load factor for the acrobatic category.

(c) Maneuvering load factors lower than those specified in this section may be used if the airplane has design features that make it impossible to exceed these values in flight.

Based on that regulation, the light single-engine aircraft I've flown have a +3.8/-1.52 load factor limit in normal category loading. The aircraft is designed to structurally handle those load factors up to max gross weight.

A pilot could exceed those limits by making abrupt control inputs or "pulling G's" because by pitching up abruptly, for example, the pilot is increasing the angle of attack and accelerating the aircraft.

At speeds above Va, the wings are capable of producing enough force to damage the structure with positive or negative loading.

This is a V-G diagram (Source) 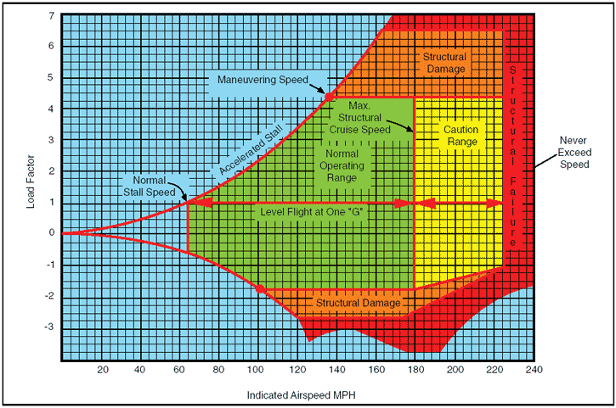 The curved line represents the load factor at which the aircraft will stall at a given indicated airspeed.

Va is the speed at which the aircraft would reach its maximum positive load factor limit at the same time it would experience an aerodynamic stall.

Maneuvering speed, as you can see by the chart, has no safety buffer above it, which is why Dave's answer has some details about inadvertently increasing speed.

Flying below maneuvering speed would be a better guideline to follow if you feel that there is are hazardous levels of turbulence.

Let's say you are flying well below Va, and you are hit by a strong vertical gust. The vertical, upward, gust will increase the angle of attack by momentarily changing the relative wind, and therefore increase lift. If that change in angle of attack exceeds the critical angle of attack, then the aircraft will aerodynamically stall rather than continue to produce greater lift. In that case, the stalled condition would protect the structure of the aircraft by acting as a limit on structure loading.

Now to answer your specific question:

It is unlikely that severe turbulence will come as a surprise during flight in a small single-engine aircraft. I have never personally experienced turbulence where I felt the need to decrease my speed.

It is a judgement call that needs to be made by the PIC, and I would slow down whenever I am experiencing consistent turbulence that is causing me to physically perceive unusually high G-forces.

If a pilot is in that scenario, there has likely been a poor go/no go decision regarding the flight. If you need a quantifier, "severe turbulence" would be the classification for which this matters.

I have experienced moderate to severe turbulence in flight, but those were attitude altering gusts; the load factors imposed were not near limits.

If the load factor from the next vertical gust is likely to exceed the maximum load factor of your aircraft it is time to slow down. Now you might wonder how to know the strength of the next gust. If flying in gusty air is really uncomfortable, better slow down. It's not that you are about to break the aircraft, but being kicked about in the cockpit will severely restrict your flying skills. Flying more slowly is safer because you stay in control. Lower speed will increase the angle of attack change from the gust, but the lower dynamic pressure will reduce overall loads. Also, the lower speed translates into a less steep gust load onset ramp, which also makes flying at lower speed more comfortable.

Regarding the duration: Slow down immediately if only one gust feels like it exceeds your maximum load factor. Yes, there is a structural safety limit of 50%, and it will take thousands of gusts at the rated limit load to exceed the fatigue limit, but with gusts I recommend to play it safe. Note that the increase in safety comes mainly from avoiding piloting errors.

My worst experience was in a Katana over the Arkansas River valley. Coming from Oklahoma, the cloud cover under me increased and I was forced to continue below the clouds, flying VFR only. Below the clouds I was literally thrown around by the worst gusts I have ever experienced. To make the experience tolerable I flew more slowly than usual, but not much - I wanted not to stay too long in this kind of weather.

Gerhard Waibel once told me he was invited to fly with Karl Striedieck along the Appalachians. Now you need to know that both flew an ASW-20, a glider which Gerhard had designed. And he knows that he built in reserves! Karl's style of flying was repeatedly overloading the airframe beyond the design limit, but he never slowed down. Gerhard, certainly no wussy, said that he was seriously concerned that Karl would break the airplane, but he never did. He will turn 80 next year.

As with anything you should refer to your POH for the specific aircraft as it often covers what you should do in this very case.

For example the POH for the Piper Saratoga states

In keeping with good operating practice used in all aircraft it is recommended that wen turbulent air is encountered or expected, the airspeed is reduced to maneuvering speed to reduce the structural loads caused by gusts and to allow for inadvertent speed build-ups which may occur as a result of turbulence or of distractions caused by the conditions.

Of course this is not terribly specific as to what turbulence is but its safe to say that if you feel you are going to be thrown around to the point you will begin to see speed build ups as a result of the conditions you should reduce your speed to Va.

Cessna seems to base it on load while Piper just advises a slow down to Va which is interesting.

You should also not be in the yellow arc (what ever it may be) in rough air, that is the "smooth air operating range" or "caution range". Basically the advised "slow down" is to give you a buffer area so you can inadvertently speed up and not enter the caution area or come close to Vne.

As for how much, I would say you should slow down in consistent turbulence. A single bump may just be you catching a thermal or crossing a mountain ridge etc. Turbulent air tends to persist the bumps as you move through it in which case I would slow down.

Speaking from personal experience I generally reduce speed when the ride gets "choppy" (its hard to say objectively what that is). This is somewhat a personal preference as well as for safety. The interesting thing to note is that when doing approaches in gusty conditions you may want to add speed to your approach speed.

Not the answer you're looking for? Browse other questions tagged airspeed turbulence or ask your own question.

12
Why does maneuvering speed vary with weight?
7
How to handle vacuum and turn coordinator failure in IMC?
8
Do glider pilots have to wear parachute in countries where mandatory even if flying with a foreign glider?