Could an EFB-based pre-flight check be automated?

Since an electronic flight bag (EFB) is basically an iPad with the right app installed, is it possible that some sort of plane-tablet connection could be formed (either wireless or wired) to automate all of most of an EFB pre-flight check? Or does aviation regulation not allow this?

This is a purely hypothetical question since I don't think any EFB app so far supports this, let alone any plane.

Clarification: I'm talking about the preflight checks that ensure that everything in the cockpit is set up correctly for takeoff. I understand that an EFB is an electronic version of the 40 pounds of paper a pilot usually needs in the cockpit. Can this preflight check be done on the EFB? And can this be automated?

An EFB could not be used for this purpose, all your suggestion would do is replicate things that are already done by EICAS (engine indication and crew alert system). The reason for this is that "receiving", "pre-flight" and "before takeoff" checklists all involve physically moving switches. The EFB would be unable to perform these actions (e.g. an EFB cannot select flaps 9 degrees).

What an EFB could do, if tied into the aircraft ARINC data bus, is to verify things. Such an EFB could verify that flaps are indicating a set position and could alert us if it were not. However, as mentioned, the EICAS already does this, and if I were to advance a thrust lever beyond taxi power I would get a master warning and a takeoff configuration EICAS message as well as an aural warning "TAKEOFF FLAPS" (EMB-145).

You also mention the bulk of paper carried as a reason for this, but this is not relevant to the checklists. The checklist on many large airplanes is a single sheet of paper, laminated and installed in the airplane. Some airplanes may have a few sheets, but overall checklists account for very little paperwork and they belong to the airplane, not the pilots.

Where EFBs do help with paperwork are the approach charts, which account for 75% of what I carried on any given flight. Three 2" binders, full of nothing but approach plates. An EFB can condense that down to a tablet, and this is where the value of the EFB is.

I'm talking about the preflight checks that ensure that everything in the cockpit is setup correctly for takeoff. … Can this preflight check be done on the EFB? and can this be automated?

Yes, and No -- You can certainly have a checklist on an EFB and complete it electronically (ticking each box as you verify the task was performed), but the actual performing of the tasks is still a manual process (it has to be, even with a "Class 3 EFB" built into the aircraft: If the computer is "performing" the tasks you've verified that the computer can do them - you still have to verify that the pilot's controls all operate correctly). 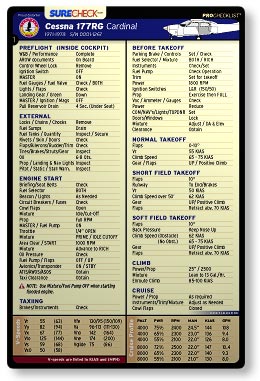 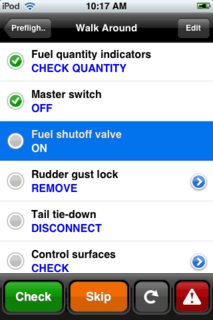 The electronic checklist is nice because it can be much more detailed (you're not limited by the size of a physical piece of paper), and you're less likely to lose your place in the list if you're going through the items as a "do-list" (rather than using it to "check" that you performed all the steps).

Not the answer you're looking for? Browse other questions tagged preflight efb or ask your own question.

19
Should a pre-flight inspection spot snakes on a plane?
3
Before a flight, what are the most important things to check in an aircraft (walkaround)?
22
What scientific evidence is there about the effectiveness of pre-flight walk-arounds?
5
Is Electronic Flight Bag(EFB) any different from our day-to-day tablet?
15
How does one test a stall warning during pre-flight?
28
Do pilots of airliners and jumbos do a walk around preflight check for every flight?
1
Difference between general visual inspection and pre-flight check inspection
3
Could a pilot be in violation of an FAA rule for the use of an EFB solely as an aid to situational awareness?