What is the most accurate geometric plane for referencing terrestrial flight attitude?

I have found various definitions for attitude.

What is the correct reference plane for flight attitude in regards to terrestrial aerodynamic flight?

Instead, horizon is defined in terms of horizontal, the plane orthogonal to the weight vector (and tangent to the Geoid, the ‘idealized’ sea level).

² There are some exceptions that do normally fly slightly nose-down, like B-52, which does it because its unusual gear does not allow it to rotate on take-off, or DHC-6 Twin Otter, which apparently does it to provide better view during slow short take-offs and landings.

The most general thing to say would be something along the lines of,

An object's angles in pitch, roll and yaw from a set of chosen zero planes

It boils down to what you want to use as your point(s) of reference. Attitude indicators use the horizon and if you really want to talk about it even space ships have gimbals that measure attitude relative to a plane. Your definition assumes only attitudes of aircraft flying over the earth (using the surface as a reference plane) which is valid for most cases but not all.

Furthermore, attitude indicators are referenced to the horizon because it is an easy to find and generally a universal level plane with respect to the Earth's surface. In aircraft flight we care about the Earth's surface because that is where we want to get back to and subsequently not smack into in the process, so its convenient to reference to its plane. Furthermore at high altitudes the horizon is still the horizon; it simply becomes a space/Earth horizon as opposed to a sky/ground horizon.

Here is the view out of the SR-71's cockpit (@73,000ft, this is also the highest-flying non-experimental plane ever made) to illustrate the point. 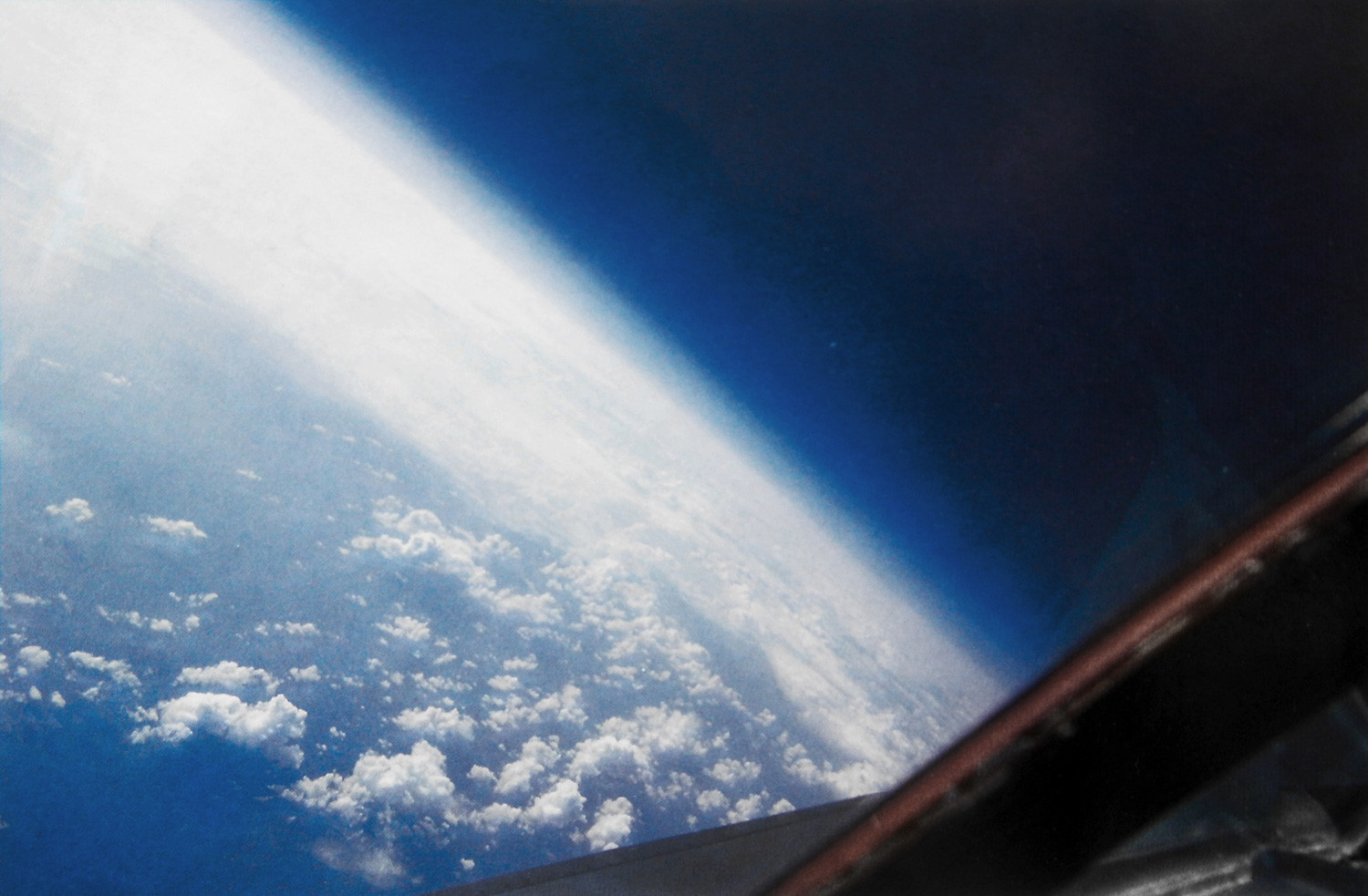 To extend the frame of reference explanation, we can look at the Apollo rockets FDAI, which is a nice example of a 3-axis attitude indicator that was referenced to multiple planes instead of a single horizon. In this case the flight attitude was simply the angle from a chosen set of zero planes.

The first one is called "Inertial Stellar". That means that the reference is a 3D system of coordinates which is fix relative to the stars. That does not mean that there's only one system of reference. In fact, there is a system of reference for almost every phase of the mission. Some are reused during the flight and. in order to be accessed multiple times, they are stored in the computer as "REFSMMAT", which stands for REference For Stable Member Matrix.

Since the root question has changed somewhat ill add to my answer. Generally speaking airplanes are oriented to the gravitational force below which is taken to be the "vertical". The vertical is often taken to be the tangent of the ground beneath it but since the ground may also not be level this is a generalization. There is a bit of real world discussion involved here since attitude indicators, the point of reference for an aircrafts attitude may not always be perfectly level to the ground. A pilot is mainly concerned with setting his 0 degree point with a pitch that will yield flight that does not increase or decrease in altitude. This is called "straight and level flight". In reality, due to the design of aircrafts this may in fact be a few degrees of pitch away from true 0 on the reference plane. Power settings will also effect this angle.

Not the answer you're looking for? Browse other questions tagged flight-instruments terminology or ask your own question.

5
Why is pitch measured with respect to the horizon and not the ground?