What makes the swooping noise when a jet flies overhead?

I've lived near several airports and have grown accustomed to a certain noise a jet plane makes when passing overhead: a swooping sound, very bass-heavy, that dives rapidly in pitch, maybe 1.5 seconds in duration. It happens toward the very beginning of the plane's audibility and is followed by the normal sound of the jet passing above.

Is it simply the Doppler effect as the plane passes overhead and its noise rapidly changes?

Or is there a mechanism on the airframe whose actuation on an approach might make this sound? Sometimes the same plane makes this sound more than once, which makes me think it isn't simply the Doppler effect.

The effect you noticed is the result of the combination of Doppler effect and sound absorption.

Sound absorption in a fluid is proportional to

where $\alpha$ is a dimensional constant, $x$ is the traveled path, and $\nu$ is the sound frequency.

In its own reference frame, the airplane emits always the same sound, irrespective of whether it is approaching or receding from the observer. But for the observer, the frequency of a wave (which is $\nu_0$ in the plane frame) seems $\nu_a = \frac{\nu_0}{(1-v_j/c_s)}$ when the airplane is approaching, and $\nu_r = \frac{\nu_0}{(1+v_j/c_s)}$ when the plane is receding (here $c_s$ is the sound speed and $v_j$ the airplane's speed). Thus the perceived frequency jumps by a factor

This means that the absorption coefficient, at the time when the airplane is passing overhead (thus $x \approx H$, the plane's height over the ground), jumps from

For typical values for the atmosphere, and the propagation of sound waves in it, this means that $D_a \ll 1$, while $D_r \approx 1$.

Hence, what is happening is that, as the airplane passes roughly overhead, the sound goes from being deeply absorbed, especially at high frequencies, to not being absorbed at all (its normal sound, as you call it). The strange sound you noticed is what you perceive as the lower frequencies are becoming less and less absorbed, and thus the sound spectrum changes.

after I wrote my reply, DClayton (in a comment above) gave a very important hint that this is exactly what is happening when he noticed that the same effect appears with gliders, hence it is unrelated to engine sounds (I ignored this, thanks).

it is also worthwhile remarking what happens for high-altitude planes, when observed from the ground: in that case, the traveled distance $x$ is sufficiently large that all frequencies audible to human ears are absorbed, so that the plane goes from being nearly silent when it is approaching to being very clearly noticeable as it is receding.

You may try this on a clear day with high humidity at high altitudes, when over-flying jets leave white wakes: you will be unable to hear them as they approach (even though you can see them thanks to the presence of the white wake), but you can easily hear them as they go away, but just keep in mind that all of this is delayed by the (substantial) time it takes for sound to reach the ground, which, for 33,0000 feet or more, is of order 30 seconds. In other words, you will hear the noise level grow perceptibly about 30 seconds after the jet has passed the point closest to the observer, i.e. 30 seconds after flying directly overhead.

There are at least three effects that can cause this

When a source of noise moves to you, you'll hear the noise with higher pitch, and when the source moves away, you'll hear it with lower pitch. This can be described by this formula, which gives the ratio of frequencies head by you and sent by the source of the noise moving with speed $v$, at speed of sound $c$:

Since aircraft pass by in some distance, you can't just enter the speed of the aircraft, but this:

I plotted this for two different speeds and several altitudes, and put the time until passing you on the x-axis: 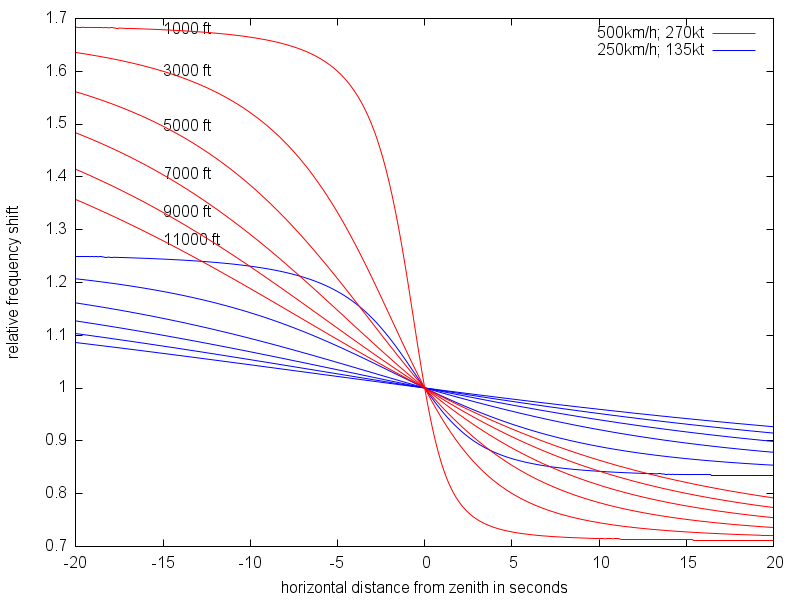 This shows that the total shift in frequency is larger for higher speeds and that the time the sweep takes is shorter, the nearer the aircraft passes by. BUT an airliner will not fly at 1000ft with 270kt, its more 135kt.

In general, the aircraft has to fly at really low altitude to cause a noticeable doppler effect. Here is a youtube video of a landing A320, recorded near the runway.

I didn't take into account other effects like that speed of sound changes with altitude. Also Marius Matutiae meanwhile wrote something about absorption of sound in air.

Something you can observe in that youtube video, too, is that you can clearly hear a high, screaming noise from the fans in the beginning, which changes to a dumb rumbling from the jet blast after it passed by.

Most aircraft make some noise when deploying flaps, and I would say, the Avro RJ100 is one of the loudest airliners concerning this. The reverse effect can be heard when retracting the flaps, also from inside the aircraft (2:40)

Not the answer you're looking for? Browse other questions tagged commercial-aviation jet-engine approach or ask your own question.

18
When a typical commercial airliner flies overhead, what is the actual noise we are hearing?
12
What causes the distinct sounds of a jet engine?
1
How does engine noise change during descent / approach?
1
How does altitude affect sound?
0
Odd whining sound from planes passing over

19
What makes intentional low or missed approaches legal?
29
How to join a traffic pattern when passing overhead?
4
When were the first jet engines used?
14
What happens to the fuel lines when a jet engine falls off?
8
Why do I hear the "real" engine noise only when the plane is on the runway?
30
What makes a smokeless jet engine?
6
What causes noise when a plane is on the ground?
9
What do the various lights in the overhead aisle light cluster of a Bombardier Q400 NextGen represent?
0
What makes airplanes pitch up during landing?
7
What causes the horn-like noise during the start-up of some jet engines?