Why does this shockwave not touch the body that creates it? 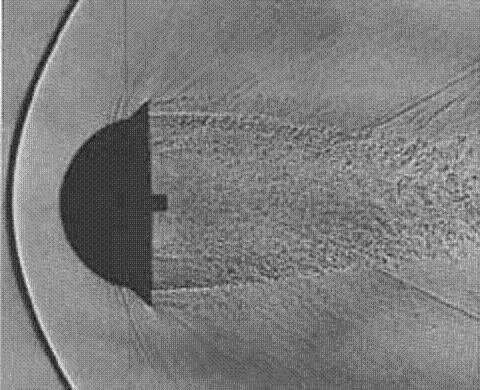 Why the wavefront is in front of the object? It does not assume that if the object travels faster than the speed of sound wave front should be just touching the object that causes it ?

fluid-mechanics shock-waves
Share
Improve this question
edited May 9 '16 at 10:54

After passing through the shock wave, the air still has to evade the body. If the shock-wave touched the body, the air would have to escape through infinitely thin space at infinitely high pressure and it obviously can't do that.

So behind the shockwave there is a boundary layer (called shock layer) in which the air is moving with the body and flows, under high pressure, to the sides where it can escape.

The blunter the body, the thicker the boundary layer, because the air must cover longer distance to the sides and takes longer to do that.

Of course the high pressure between the shock and the body causes a lot of drag, which is why sharp nose and leading edges are preferred for supersonic flight.

In case of an infinestimally thin body in supersonic flow, the disturbances created propogate as Mach waves. However, as the the thickness of the body increases, the flow has to physically turn away from the object after the shock wave.

For example, if a wedge at an angle $\theta$ is placed in supersonic flow, the fluid has to turn by that angle after passing through the compression shock (so that the flow is along the body).

Perhaps, at the root of your question, there is a misunderstanding of the nature of a shock wave. A shock wave is a surface, an ensemble of points, where the properties of the gas change discontinuously (it is not the only surface with this characteristic, but the other class, that of contact discontinuities is absolutely unstable, and quickly disappears).

Thus a shock wave has gas on both sides of it, by definition. Hence, it cannot touch the object, because there must be another layer of gas between the object and the shock wave.

Are there surfaces where matter does not cross a surface of discontinuity? Yes, there are, and they are called contact discontinuities, which, being absolutely unstable (the term absolutely has a very special meaning in fluidodynamics), quickly disappear.

The second part of your question,

It does not assume that if the object travels faster than the speed of sound wave front should be just touching the object that causes it ?

seems to indicate that you are thinking of a shock wave as a regular wave, hence the blunt object should catch up with it. Unfortunately, calling a shock wave a wave is a historical relic, which betrays the fact that shock waves move supersonically with respect ot the fluid in which they propagate. In fact, there can be no shock wave which moves sonically or slower, lest the second principle of thermodynamics be violated (Landau and Lifshitz's Fluid Mechanics volume has a beautiful proof of this theorem, in full generality).

The truly cute feature of the picture above is the well-defined turbulent region in the object's wake...

As per mins' request (see below), you can see it as follows.

The speed of sound arises when you consider the fate of small perturbations. Imagine for instance that you locally compress matter a tiny little bit, i.e. you increase the density from $\rho$ to $\rho + \delta\!\rho$. In fluids, a higher density of a given fluid (= a smaller occupied volume) induces an extra pressure, so that, locally, $p\rightarrow p + \delta\!p$. So now you have a small volume whose pressure exceeds that of the surrounding medium: what happens? It obviously expands, i.e. pushes away nearby matter in order to claim for itself the volume occupied by the surrounding medium. Hence, a small increase in local density results in nearby matter having to move away, dislodged by the extra-density volume.

At first sight, one might think that this chain of dislodging events goes only as fast as each parcel of fluid, which is very slow as we said above, but this is not the case. The reason is that what we are asking is not the speed at which is parcel of fluid is moving (slow, as stated above), but how long it takes for the $N$-th generation dislodging to begin, not to complete. The speed of sound identifies the moment when the $N$-th generation dislodging begins, not ends, it identifies when the first perturbation arrives, not when it completes.

This speed is much larger than the speed at which individual parcels move. When we have compressed the initial parcel, we have also heated it (compression leads to heating, in normal materials), hence the average molecule will have a higher-than-before temperature $T+\delta\!T$. As you clearly know, a molecule coming from a warmer region is slightly faster (in the average) than one from a colder region because $v \approx \sqrt{kT/m}$, so that the first generation dislodged material will first notice that it has a warmer (=greater pressure) neighbor when it is first reached by its hotter-than-average molecules, which travel at speed $\approx \sqrt{kT/m}$. Thus the speed with which the message Slide over, you wimp travels is the same as that of the molecules from the warmer surroundings.

These hotter-than-average molecules from the hotter surrounding collide with the average local molecules, and transfer to them a bit of their extra energy, i.e. local molecules are heated by the collisions from the original place of compression. Now these newly heated molecules will move out to the region of the 2-nd generation dislodged gas, and repeat the process again: the speed with which the signal travels, i.e. the first perception that the local gas must start moving, is again (actually, always) that of the molecules, $\approx \sqrt{kT/m}$. Hence the sound of speed is $c_s \approx \sqrt{kT/m}$.

In the derivation above I have skipped some details, whose inclusion however only modifies $c_s$ to the extent of replacing the previous formula with $c_s = \sqrt{5 kT/2m}$. The real detail I left out is that, once compression occurs, in real fluids this does not necessarily lead to the maximum heating possible (which leads to the factor $5/2$ above), but it can be lower than that because some of the extra heat may be dissipated away before the warmer-than-their-surrounding molecules have managed to reach their surroundings. If heat is dissipated (via viscosity, radiation, whatever) then it takes longer for the first-generation fluid to realize that the initial parcel of fluid has been compressed, because fewer of the molecules arriving to it are warmer than its own molecules.

Not the answer you're looking for? Browse other questions tagged fluid-mechanics shock-waves or ask your own question.

12
Can a supersonic plane use a subsonic wing if the nosecone shock produces subsonic airflow around the wing?
6
What would the density profile of this shock wave look like, roughly?
39
How is it possible for supersonic aircraft to push air out of the way?
3
Does shrouding a propeller minimize induced drag by equalizing the downwash velocity along its blades?
5
How does a weak shock-wave boundary-layer interaction create wave drag (other than through direct shock losses)?
6
Why does the temperature rise in the boundary layer after a shock wave?
0
How to identify shock waves and expansion waves on a representation of the mach number?
1
Why doesn't a wing in supersonic flow produce a shock that results in flow parallel to the leading edge?
1
In wind tunnel testing "same Mach number" is not "same airspeed"?