Compressor-Turbine: Why a shaft and not kind of a "rotating drum"?

I'm studying the fundamentals of jet propulsion and its applications. I really have this next question and haven't found an answer yet: why do jets use a shaft (or more) to connect the turbine(s) to the compressor device(s), but not a "rotating drum" instead?

What I call a "rotating drum" (I sketched it below) is a thin, rotating cylinder that has built-in rotor blades at the beginning and exit.

I'd like to know if this is a feasible arrangement, and what would be the disadvantages of it. I think this might be unfeasible because:

But if we were to overcome this drawback somehow, I think we would benefit in the following ways:

I don't know how correct/wrong I am. This is a question out of pure curiosity and I wanted to get some feedback on it. Should I go ahead and start working on a small scale prototype of it? Hope my question here is not too basic.

PS: The sketch I made is just that: a sketch. Therefore, important things like the relative number of stages compressor-turbine, or the increasing/decreasing areas for each of those two components, do not appear.

jet-engine turbine compressor
Share
Improve this question
asked May 7, 2016 at 16:53

There are a few very practical reasons why turbine engines use inner shafts/spools. 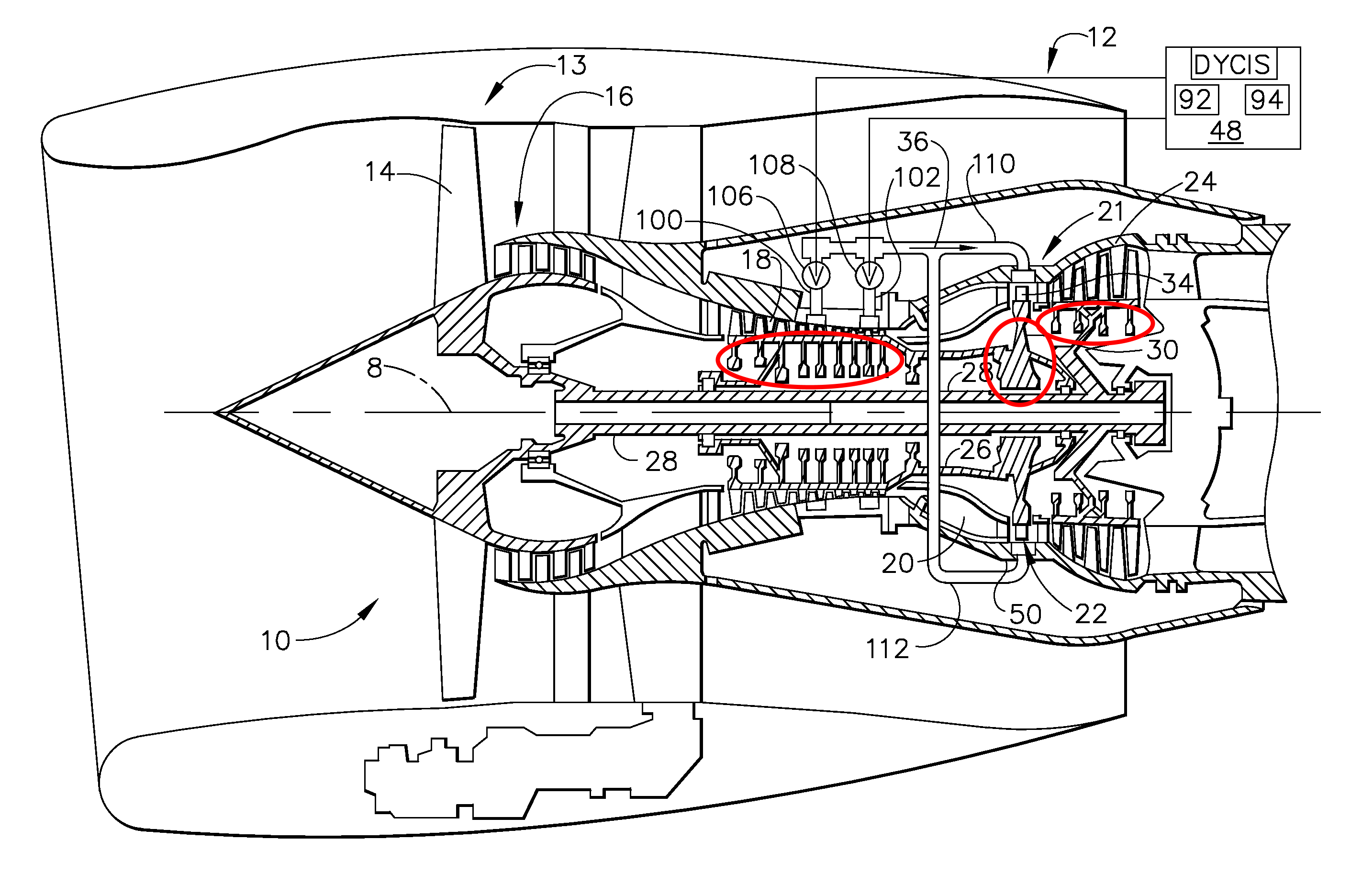 Next, you want the bearings to be as small as possible. This is because as the radius of a bearing increases the linear velocity of it also increases, via this equation: $v=\omega r$. The faster the linear velocity the higher the wear, the greater the friction and greater the heat generation. So there is a push to make the bearings as small as possible given other constraints. In the image below I have circled the bearings, the red circles are on the low pressure spool bearings, while the blue circles are the high pressure spool bearings. This isn't always done, but it is becoming very common for the aft high pressure bearing to actual ride on the low pressure shaft. Typically these shafts spin in the same direction, so the bearing speed is reduced by this equation $\omega_{AftHPbearing}=\omega_{HP}-\omega_{LP}$. Bearing friction reduces the efficiency of the engine, and bearing wear is a significant maintenance driver. 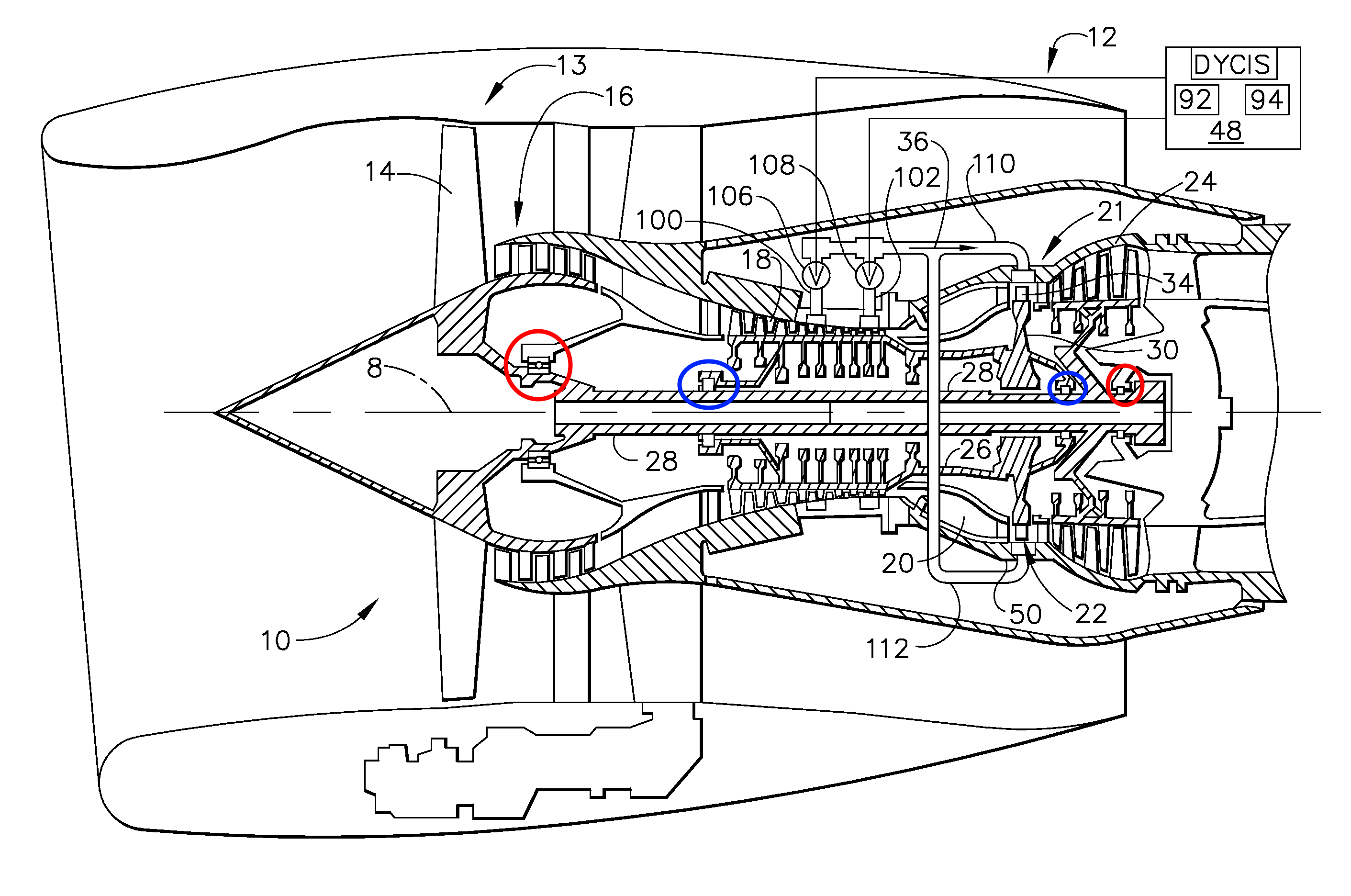 (This is getting long so I am going to truncate the rest) There would be many other issues as well, such of blade mounting (dovetails in compression instead of tension), blade design (compression instead of tension), possible increase in leakage paths, containment, stator structure design (now all of your stators are attached to a stationary shaft that can only be supported at the ends), control of variable stator vanes, getting the fuel into the combustor, how do mount the engine, etc.

Edit: Just reread the question and realized you were also talking about making the combustor bigger. Modern combustors are getting smaller and are much smaller than they were in the original jet engines. You can also see in the pictures above, they already don't use all of the space available to them and if they needed more space the arm (shaft) connecting the HPT and HPC could be lowered some more.

A rotating drum will have a higher inertia. When the pilot commands a thrust increase, spooling up the drum will take longer than spooling up a shaft. Also, a big drum is harder to balance well than a thin shaft.

However, what you propose is not so far from general practice: The high pressure spool on modern engines is quite big already, but it is still on the inside of the blades. See the cut-away picture of the General Electric Passport engine for example (source): 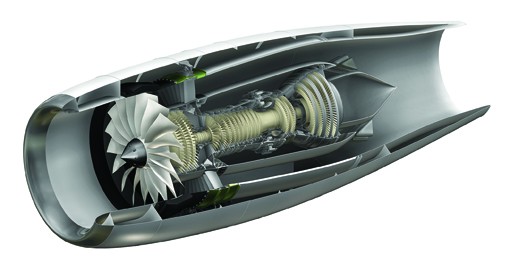 You seem to be describing an Exoskeletal Turbine design. I'm no expert, only vaguely associated with the industry. They're attractive in part because your rotor materials only need to be strong in compression, so you can use e.g. ceramics. Further, the hollow inner volume can be reused for an alternative flow-path or engine type, which opens up options for sc/ramjet options with a conventional turbofan wrapped around it. NASA's investigated it, with major findings that the bearings technology didn't exist at the time and that support equipment would likely eat up any advantage gained, for roughly equivalent performance. Materials improvements may shift the balance either way.

30
In a turbofan what holds the spinning axis?
8
How is the central hub / shaft casing of a two-spool jet engine assembled?

2
What is qualitative relationship between surge line, stage characteristic and throttle characteristic?
5
What are the limitations of using a single shaft between the compressor and turbine in a jet engine?
17
Is it possible to drive a prop directly from a jet engine without a gearbox?
8
How is the central hub / shaft casing of a two-spool jet engine assembled?
5
What is the equation for the energy balance between turbine, compressor and propeller?
6
Why a higher compressor pressure ratio results in higher Thrust and lower TSFC?
10
Why do many large turbofans have a gap (of turbine blades) between the LP turbine and HP turbine?
9
How does the FADEC prevent compressor stall during rapidly increasing thrust demand?
1
Do turbine and compressor rotate in opposite direction?
3
Are there Hybrid Electric-Combustion Turbine Engines where only the compressor is electric driven?