As far as static thrust, does a shrouded/ducted propeller outperform an un-shrouded propeller? It seems that the guide blades on the bottom of the duct would allow little more thrust to be extracted from the vortex the prop generates by redirecting the air flow. Also the duct seems like it could "focus" the propelled air (like a rocket thruster) resulting in better thrust. 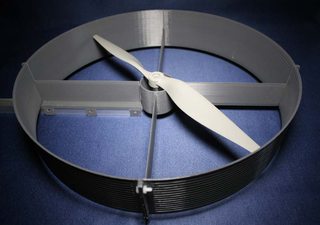 Of course I can see how an improperly implemented duct could really kill efficiency (creating more interference and turbulence), but what about a well designed one? And if they are better, why wouldn't we seem most propeller aircraft use them (what is the advantage about not having the duct)?

there is a lot going on here. Short answer is that a ducted fan (what you have pictured) can produce a lot more thrust (experiments from one paper say twice as much) than an open rotor of the same size. The big thing that these ducted fans have going for them is the fact that tip losses become negligible because there simply isn't room for the tip vortex to develop because there is a duct in the way! Simple, easy solution that works well.

However, nothing comes for free. One, you have to have the duct there, which is weight & money (you have to build the duct and the support structure, which adds some drag too). Think of scale too--as propellers get larger, the duct has to grow with them. Imagine the difficulties in putting a 20' duct on a B-36 propeller!

Second, the manufacturing tolerances on the duct are critical--the tighter it is, the more efficient you are (to a limit, naturally)...but the tighter it is, the more susceptible you are to having your blades strike the duct due to flexing of the duct or the blades. And, speaking of flexing blades and the necessary support structure you'd need, this could make pitch control (on a propeller, variable pitch, and on a rotor, cyclic and collective) difficult to implement, depending on which of those schemes you're looking to do. Then again, for a small implementation using RPM control...maybe you don't need those anyhow.

Similarly, while a crosswind on an open rotor leads to a sudden decrease in power, a crosswind on a ducted fan leads to a sudden pitching moment due to the lip of the duct and the asymmetric inflow to the fan (which, since you're now producing more thrust to begin with, asymmetric inflow effects become even more pronounced). Now, if you stick this on the front of a typical Cessna 172, say, and throw a crosswind at it (which, if you think of takeoffs and landings, which since they must be in a certain direction, having a crosswind is actually quite likely) imagine the yawing moments that would be induced by the propeller (proportional to the static thrust) -- even before the aircraft got off the ground and before you have a lot of control authority to counteract it! A similar scenario in the air could be as dramatic. And, yeah, you could throw some guide vanes at it to help, but nothing comes for free. Guide vanes, which is a workable solution, now mean that you need to have actuator(s) for those vanes, power & maybe hydraulics for the actuator(s), mounts for the actuators, hinges for the vanes, linkages from the actuator(s) to the vanes, redundancy for the actuation or some means of facilitating control in an emergency...it's a lot of work. Or, by contrast, you could just bolt a fixed pitch prop on a shaft at the front of said Cessna 172 and call it a day.

In the long run, and this is some speculation, I think it just leads to a more complex system, particularly in full-size implementations, which is a maintenance, cost, and manufacturing headache that isn't worth having if you can get plenty of performance from a regular open propeller. If you venture into the world of diffuser augmented wind turbines, there have been similar debates going on for decades...and a ducted wind turbine has yet to be successful on the large scale. Similarly, while ducted fan aircraft have flown... 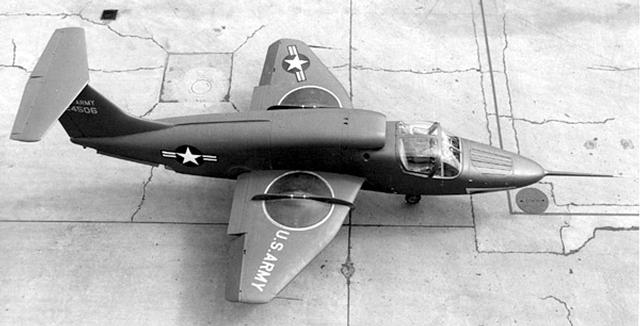 (Ryan XV-5A Vertifan, circa 1950. The ducted fans are underneath the circular domes on the wings and another under the shuttered area on the nose for pitch control. Source: http://www.aero-web.org/specs/ryan/xv-5a.htm)

...there aren't any non-MAV examples around today that I know of.

Another thing to keep in mind is that ducted fans have much more than 2 blades. Increasing number of blades decreases the propeller/fan efficiency. The main advantage of increasing number of blades is to get higher thrust density, i.e., getting more thrust with the same propeller/fan diameter. So, what ducted fans really do is: the multi-bladed fan provide a lot of thrust density and the duct try to compensate the efficiency lost. Hopefully, the ducted fan can achieve the same efficiency of the 2-bladed propeller...

It's nonsense that ducted fans are more efficient. It always gets bandied around the internet as if it were the truth, but it simply isn't so. Ducted fans look cool and they make props look and sound like jets, so people WANT it to be true, but it doesn't make it so. Ducted fans have about 50-60% less static thrust than the same size prop if designed badly. If designed absolutely perfectly, they might have 90% of the efficiency of a prop. But that's in a static setting. In the air, where you have drag created by the duct and duct inlet, that gets even worse.

We have to stop perpetuating this myth. It hurst innovation.

Not the answer you're looking for? Browse other questions tagged propeller efficiency propulsion or ask your own question.

1
Will leaving the ducting on the propellers attached to a DIY aircraft give it more thrust?
26
Would connecting propeller blades with a continuous ring reduce induced drag?
16
What are the advantages and disadvantages of ducted fans in designs such as the Airbus E-Fan?
10
How much thrust is gained from placing a propeller in a duct?
7
Rings around propellers
3
Do ducted fans have a future in forward flight aircraft? Can they be made more efficient than open rotors?
3
Does shrouding a propeller minimize induced drag by equalizing the downwash velocity along its blades?
2
Where can I find info or techniques on calculating the influence of a duct on the thrust and efficiency of a propeller?
2
Are shrouds and stators needed to maximize thrust from stacked props and motors in electric aircraft like the Lilium Jet?
0
Is winglet height equivalent to duct height?
See more linked questions