What is a Visual Climb Over Airport (VCOA) and how is it properly executed?

The takeoff minimums and (obstacle) departure procedures for the Asheville Regional Airport (KAVL) have special instructions due to the rising terrain in the vicinity of the airport. Instrument departures have special procedures to follow when departing IFR.

There are special procedures for visual climb which mention VCOA. There is no mention of VCOA in the Instrument Flying Handbook. Where is VCOA explained and what are the special considerations for pilots conducting this procedure? 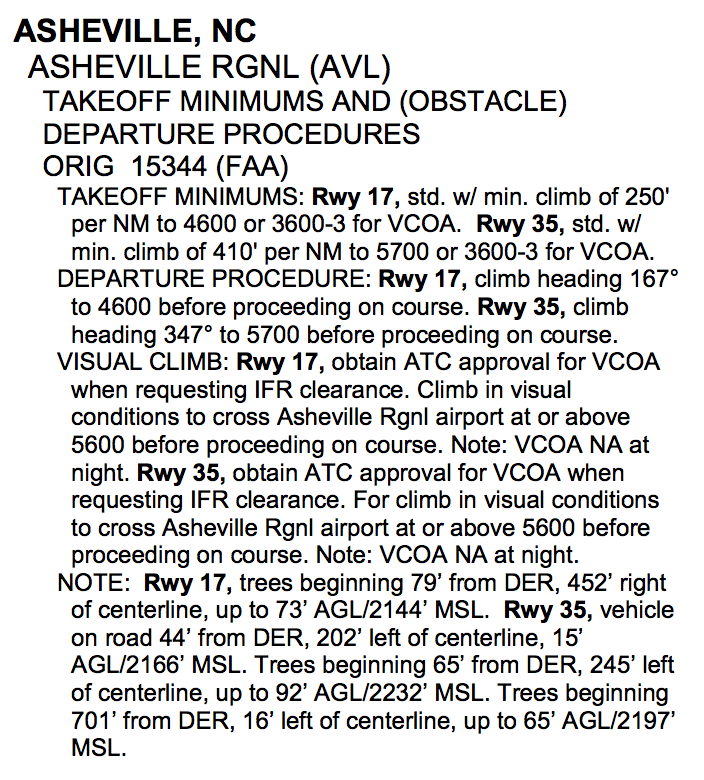 It's defined in the pilot/controller glossary:

VISUAL CLIMB OVER AIRPORT (VCOA)− A departure option for an IFR aircraft, operating in visual meteorological conditions equal to or greater than the specified visibility and ceiling, to visually conduct climbing turns over the airport to the published “climb−to” altitude from which to proceed with the instrument portion of the departure. VCOA procedures are developed to avoid obstacles greater than 3 statute miles from the departure end of the runway as an alternative to complying with climb gradients greater than 200 feet per nautical mile. These procedures are published in the ‘Take−Off Minimums and (Obstacle) Departure Procedures’ section of the Terminal Procedures Publications.

The AIM 5-2-8 says that pilots must request it:

Do not solicit use of the Visual Climb over Airport (VCOA) option.

The TERPS 14-4 has all the technical details and explains the purpose, which is to allow aircraft that can't maintain a 200fpnm climb to climb safely within a limited area over the airport:

VCOA is an alternative method for pilots to depart the airport where aircraft performance does not meet the specified climb gradient.

The departure designer creates a vertical cylinder (called a Visual Climb Area in the TERPS) of airspace over the airport that's safe to climb in, based on airport elevation, runway positions and a default airspeed of 250kt (although other airspeeds can be used). Even if the VCA dimensions aren't charted or stated in the DP, for an airport at 2000msl (KAVL is at 2162msl) the radius of the cylinder is at least 2nm at 90kts, or 2.8nm at 250kts, which seems to be plenty for a spiral climb (in the aircraft I fly, anyway). And the climb has to be in visual conditions, so terrain clearance shouldn't be an issue.

I don't know of any detailed guidance on how execute it, but "climbing turns over the airport" seems fairly clear. I've never done it myself, but I'd simply fly a continuous spiral climb after takeoff, up to the en route altitude mentioned in the procedures and go from there.

Not the answer you're looking for? Browse other questions tagged instrument-procedures or ask your own question.

14
Can I do a VFR climb-out on IFR flight plan?

12
How do you properly enter the NDB34 published approach at Friday Harbor (KFHR)?
9
What is the official FAA definition of the term enroute?
2
If you file a flightplan with “NO SID”, can you still get assigned a graphical ODP in your clearance?
0
What are early/inside and late/outside turns (see, e.g., PBN Manual Order 8260.58A) and when do pilots perform them?
4
When does the mandatory minimum climb gradient during an Instrument Departure Procedure end?
1
What are the implications of Visual Descent Angle Not Authorized (VDA NA)?
0
What is implied about altitude and the VDP by this Visual Flight Segment arrow in the profile view example in the Aeronautical Chart User's Guide?
2
How does one differentiate a “fly by” from a “fly over” waypoint?