How does lowering altitude conserve energy in Solar Impulse 2?

In this article the author explains that the aircraft flies at a lower altitude to conserve energy.

During the day, it climbs to its maximum cruising altitude of 8,500 metres to capture the most rays. To conserve energy, it works its way down to 1,500 metres in the evening, and stays there overnight.

How is this possible?

It makes sense that at night they would have to descend to a best endurance altitude to conserve battery power. 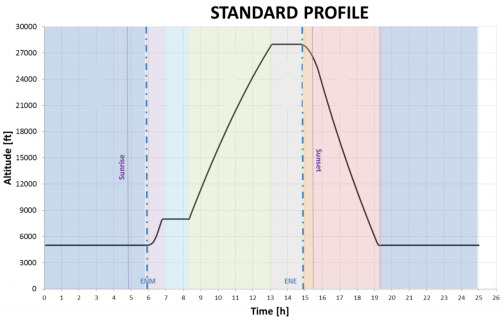 It is basically gliding at night. Not pure gliding but a powered glide - similar to what normal aircraft do on landing approach.

Of course, it has to be done properly since the aircraft has no way of generating power at night. This is why it can't be a pure glide - if it loses too much altitude it won't have enough charge left in the batteries to climb.

In effect, the aircraft uses altitude as a second type of "battery".

"Working down" conserves battery power, as the other answers suggest. But it is also better for endurance to descend, simply because the flight Reynolds number will be higher, and the viscous drag lower.

See this answer for an explanation how the physics behind this works.

Also, the optimum polar point for minimum energy loss of propeller-driven aircraft is at a high lift coefficient $c_{L_{opt}}$, and this lift coefficient goes up with the wing's aspect ratio $AR$.

At an aspect ratio of 20, this might be close to the airfoil's maximum lift coefficient, so flying slowly runs the risk of flying close to stall. Since the maximum lift coefficient goes up with the Reynolds number (after all, the viscous effects diminish and flow separation will be delayed), flying at a low altitude allows to make flying at the optimum polar point for minimum energy loss more safe or even possible.

Altitude is energy. A long shallow dive, from 8,500 to 1,500 meters, recaptures the energy that it cost to climb up during the day. It is completely analogous to charging the batteries with solar power during the day and drawing that energy out of the battery at night.

Not the answer you're looking for? Browse other questions tagged solar-impulse or ask your own question.

14
How are the glide polar and L/D ratio charts related?
11
What is the relation between an airplane's altitude and the drag it is experiencing?
4
What happens if Solar Impulse II encounters un-expected head wind and runs out of battery power?