Why aren't the canards used as airbrakes on the Tupolev Tu-144?

The Tupolev TU-144 uses retractable canards to stabilize the aircraft while starting and landing. On this picture you can see them very well: 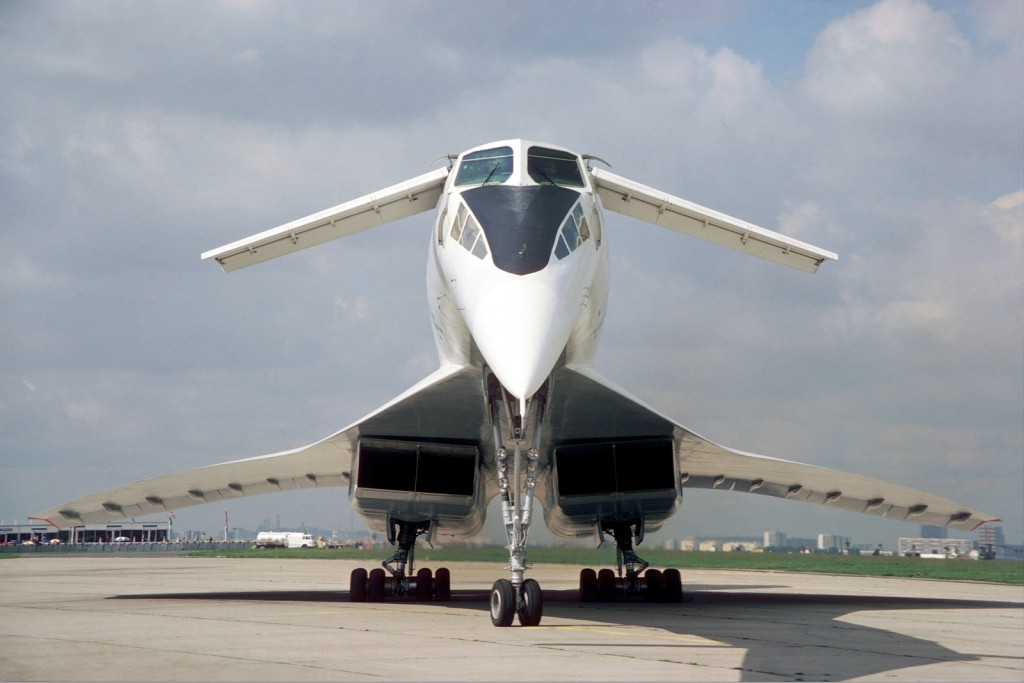 It doesn't have reverse thrust and air-brakes, and relies purely on very strong wheel brakes. Wouldn't it be possible to rotate the canards by 90° (after touchdown) in order to create a very large air-brake? I don't think it would need too many modifications to the current form of the canards.

A number of things happen when you rotate the canards by 90°, and in no way I see how these could be addressed by

not too many modifications

Once you land, you need a certain amount of time to rotate the canards. During this time the canards will not produce a perfectly horizontal force, but it will have also a vertical component. Whether this component will be upwards or downwards it will depend on the rotation direction: rotate them with the leading edge up, and you will have some upward force; downward otherwise.

In both cases this is not ideal:

Let's assume for a second that the transient problem can be avoided. Now you have two large surfaces perpendicular to the airflow that create a massive amount of drag. And torque.

You need then to design a structure that is capable of:

You can reduce the torque and drag forces to be transmitted through the mounting by delaying the deployment/rotation of the canards, but that would defeat the purpose or, at the very least, severely limit the usefulness of such a system.

In conclusion, a structure that would fulfill all the listed requirements is

making even less sense in an aviation application.

Would the stopping distance perhaps increase instead of decrease from using the canard as an air brake? My career involved stopping performance calculations for conventional airliners rather than delta wing configurations, but it seems that with existing landing technique you are getting a lot of drag benefit from the angle of attack of that big inefficient delta wing while the nose gear is still in the air. Maybe more drag than there is to be had from getting the nose on the ground relatively quickly so that a smallish canard can be rotated? To come out ahead, it might be necessary to have the canard air brake activate prior to nose gear touchdown. That would likely require automated real-time adjustment of the elevons to counteract the transitory moments, and perhaps a non-90 degree canard deployment angle during rollout to reduce the undesirable moment coming from a drag force well above the vertical CG.

Even if it happened to be the case that the canard was already capable of being rotated to any desired angle, given all of the above considerations something like slightly bigger drag chutes would presumably be a much easier way to get the same result.

Not the answer you're looking for? Browse other questions tagged supersonic braking canard tu-144 or ask your own question.

19
Why is the Tu-144 the only commercial airplane with canard configuration?
19
Why is it said that the Tupolev Tu-144 had superior aerodynamics to the Concorde?
47
How can the landing gear fit in the small room in the engine bay on the Tupolev Tu-144?
10
What are these unsymmetrical parts at the tail of the Tupolev TU-144?
2
Why didn’t the Concorde have flap-canards like the Tu-144?
10
Why do some canard aircraft have dihedral on their canards?
13
Was wood used in the construction of the TU-144?
4
Why were canards added to some variants of the Dassault Mirage III?