What is this tube connected to a 757 for?

In this photo, there is a 757 at Narita Airport with a tube connected to the belly. 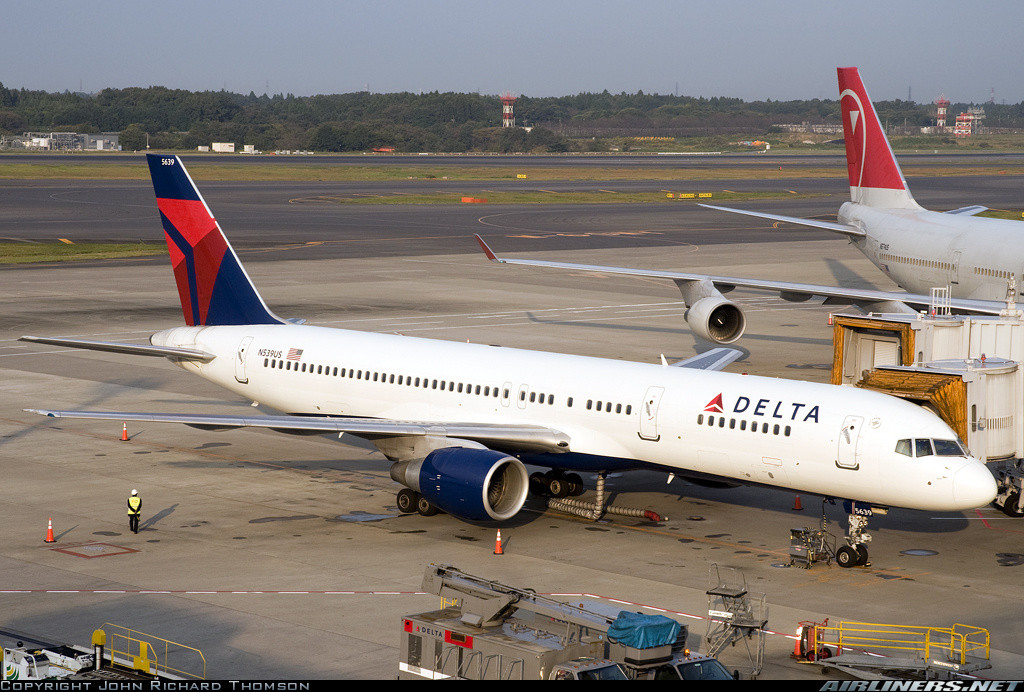 Source: Airliners.net
The tube is in the middle of the plane. There is a similar question about this tube, but here it seems to be connected to the ground and not to the jet bridge. Does anybody know something about this tube?

What Mike said is correct, but I thought I'd add a little more.

The hose is technically called the "PCA Hose" which stands for Pre-Conditioned Air Hose. The hose supplies pre-conditioned air to the aircraft from a ground based unit, that is typically electrically powered and is usually mounted on to each jetbridge. The air can be cold or hot, depending on the needs of the day. The aircraft has a connection that feeds directly into the aircraft's air distribution mix manifold, which is where recirculating air is mixed with fresh pack air before being sent back to the cabin. The ground port connector port has an exterior door and an internal check valve to prevent pressured air from escaping in flight (the 757 actually has two internal check valves that are in series).

When the pre-conditioned air is connected to the aircraft, a small amount of it is sent directly to the cockpit and is 100% fresh (at least on Boeing aircraft), while the remaining PCA air is sent to the mix manifold where it mixed with recirculated cabin air before being released into the cabin.

The main reason to use pre-conditioned air is that it allows the crew to shut off the APU (and air conditioning packs) at the gate, which reduces fuel burn, emissions, noise and maintenance cost. When fuel costs went up dramatically in the mid '00s, there was a major push at airlines to eliminate APU run times, because it is much cheaper to run a ground based, electric air conditioner than running the mini-jet engine to produce bleed air. At the same time, there was also a push to ensure that aircraft were connected to ground electrical power as well, for the same reason.

There are some downsides of using PCA air. First, the hoses get a ton of debris in them and the hoses themselves breakdown internally. All of this debris gets blown back into the aircraft and clogs up the ducts and gaspers. This drives a lot of extra maintenance cost on the air distribution system, which didn't used to require much maintenance. Screens help some, but don't fully fix the problem. Second, ground crew tend to always use the max flow setting on the ground unit, and this can over pressurize ducts on narrowbody aircraft, leading to their failure (especially when the ducts are clogged).

Third, many crews/airports think that on a "hot day" you still have to run the APU, this is false and actually counter productive the cold ground air blows directly on the mix manifold's temperature sensor, so the airplane thinks the air is too cold and starts adding "trim air" from the APU to heat up the mixed air. So running the APU actually makes the cabin hotter, but then the ground crew thinks "since the aircraft is hot with the ground air and APU, imagine how hot it'd be with just the ground air!" I've seen this a lot more at airports where 85F is considered a hot day, as opposed to airports where 105F is considered hot.

Finally, there is a lot of infrastructure and maintenance that goes into all the ground equipment and at some airports, the ground units are actually diesel powered. So at the end of the day, using PCA air and ground power probably save some money, but it definitely isn't "free."

Edit: As to the reason the PCA hose pictured is coming from the ramp instead of the jetbridge, this has to with the infrastructure setup at each airport. There are many systems that can route the PCA air underground. I assume that most of these systems use a centralized plant loop with chilled water/steam pumped throughout the terminal, then use a heat exchanger at each gate. Take a look at the recent setup at SEA for more information: SEA PCA Centralization Project. This Cavotec brochure has some interesting information and graphics as well: Cavotec Brochure (PDF)

The yellow tube you see in the photo is "in-ground air conditioning". It is more common to see it connected to the bridge.

Not the answer you're looking for? Browse other questions tagged airliner boeing-757 or ask your own question.

1
What is this yellow tube blowing air?
20
Why is air mixed with bypass air on the A/C of an aircraft?
14
What powers an aircraft prior to the APU being switched on?
26
What is this device they bring on board from the jet bridge when we park?
3
Is cabin air freshened when a plane is taxiing or on the ground?
1
HEPA filters, airliner HVAC and COVID 19

69
Why do jet engines get better fuel efficiency at high altitudes?
26
How can one enter an airliner without stairs or a jet bridge?
11
When do conditions permit doing a controlled fly-by over the runway of a commercial airport?
37
Is gravity less on an airliner at cruise altitude?
17
Does windmill restart often work for airliner engines?
5
Where can I find a cross sectional area plot for the A320 or other modern airliners?
6
What adds more weight to a twinjet? Tail-engines or wing-engines?
27
At what point does an aircraft become an airliner?
3
What is the highest number of airliners shown flying together in a single photo?
14
Did I witness an engine test for a 757 at MAN?