Components on engines, are they removed or blanked out?

As a follow up to why doesn't the A380 use outboard thrust reversers, if a component is not used in an engine, is it completely removed (hardware, wiring etc etc) or is it just made inoperative?

In the case of the A380 wouldn't it make it more difficult to maintain and handle 2 engines which are the same, but with different accessories installed?

Wouldn't it be risky as there might be human error factors whilst servicing or installing the thrust reversers?

The reverser is not installed on the outer engines. As the linked question mentions: This allows to lighten the engines, this also prevents any unwanted and hazardous opening in flight as well as the costly check time for an unused feature.

The reverser used on the A380 is a cold flow type. It is merely part of the engine by itself. It is actually integrated in the nacelle structure channeling the bypass cold flow.

An engine should be usable in all four nacelles, the nacelles themselves cannot be swapped as they provide the reverser. The answer to this question seems to confirm this possibility.

Thrust reversal on this aircraft type consists in opening the bypass duct sideways, blocking the bypass flow in the duct and redirecting it through the opening. The opening is created by sliding the aft section of the nacelle case to expose a set of vanes. The blocked flow now escapes sideways and is guided forward by the vanes: 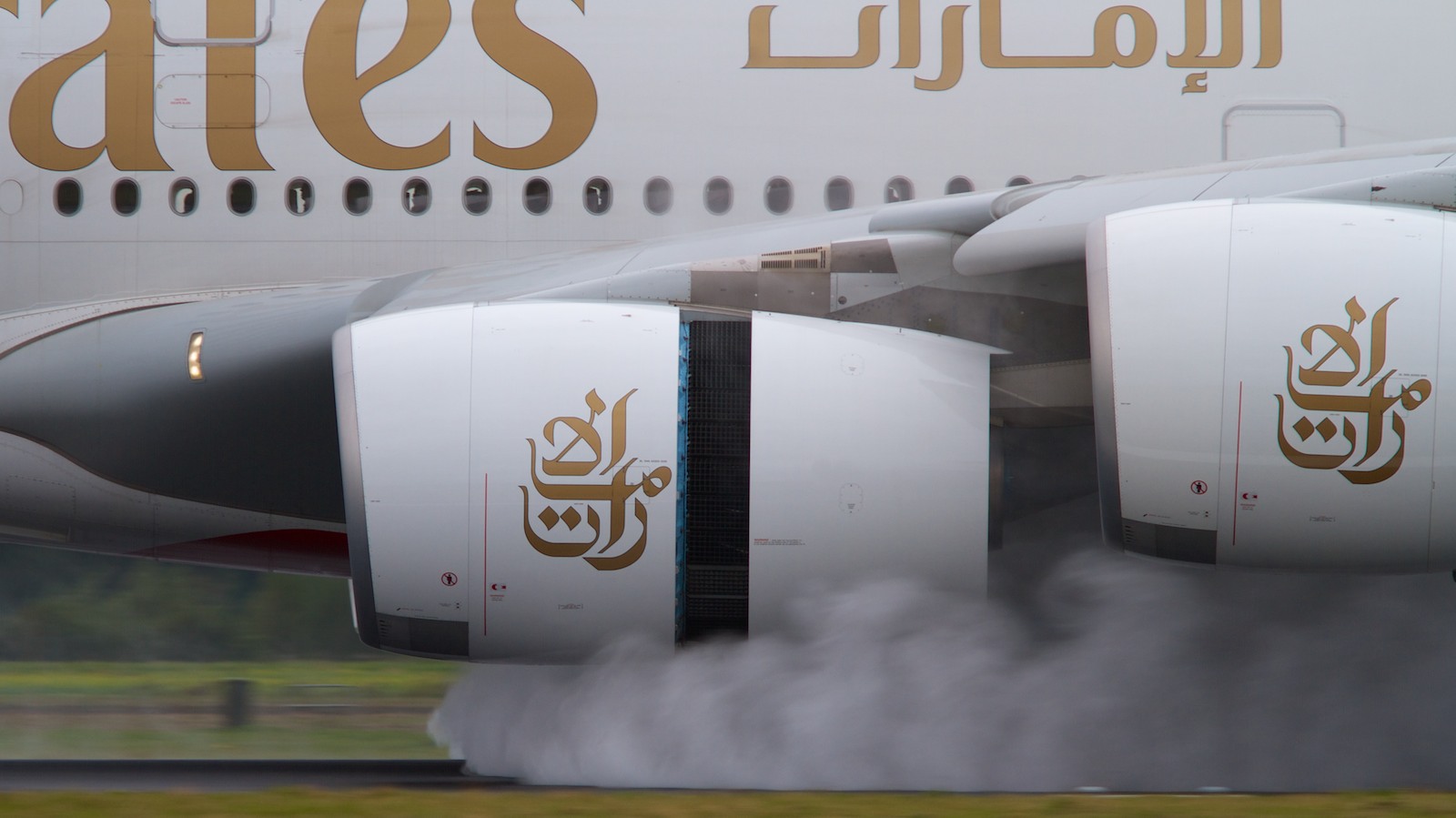 Thrust reverser on the A380 (source)

The A380 is equipped with Trent 900 from Rolls-Royce or GP7200 from Engine Alliance. The thrust reversers are made by a different provider, Airbus-Aircelle (part of Safran), which also manufactures the nacelles. This is because the thrust reverser is really integrated in the nacelle rather than linked to the engine.

The reverser is in the cold / bypass flow behind the fan section which is the engine section with the largest diameter (in the Trent 900, about 3m!). 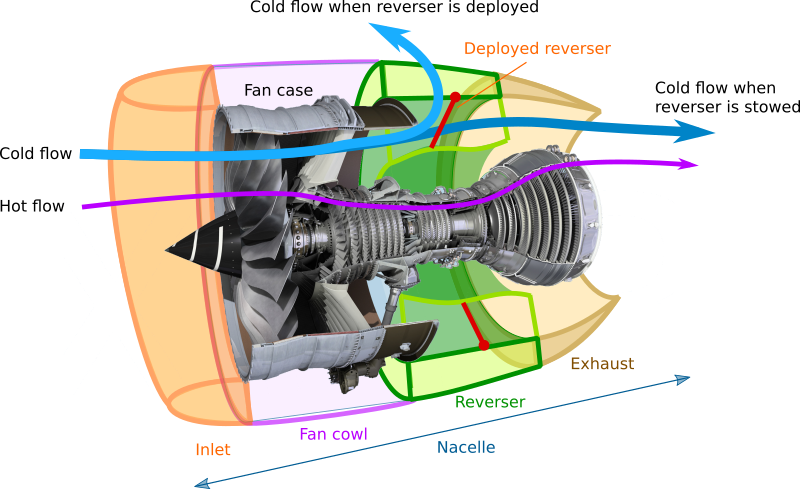 Hot flow, cold flow and reversed flow in a Trend XWB (similar to 900).
Based on RR picture

The cold flow duct (fan duct) is similar in both versions of the nacelles. The duct is fenced by two semi-annular walls behind the fan frame, where the flow is rushed by the fan. This is called a double D-duct (in reference to the shape of the semi-duct).

The two D-ducts of an inner nacelle contain the reverser panes and their associated components. This version is named the thrust reverser unit (TRU). The other version without the reverser is the fixed fan duct (FFD), it doesn't slide. 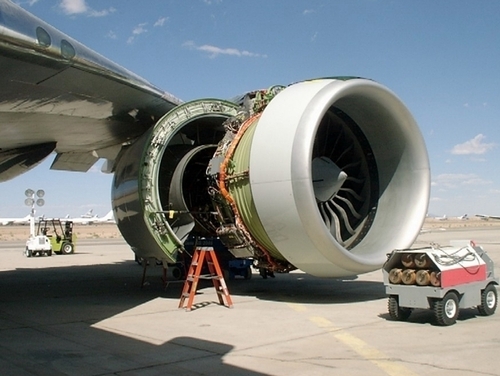 The TRU is visible behind the fan section, source

On the image above, the two halves of the TRU are open. Note the outer wall of the duct has some thickness, contrary to the FFD wall (see next). This volume is used to host the mechanism needed to move the panels rerouting the flow.

The inner wall prevents all the flow to reach the core and the components and pipes around it, in order to not create damage or drag and heat. However a limited quantity of air is still directed toward the core for cooling.

More easy to see on this CG view: 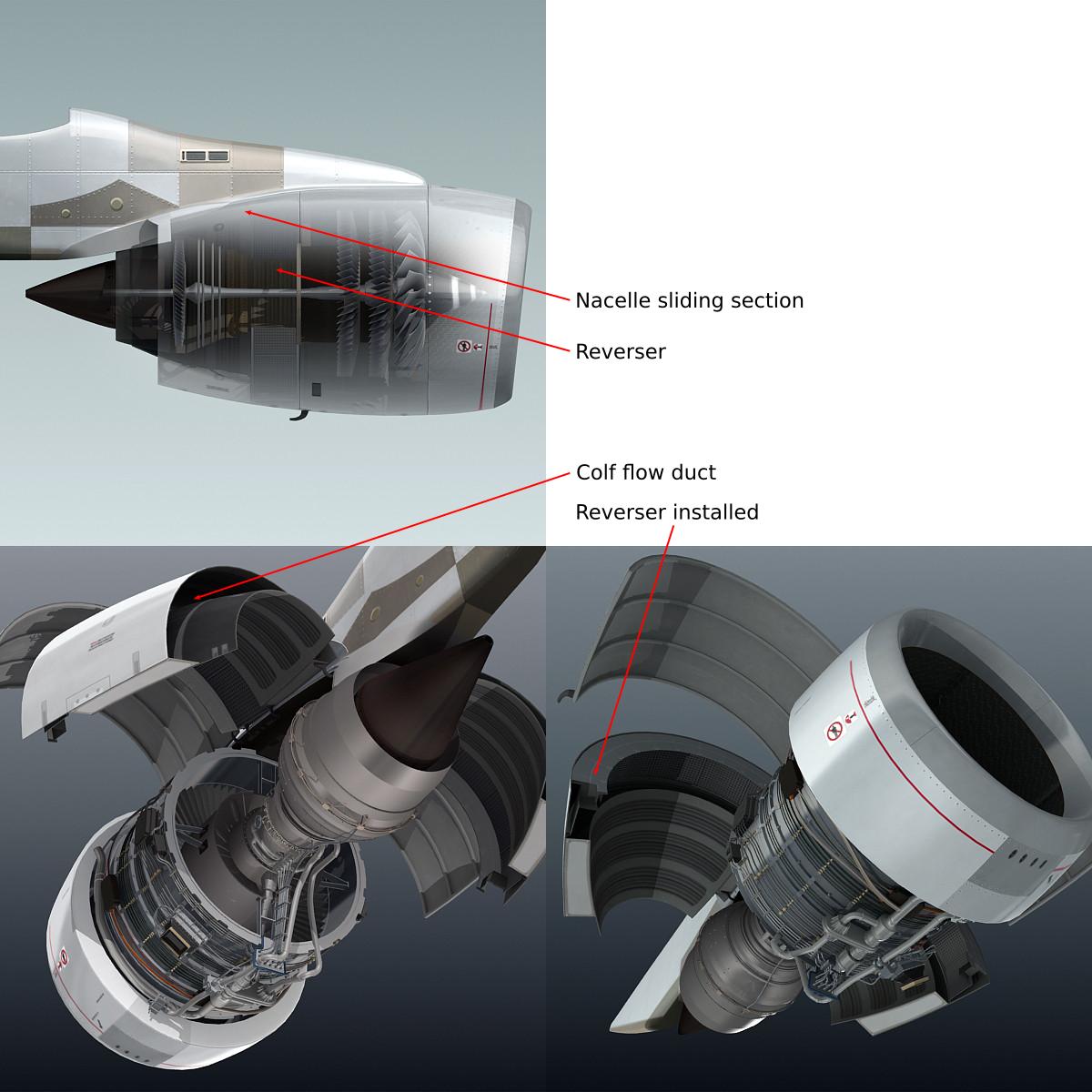 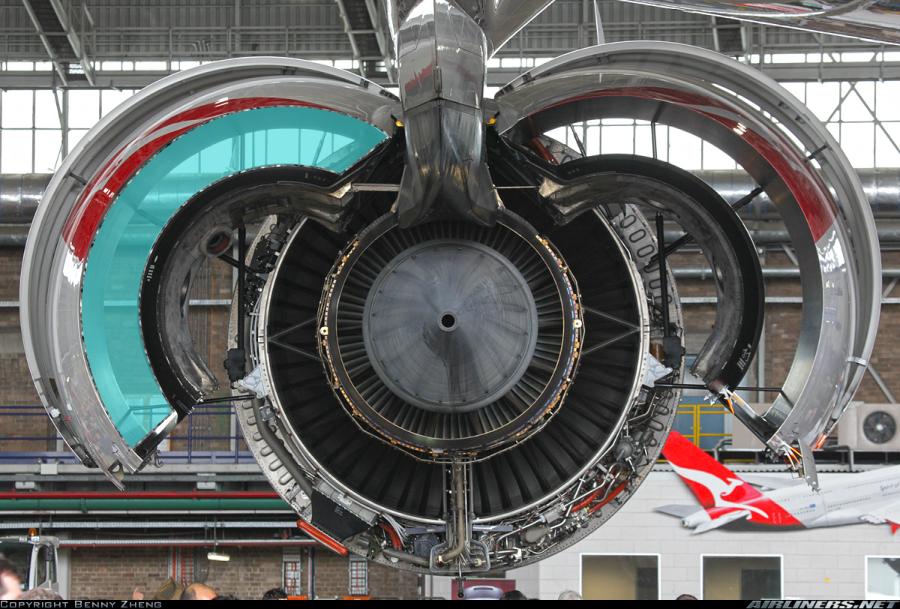 Nacelle duct for cold flow. Based on image by Benny Zheng on Airliners.net

Whether an unused component is removed or just left in place depends on how much work it is to remove it, and what the benefit would be.

In the case of the A380, a large advantage of not having thrust reversers on the outboard engines is the reduction in weight and cost, including assembly and maintenance time. This outweighs any added cost of having different parts on those engines.

Since the nacelle without thrust reversers will be lighter, it's likely that the attachment scheme is also different, preventing the wrong one from being installed.

The inboard and outboard engine pylons will already have enough inherent differences that leaving out rest of the systems required to hook up the thrust reversers is a net benefit, and there just wouldn't be anywhere to install them on the wrong engine position.

Not the answer you're looking for? Browse other questions tagged aircraft-maintenance engine thrust-reverser or ask your own question.

27
In a turbofan what holds the spinning axis?
30
Why doesn't the A380 use its outboard thrust reversers?
17
Are the A380 engines interchangeable (given they are not all equipped with reverse)?
7
Is this an accurate depiction of the internal shape of a turbofan engine?

5
Why would aircraft engines be mounted with “toe out”?
4
How is health monitoring of large aircraft engines and components done?
12
How are fuel tanks cleaned out?
8
How are engines numbered?
1
How are the NEO LEAP-1A engines attached on the A320?
3
Is there such a concept as 'Max Overhauls' for aircraft components?
4
Are all engines fan blades made out of titanium?
17
Are the A380 engines interchangeable (given they are not all equipped with reverse)?
2
Are four-engined airplanes calibrated to put out the same thrust for both their inner and outer engines?