What was the first jet-powered supersonic aircraft?

One ME-262 Pilot claims to have exceeded Mach 1 in a dive, but the conditions are disputed due to compressibility and later tests that find the aircraft uncontrollable above Mach .84. The first U.S. fighter plane to exceed Mach 1 in level flight is the F-100 Super Sabre.

For research on how the sound barrier was broken as it results to aircraft design is to read Wikipedia: Sound Barrier.

Wikipedia also has a good read on Supersonic Aircraft that lists aircraft by manufacture date.

As for technological innovations, I would suggest reading about the turbofan engine, specifically inlet design since the air must be slowed sub-sonic before entering the compressor stages.

A member of the Century Series, the F-102 was the USAF's first operational supersonic interceptor and delta-wing fighter. (Wikipedia: Convair F-102 Delta Dagger)

Its innovative "coke bottle" fuselage design to lower the drag at the wing root was critical in achieving supersonic flight. 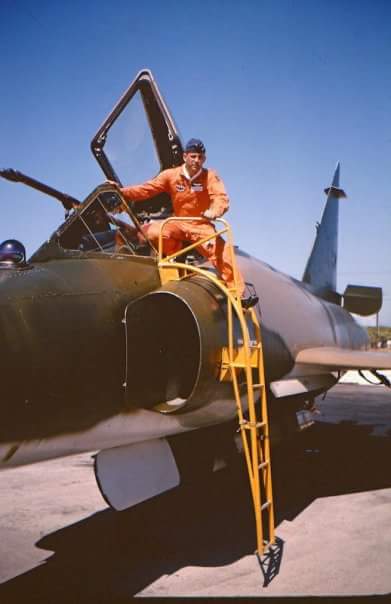 While not capable of level-flight supersonic performance, the Korean War era F-86 Sabrejet was capable of slightly exceeding Mach 1 (I recall the figure as Mach 1.05) in a shallow dive. This was one of its performance points over the (otherwise similar) MiG-15, which was Mach-limited and became nearly uncontrollable in the transonic regime.

While not generally considered "supersonic" the F-86 was capable of limited supersonic flight, and had several important features that were common to later truly supersonic designs -- sharply swept wings and fuselage-mounted drag brake panels, for example.

Not the answer you're looking for? Browse other questions tagged aircraft-design aviation-history jet supersonic or ask your own question.

16
How do pilots set the exact amount of thrust needed for a reduced power takeoff?
5
What was the first supersonic wind tunnel?
11
Who was the first black person (in the world) to go airborne in an aircraft?
20
What is the smallest manned jet aircraft?
17
Why did the turbojet replace the piston engine?
2
What mechanism or design aspect prevents jet blast from escaping the front of a Ramjet or scram jet?
3
What are some of the fastest UAVs? How do the pilots ensure that their controls are being transmitted to actions?
10
When were the last subsonic turbojet-powered airliners retired from commercial passenger service?
44
Why was Concorde never sold as a private business jet?
4
Could the Olympus 593 have been windmill-restarted during supersonic flight?